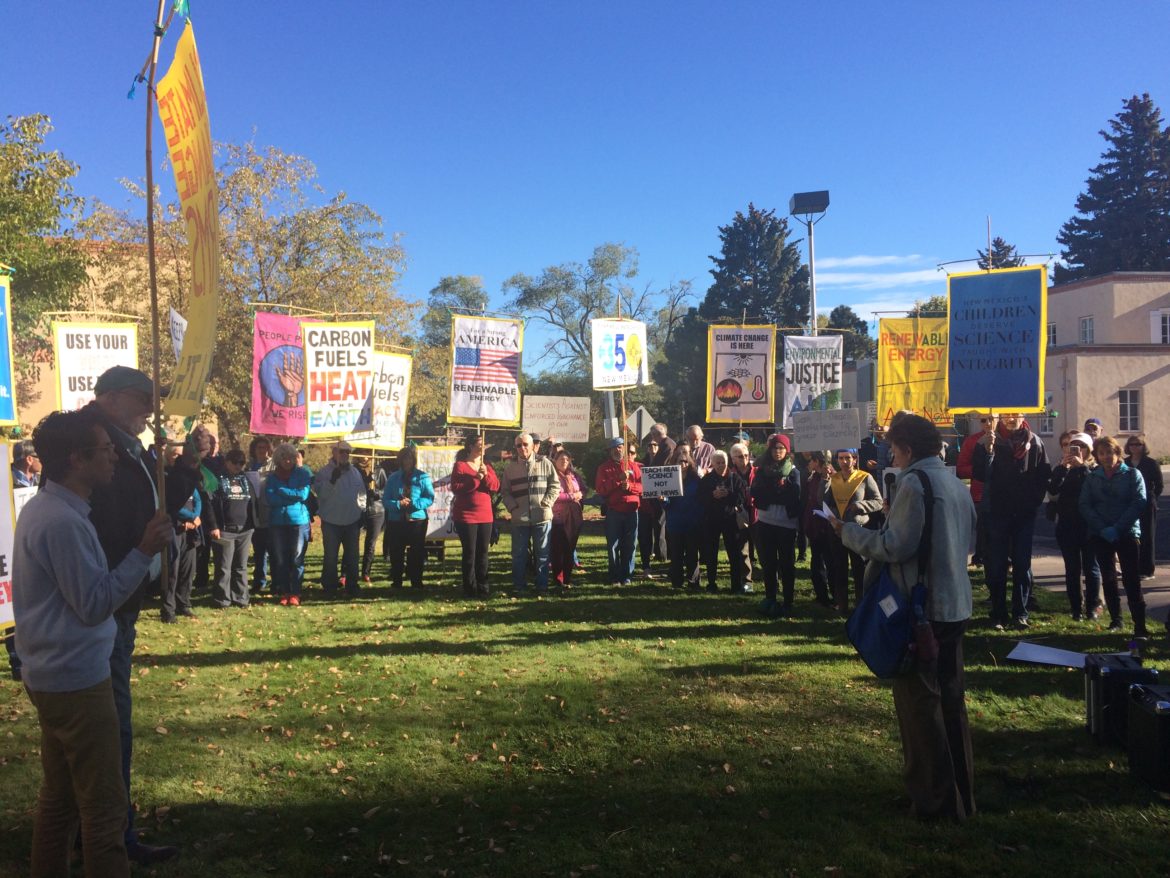 On Monday morning, people rallied in front of the PED hearing, supporting the Next Generation Science Standards

Hundreds of people turned out in Santa Fe on Monday to oppose the state’s plans to enact science standards that left out facts on climate change and evolution.

Now, the head of the Public Education Department (PED) says he has reconsidered those controversial changes.

Under PED’s original proposal, New Mexico would implement Next Generation Science Standards (NGSS), which have been developed and recommended by scientists and educators. But the department planned to adopt those standards with some key changes, including to lessons on climate change, evolution and the Earth’s geological age.

Public Education Department (PED) acting Secretary Christopher Ruszkowski didn’t attend that hearing, during which not one person gave public comment in support of the altered standards.

But on Tuesday night, Ruszkowski released a statement to the Santa Fe New Mexican and the Albuquerque Journal. Upon request, PED public information officer Lida Alikhani forwarded the statement to NM Political Report.

The New Mexico Stem-Ready Science proposal discussed this past month was built considering standards adopted in other states as well as input from New Mexicans. Many states that have adopted higher standards have made adjustments based upon input from their communities.  New Mexico is no different.

Similar to the process in other states, our goal in holding a public hearing is to ensure all those who wanted to discuss these proposed standards would be heard. We have listened to the thoughtful input received and will incorporate many of the suggestions into the New Mexico Standards.

The hearing came at the end of a 30-day public comment period.

The altered science standards appear to have been controversial within the department, as well. According to a story in the Santa Fe Reporter, one person involved in writing the standards quit rather than be involved:

One year ago, [Lesley] Galyas wrote her final version of the state’s new science standards before she quit her position at the Public Education Department. She was the Math and Science Bureau director. It was all she could stomach.

“I was the only one in the building who understood the standards,” she said. “And then I had to report to my superiors and they would say, ‘Nope, you didn’t take enough out.’” Among other things, she was told to get rid of language referencing the age of the Earth and to alter references to human-caused climate change and evolution.

The bottom line for Galyas was simple: “I didn’t want my name on something that isn’t what it’s meant to be.”

NM Political Report reached out to the governor’s office for comment. We’ll update the story when we hear back from her spokesman, Joseph Cueto.

The second round of proposed standards do not appear to be the unaltered Next Generation Science Standards, but they do represent significant changes from those proposed last month.

PED’s emailed statement included some information about specific changes in the proposed standards for middle school and high school classes. It also noted that “Despite false and misleading comments to the contrary, the NM Stem-Ready Proposal mentioned evolution in several areas [in the high school standard], not just one.”

It remains to be seen how the process will move forward, but for now, many proponents of Next Generation Science Standards are happy.

“I am thrilled to hear of the changes back to original NGSS language and look forward to seeing what other changes come as a result of public comments,” said Eileen Everett, executive director of the Environmental Education Association of New Mexico. “In particular, our organization hopes to see the inclusion of the crosscutting concepts, disciplinary core ideas, and science and engineering practices of NGSS along with a thoughtful plan for implementation.”

Monday’s hearing also drew criticism. State Sen. Bill Soules, D-Las Cruces, said he would file a formal complaint that it violated the state’s Open Meetings Act because PED did not provide access to everyone who wished to attend. The large crowd meant that hundreds of people waited outside the building, where they could not listen to the hearing, before having their name called for public comment.