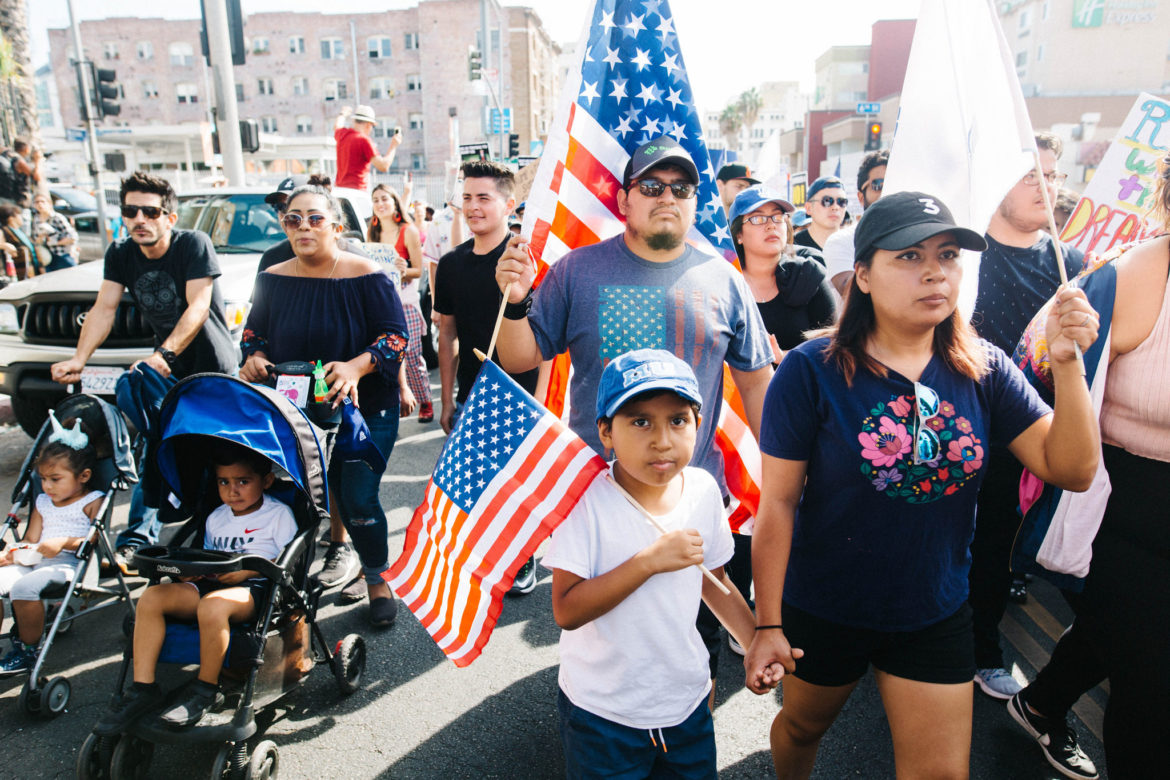 Families march during the Los Angeles March for Immigrant Rights that called for the end the surveillance, deportations, and criminalization of undocumented peoples. DACA protects hundreds of thousands of undocumented immigrants, who arrived as children, from deportation. Flickr cc

An immigration attorney I know shared a document with me recently: an appeal sent to the U.S. Department of Justice Board of Immigration, the government office that interprets and applies immigration laws. The document told the story of how in the summer of 2014, at the height of the humanitarian crisis at the U.S.-Mexico border that brought tens of thousands of unaccompanied child migrants seeking asylum, Border Patrol agents stopped one child (referred to simply as “Y-F”) and interrogated him in Spanish. “Why did you leave your home country or country of last residence?” the officers asked. “To look for work,” Y-F allegedly told them. At the time of the interrogation, Y-F was only three years old.

That’s right: a toddler coming to the U.S. looking for work. It turned out Y-F’s testimony was not a verbatim transcription of the interrogation, prompting the lawyers filing the appeal to question its veracity. Whether Y-F’s response turns out to be real, the story reflects the power of the core reason — and the myth — of why many immigrants come to this country.

Attorney General Jeff Sessions blamed young immigrants for taking jobs from Americans in September, when he announced the end of the Deferred Action for Childhood Arrivals (DACA) program. That program protects almost 800,000 undocumented immigrants who arrived as children from deportation. “(DACA) denied jobs to hundreds of thousands of Americans, by allowing those same illegal aliens to take those jobs,” he said.

The problem is, there is no truth to the claim. Contrary to popular belief, immigrants do not take away jobs from Americans but create new ones, by starting new businesses (especially small businesses), and by bringing more money into the economy by paying taxes and spending what they earn on U.S. services and goods. This can be said about an undocumented agricultural worker from Mexico or a high-tech professional from China.

“That old argument is that people come from abroad and take a limited number of jobs, but that is too simplifying and false,” says Dany Bahar, an economist at the Brookings Institution who is also an immigrant by way of Israel and Venezuela. “Due to their very nature, immigrants are entrepreneurial: Moving to a new country is an entrepreneurial act that’s filled with risks,” he says. To immigrate means taking the calculated risk of uprooting yourself, planning for work and living arrangements, and taking a big leap of faith into the future. In fact, according to a report by the Partnership for a New American Economy, immigrants are model businesspeople: They are more than twice as likely to start a business as the native-born. In 2016, 40.2 percent of Fortune 500 companies had at least one founder who was an immigrant or the child of immigrants.

Also, explains Bahar, the U.S. economy is fluid. If you add more workers to a particular industry, that does not necessarily mean that other workers in that industry will earn less or lose their jobs. By increasing the supply of labor, immigrants simultaneously increase a demand for it, generating more work not just for themselves but in other industries beyond their own — for the people and businesses from whom they rent their apartments, buy their food or get their car insurance, to list a few.

These days, there is widespread consensus among economists that immigrant workers benefit the U.S. economy. That argument is backed up by one of the country’s leading labor economists, Giovanni Peri of the University of California, Davis, (another immigrant), who argues that in today’s global economy, countries can quickly adapt to the influx of foreign workers because those workers’ skills — alongside their cultural background and diverse work experience — tend to complement the skills of the already existing work force. Think of it this way: People from around the world bring different skills with them. This diversity of talent is a boon to the economy of rich countries in particular, because it leads to more innovation and productivity and in turn, more jobs.

Peri has found this positive cycle to be true across the immigrant labor force, from low-wage workers to highly paid professionals.

But let’s assume stealing jobs were indeed possible. Why then don’t we make the same claim about college graduates new to the job market or Americans who move from one state to another for work? It is simply not patriotic to do so. Immigrants’ “otherness” has always made them an easy, albeit misguided, target.

Publicly blaming foreigners for stealing jobs has long been an American tradition: Think back to the mid-19th century, when nearly two million Irish refugees fleeing the famine settled in Boston and New York, taking low-paying jobs as blacksmiths, textile workers and builders in spite of “No Irish Need Apply” signs.

“The current wave of protectionism is nothing new,” says Bahar. But the scapegoating may already be damaging the economy: New government data show foreign workers’ interest in U.S. jobs is down under Trump. If the president’s current proposal to cut many work visas by half goes through, the protectionist measure would lead to a loss in technology jobs and lesser competition in the global market. For industries that depend on low-income immigrant workers such as agriculture or the service industry, the current rise in deportations and anti-immigrant rhetoric is already taking a toll. “Ultimately, that could bring about an economic slowdown, which would be a dangerous proposition at this time.”