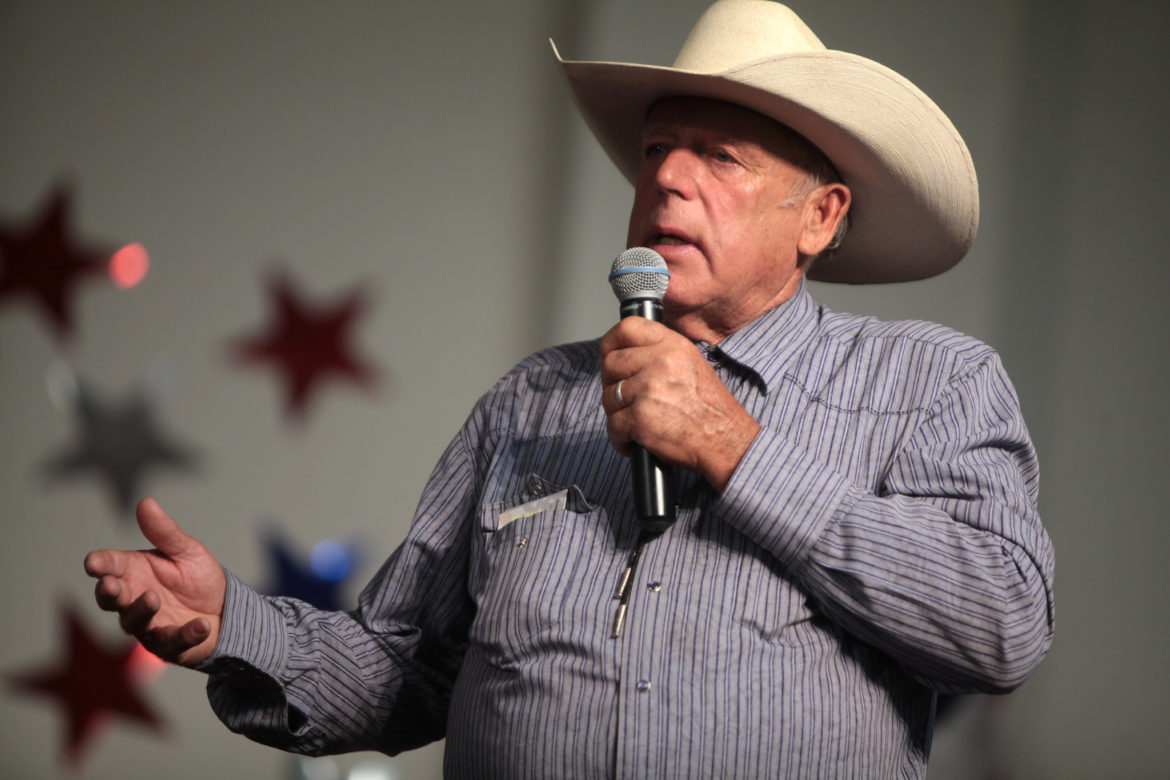 Cliven Bundy speaking at a forum hosted by the American Academy for Constitutional Education (AAFCE) at the Burke Basic School in Mesa, Arizona. Flickr cc

When the third in a series of trials over the 2014 Bundy Ranch standoff in Nevada gets underway, prosecutors will be able to use testimony from an expert in extremism and domestic terrorism, the judge in the case has ruled.

Defense attorneys for one of the accused Bundy supporters, Ryan Payne, of Montana, had sought to keep much of the federal agent’s testimony out of the case, saying his expertise on militias and terrorism would prejudice the jury.

Jury selection for the trial—which includes Payne, Cliven Bundy and his sons Ammon and Ryan—begins next week. The men are facing a raft of charges related to the armed confrontation, near Bunkerville, Nevada, which prevented federal agents from confiscating cattle that had been illegally grazing on public land for decades.

The trial was postponed following October’s mass shooting in Las Vegas, where the trial will be held. Defense also sought not to prejudice the jury on firearms, underscoring how hard attorneys are working to keep the Bundys separate in the minds of a public from a great deal of gun violence in the years since the standoff.

In September, Payne’s attorneys motioned to limit the testimony of FBI agent Mark Seyler, including details about his expertise. Seyler “was routinely tasked with ‘domestic terrorism’ investigations,” and “routinely investigates ‘militia’ matters,” the defense said. “The effect this information will have on the jury is that of believing that this is a domestic terrorism case involving militias.”

Domestic terrorism did not factor much into two previous trials of Bundy supporters, earlier this year. Prosecutors said explicitly they were not trying to prove the defendants were “domestic terrorists.” But in a response to Payne’s motion, Acting U.S. Attorney Steven Myhre wrote that Seyler’s expertise would provide context and credibility to his investigation of Payne, which had begun in 2013. “The government will present evidence that Payne was looking for an opportunity to have a forcible confrontation with government agents and that Bundy Ranch provided that opportunity,” Myhre said.

U.S. District Court Judge Gloria Navarro on Tuesday sided in part with the prosecution, ruling that the agent’s expertise would be allowed in court. However, she warned prosecutors in her decision “to keep any such testimony brief and limited in order to minimize any prejudice.”

Navarro made a similar ruling in a related trial earlier this year, though prosecutors stayed away from the topic of terrorism anyway. Todd Leventhal, a defense attorney for Scott Drexler, who was part of that case, told me that in previous trials, government witnesses briefly mentioned the 1995 Oklahoma City bomber Timothy McVeigh and referenced ISIS—both of which the defense objected to.

But Payne’s recent motion to exclude the topic from testimony points to the defense’s desire to keep broader questions in the national conversation out of the courtroom. The trial is taking place just weeks after the deadliest mass shooting in recent U.S. history. That shooting, along with the 2016 armed takeover of Oregon’s Malheur National Wildlife Refuge, also by Bundys and their supporters, may prove hard to keep out of the minds of prospective jurors.

Threats of violence and mass shootings have become a major point of political contention in recent years, including questions about various applications of the Second Amendment. Following the Las Vegas shooting; the death of a counter-protester at a white supremacist rally in Charlottesville, Virginia; and other acts of violence throughout the country in recent years, more and more critics question why the term “domestic terrorism” is not more commonly used, if not in legal circles, at least in media reports.

In fact, how authorities describe domestic terrorism is complicated. Nearly every agency that deals with the issue has its own definition. U.S. legal code defines domestic terrorism as an illegal act that is dangerous to human life and motivated by a desire to influence government policy. (“Terrorism” is defined differently, based on the individual’s ties to any of the 60 or so groups, mostly Islamic extremist, that the State Department deems terrorist organizations.) Thus, despite the horror he caused, authorities aren’t using the term to describe the Vegas shooter, Stephen Paddock, who killed 58 people and himself, and injured at least 500 more.

Many experts say even when a perpetrator of mass violence is clearly tied to extremist beliefs, authorities are reluctant to define his actions as terrorism. For example, the term wasn’t initially used to describe Joseph Stack, who flew a small plane into an Internal Revenue Service building in Texas in 2010 and left a long note about his hatred for the federal government. Dylann Roof, the white supremacist who killed nine black churchgoers in South Carolina in 2015, didn’t get the moniker either. These men were white—as are the defendants in the upcoming Bundy trial. Critics of the Bundys say this shows the defendants may be getting a break that is a part of America’s cultural fabric.

Muslim Americans are often more readily deemed terrorists than other Americans, says Daryl Johnson, a law enforcement consultant and former counterterrorism expert at the Department of Homeland Security: “A different standard is being applied to Muslims than to other people,” he told Reuters. A recent Reuters study found that in 100 federal cases, people accused of acting on behalf of Islamic State faced stronger charges than suspects of domestic terrorism. And yet the majority of terror incidents in the U.S. are perpetrated by right-wing extremists, according to nine years of data collected by the Investigative Fund at the Nation Institute.

As for the standoff trials, some observers argue the actions of the Bundys and their key supporters in Bunkerville should in fact be considered domestic terrorism. Erroll Southers, director of the Homegrown Violent Extremism Studies Program at the University of Southern California and former member of the FBI, said the Bundys’ actions fit the basic definition. “Any time you have a group threatening to use violence against civilians (in this case, police officers) to further their belief, they qualify to me,” he said in an interview. “I’m just looking at it from a definitional standpoint. When we had the Black Panther Party and the Weathermen in the ’60s doing this, there was no question about what we called them. The only difference now to me is the date.”

In last year’s primary Malheur occupation trial, the topic barely came up. “I remember someone from the government saying they were never going use that word and had no intention of doing that,” defense attorney Matt Schindler said in an interview. “And it would have just made the government in another fashion look like it was overreaching.”

Tay Wiles is an associate editor at High Country News and can be reached at taywiles@hcn.org.