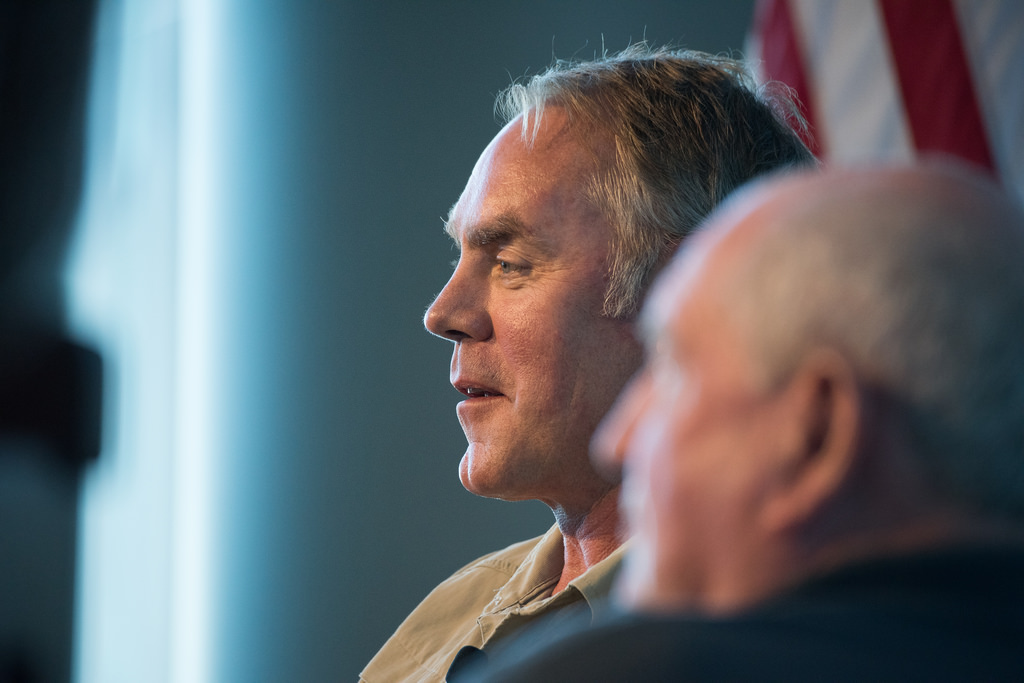 In recent weeks, Interior Secretary Ryan Zinke has taken a lot of heat for his decisions. Conservation groups have lambasted him over the secretiveness of his department’s monuments review. The final review has yet to be made public, though a draft of the report leaked to the press in September. Conservationists have also critiqued his moves to undo years of collaborative planning for sage grouse protection.

Amid all this, several events have come to light that raise questions about Zinke’s ethical practices. The now-revoked Whitefish Energy contract for grid repair in Puerto Rico — though the tiny firm hails from his hometown, Zinke denies any involvement — is only the latest example. Some of his rumored transgressions have quickly dissipated; for example, he reportedly laughed off claims that he threatened Alaska senators Lisa Murkowski and Dan Sullivan before a health care vote. He tweeted a photo of himself and Murkowski sharing beers a few days later. But some of the controversies — including allegations that Zinke has mixed professional and personal business, dodged campaign finance laws and generally demonstrated dubious ethics — have led watchdog groups to call for investigations. Here are the Zinke scandals we’re watching.

The Interior secretary has helped raise money for political operatives accused of collecting donations from conservative voters while doing little for their cause. Political consultant Scott Mackenzie in particular operates multiple “scam PACs” that some Republican lawmakers have accused of giving little collected money to the PACs stated causes, and instead give the majority to consultants who run them.

Zinke paid one email marketing firm associated with Mackenzie, now known as ForthRight Strategy but earlier called Base Connect, close to $800,000. According to government watchdog group Campaign for Accountability, the firm’s website included a quote from Zinke endorsing its work, though the quote appears to have since been removed. Campaign for Accountability has called on the Office of Government Ethics to investigate whether this violates ethics rules prohibiting federal employees from endorsing private entities.

Attending political events while on duty

The Office of Special Counsel is investigating Zinke’s travel and political activities, looking into multiple occasions when the secretary attended political fundraisers on official trips. These occasions may constitute violations of the Hatch Act, which prohibits on-duty executive branch employees from engaging in political activities. The fundraisers include a ski weekend in Big Sky, Montana, that donors paid $3,000 to attend and a Virgin Islands Republican Party fundraiser where donors paid up to $5,000 to take a photo with Zinke. Known as VIGOP, the Virgin Island Republican Party is also allegedly a “scam PAC” run by Scott Mackenzie.

According to documents obtained by The Washington Post, Zinke took a $12,375 ride home from an official trip to Las Vegas last June in a plane owned by oil and gas executives. Democrats in the House suggested that this flight and others paid for with taxpayer dollars may not have been appropriate government expenses. Though the Interior Department maintains that Zinke takes charter flights only when a reasonable commercial option isn’t available, the department’s Office of Inspector General has launched an investigation of his travel.

Campaign for Accountability has called on the Office of Special Counsel and the Inspector General at the U.S. Department of Interior to investigate whether this event constituted a violation of conflict of interest laws or of the Hatch Act. “Rather than putting America first, Zinke is putting a top donor first,” said Daniel Stevens, the group’s executive director.

Selling a campaign RV for cheap

Zinke’s campaign committee sold a 2004 Kountry Star Freightliner to a friend of his in the Montana Legislature for cheap back in June. Worth about $50,000, the recreational vehicle was sold for just half that. The Federal Election Commission prohibits the sale of assets by political committees for less than their fair market value. The government watchdog Campaign Legal Center has filed a Federal Election Commission complaint, calling for an investigation. Montana Sen. Ed Buttrey, who bought the RV, said the vehicle had some damage that affected its value. Buttrey is rumored to be up for appointment as assistant Interior secretary.

Rebecca Worby is an editorial fellow at High Country News.