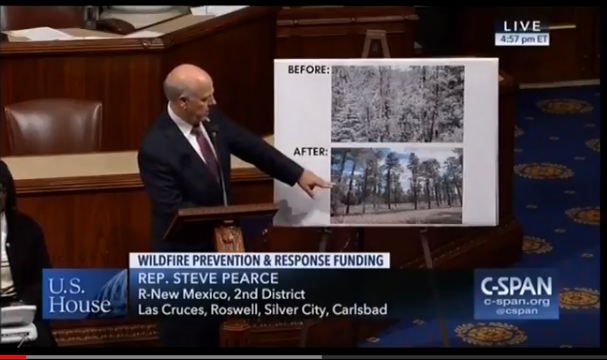 The U.S. House of Representatives passed a bill with a provision that could have a big impact on three national forests in southern New Mexico.

Speaking on the House floor, Pearce said thinning and logging activities in New Mexico and across the western United States have been “drastically reduced,” contributing to the size and severity of wildfires. “The best way to restore our forests while preserving their ecosystems is the creation of restoration projects that will return them a healthy density,” Pearce said. “The sooner these restorations efforts begin, the sooner we can begin avoiding catastrophic events that damage the safety and future of New Mexico families and businesses.”

If passed into law, Pearce’s amendment would create a pilot project for the three national forests within his congressional district—the Lincoln, Cibola, and Gila—and exclude certain projects there from environmental studies. It would also require the U.S. Fish and Wildlife Service to perform expedited endangered species consultation. If that consultation is not completed within 90 days, the Forest Service can then automatically proceed with the project. Under the pilot project, the federal government also would be barred from carrying out those forest projects if counties object.

Pearce, a Republican who represents southern New Mexico, is running for governor in 2018.

In response to questions about the amendment, Pearce’s office explained that under the proposed process, the U.S. Forest Service will identify “high risk” areas that need to be treated and will then work with counties. Once counties approve, the federal agency will be able to “conduct the projects in an expedited manner.”

According to his office, the bill will also “provide certainty” to companies by allowing projects to move forward more quickly and allow the U.S. Forest Service to do large enough projects to attract interest from companies.

Bill is a “solution looking for a problem”

There is widespread consensus on the need for forest thinning projects across the state. But not everyone agrees that cutting environmental oversight is the best option to move critical forest projects forward.

Bird called the amendment, and the overarching bill, a “solution looking for a problem.” It ignores the science on forests and wildfire, he said, and ignores the real problem—a lack of funding for the U.S. Forest Service.

Currently, the agency pays for fire suppression and wildfires out of its regular budget, siphoning money away from restoration, forest thinning projects and other programs.

Bird said significant hazardous fuels treatment projects already exist across the state, and questioned why no forests in northern New Mexico were included in the congressman’s amendment.

“To what end is he doing this? Who is he trying to please?” Bird asked. “Most people in New Mexico care deeply about their water and their wildlife, and want to ensure that both are protected, and that one isn’t sacrificed for the other. This is just of his overall agenda to dismantle our environmental legacy in this country.”

Since the 1980s, an increasing number of fires of over 1,000 acres have burned in the western United States. They come on the heels of decades of fire suppression, which has led to overly dense forests. But it isn’t just dense forests. As the climate warms, the sheer number of fires has grown, too, and the wildfire season has lengthened by about two months.

According to the Southwest Coordination Center, in New Mexico this year, the Forest Service has conducted prescribed burns on more than 28,000 acres. That includes  2,861 acres on the Cibola, 9,200 on the Gila and 8,091 on the Lincoln.

These prescribed burns help reduce the fuel in forests and prevent large-scale fires like those experienced in recent years in New Mexico and across the West.

Already this year, more federal forest lands have been treated than in recent years. The 2017 numbers are up from 23,808 acres treated in 2016 and 9,196 acres in 2015. As of late October, there have been a total of 66 prescribed fires in New Mexico on 85,782 acres across different state and federal jurisdictions.

“Ready to step up and do the job”

According to a list included with a press release from Pearce’s office, the Resilient Federal Forests Act of 2017 has “strong support” from nearly 100 groups, including the New Mexico Coalition of Conservation Districts and the New Mexico Forest Industry Association.

Reading the amendment on Thursday night after work, New Mexico Forest Industry Association President Brent Racher said he hadn’t discussed it with Pearce or his staff. “But I can say that if it expedites active management and thinning and work in those three forests, our industry members are ready to step up and do the job,” he said. “Looking at the bill itself, what we hope to see in the future is increased forest management, both to reduce the catastrophic wildfires that are occurring but also to give our members work and jobs and access to the raw materials we use to make products.”

The trade group’s members are varied, Racher explained, ranging from contractors on thinning projects to people who harvest firewood. “We also have members that harvest the small-diameter timber and are making pellets, shavings, even some lumber—though we don’t have a lot of that left in New Mexico, simply because of the size of the wood we’re getting out of the forest,” he said. “Most of our members do something in between, a blend of doing that service contract work and then getting the wood off it. And if it’s low-value wood, making some product out of it, trying to get some value.”

Some larger trees need to come out of the forest, he said, but the key issue right now is removing the overabundance of small trees.

“Our members would like to have the opportunity both to increase their treatments on the national forest, for forest health, forest resilience and wildfire mitigation,” he said. “But also for many of us that are making some type of a product out of it, we need an adequate wood supply and a consistent wood supply out of theses forest in order to invest in infrastructure that will help pay for some of the treatment costs.”

If there are only small or intermittent projects, people can’t invest in infrastructure like sawmills or pellet mills, he said. That often means the wood goes to waste. It’s left on the ground, burned or chipped on site.

Already, the Cibola National Forest has been working on thinning projects, he said, but the Gila and the Lincoln lag behind. “Those two forests are where we’ve seen in the last ten years, the largest fire in New Mexico and also the most destructive fire in New Mexico, as far as the number of homes burned,” he said. “We need to accelerate active forest management and make forests more resilient to wildfire there as well.”

The nonprofit Forest Stewards Guild frequently works with the Forest Service as well as small companies and communities across New Mexico.

“I understand where Pearce’s concern comes from: there is a perception out there that worrying about these little critters is somehow stopping us from doing the work we need to do in the forest,” said Alexander Evans, executive director of Forest Stewards Guild. “I think that if you talk to people in the field and look at places on the ground and get beyond the rhetoric and get into how this stuff works, in my experience, usually there’s collaboration, people working together and we all have the same goal.”

Whether it’s a federal agency like the U.S. Fish and Wildlife Service, which enforces the Endangered Species Act, or the Forest Service, entrepreneurs with small-scale timber companies or community members, he said, many people want to ensure forests are healthy. That means doing thinning and restoration projects—and following federal laws that protect forests and wildlife.

“There’s the question of how we make that happen, and I don’t think saying, ‘We don’t need to worry about this anymore’ by fiat is the right approach,” he said of plans to sidestep NEPA and the Endangered Species Act.

Logging in New Mexico has been a hard business for decades, with few exceptions. But that’s not due to environmental laws.

“Dream timber” is from large, older trees that yield wide boards, Evans said. That’s not what New Mexico’s forests are comprised of, and it’s certainly not what comes out of thinning projects, which reduce the risk of wildfire by cutting and clearing younger trees and brush.

It’s hard to find a market for those young, small-diameter trees, said Evans, though some entrepreneurs have done their best. Some sell that wood for coyote fences and firewood, he said, and slightly larger trees can be harvested for vigas.

“It’s not like in plantation forests in places like Georgia, where it’s all going to one mill and you know exactly what’s going to happen with it, like one train coming out of the forest,” Evans said. “Here, you’re looking at every piece and asking, ‘What can I turn it into?’”

Those programs include the Zuni Mountains Collaborative Forest Landscape Restoration Program in the Cibola National Forest and the Southwest Jemez Mountains Collaborative Forest Landscape Restoration Project (CFLRP) in the Santa Fe National Forest. Since the Jemez  program began in 2010, it has treated more than 45,000 acres through hand and mechanical thinning and prescribed fire projects.

Congress funded those projects for ten years when it passed the 2009 Forest Landscape Restoration Act. That act promoted collaborative, science-based ecosystem restoration in certain areas identified as priorities by the U.S. Secretary of Agriculture, who also oversees the Forest Service.

“I would love to see that collaborative focus and mode of doing business continue not only to get support but to be expanded,” Evans said. “There should be a CFLRP in the Sacramento Mountains (in the Lincoln National Forest) or maybe in the Gila.”

He also said the agency is understaffed and its employees already have extra duties.

“If you can’t hire the person who makes the maps, or enough techs to mark the timber, you can’t move these projects forward,” he said. Supporting the agency’s budget would do more to move projects forward that eliminating environmental reviews.

“There’s a feeling right now, a negative view of federal work and an effort to downsize the federal government,” he said. “I get that from a taxpayer’s perspective or a budget perspective, but I’m firmly convinced that investing in our forest and our public lands has huge paybacks.”

New Mexico’s Democratic Reps. Ben Ray Luján and Michelle Lujan Grisham both voted against Pearce’s amendment and the bill itself.

“The Congresswoman supports bringing all parties to the table to reach a consensus—ranchers, industry, tribes, landowners, environmentalists, and other stakeholders—and honoring their decisions,” said Gilbert Gallegos, spokesman for Lujan Grisham, who is also running for governor in 2018. “Removing the public’s ability to provide input on issues that directly impact them is undemocratic.” The amendment limits the number of arbitrations that can occur on projects within the pilot project.

Gallegos added that while the forests “definitely need to be cleaned,” the underlying bill fails to fix the borrowing issue and will make it harder for the U.S. Forest Service to put out wildfires.