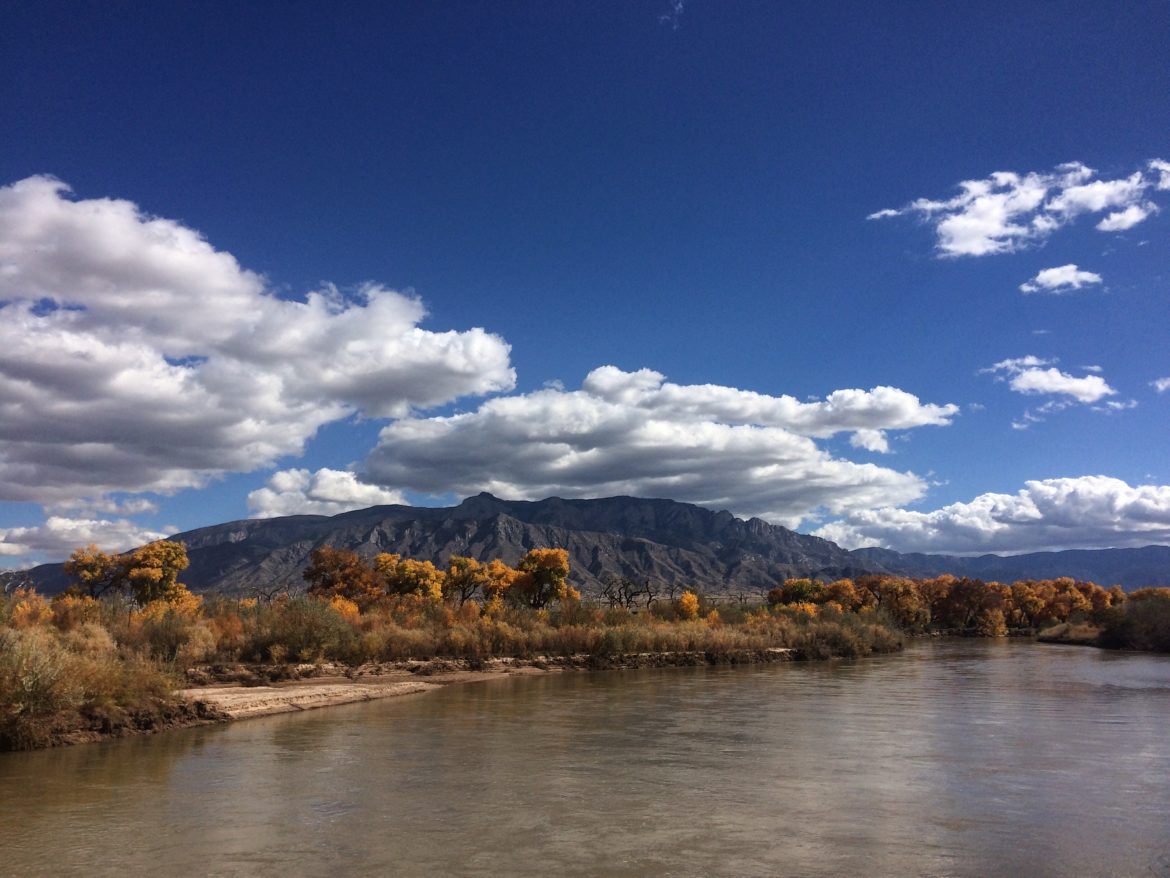 The Rio Grande north of Albuquerque. Even in a year with good snowpack, Elephant Butte Reservoir is still low downstream.

“I’m openly skeptical we’ll ever be able to fill Elephant Butte Reservoir again,” Dr. David Gutzler told attendees of a recent climate change conference. That’s given the trend toward diminished flows in the Rio Grande resulting from the continued global rise in temperature.

The University of New Mexico Earth and Planetary Studies Department professor delivered the grim news on a crisp, yellow and blue fall morning along the bosque in Albuquerque.

Since the U.S. Bureau of Reclamation completed the reservoir in 1916 to supply farmers in southern New Mexico and Texas with water, the reservoir’s levels have fluctuated—from highs in the 1940s to lows in the 1950s, ‘60s, and ‘70s. Many New Mexicans are familiar with the wet period that lasted from 1984 through 1993; between 1980 and 2006, the state’s population increased by 50 percent. But then the region was hit with drier conditions—and increasing temperatures. Areas of the Southwest have suffered from drought since 1999 and, unlike earlier droughts, it’s driven not just by a lack of precipitation, but a rise in temperature.

Even with good snowpack in southern Colorado and northern New Mexico the past few years, there simply isn’t enough water to boost the reservoir’s levels again, said Gutzler, who is also one of the lead authors of the Intergovernmental Panel on Climate Change’s 2013 Assessment Report. The reservoir is currently at just 15 percent capacity.

Levels in Elephant Butte Reservoir on the Rio Grande in southern New Mexico from the Texas Water Development Board. View data at: https://waterdatafortexas.org/reservoirs/individual/elephant-butte

“It is a lot warmer here now than it was a generation ago,” said Gutzler—about three degrees Fahrenheit warmer. And by the end of the century, New Mexico could be four to six degrees warmer.

Seven years ago, Gutzler and a colleague published a paper about rising temperature trends in central New Mexico. “By the end of the 21st century, Albuquerque’s temperature will be the current temperature of El Paso,” he said, noting that the vegetation in the Franklin Mountains flanking the west Texas city look very different from the Sandias, which still have aspens and conifers in higher elevations. “The climate in El Paso is significantly different from Albuquerque even though we get roughly the same precipitation.”

Pointing to the screen behind him, Gutzler drew attention to the red temperature curve. “That red curve is headed up,” he said. “And the choices we make will determine how much higher that will go.”

Warming in the American Southwest is occurring at about double the global rate—and that local warming will have a profound impact on water resources in the Interior West. Those changes in water supply will occur regardless of changes in precipitation, he said.

Gutzler added, “There is nothing the slightest bit hypothetical about this warming.”

On Friday, the U.S. government released its Climate Change Special Report and the fourth volume of the National Climate Assessment, an update of the last report released in 2014. It’s the culmination of work by 13 federal agencies mandated by Congress to assess climate science and climate change impacts every four years.

The final report isn’t significantly different from this summer’s draft. But it underscores the critical challenges the United States faces due to increasing global temperatures.

Global annual temperatures have increased by 1.8 degrees Fahrenheit over the past 115 years, according to the report, and the current period is “now the warmest in the history of modern civilization.”

As NM Political Report reported earlier this year, the assessment’s authors point out that human activities—such as the burning of fossil fuels—are the dominant cause of this warming. “For the warming over the last century,” the assessment’s author’s write, “there is no convincing alternative explanation supported by the extent of the observational evidence.”

The impacts of warming are widespread across the Earth: melting glaciers, diminished snow cover and sea ice and ocean acidification. Already, seas have risen by seven to eight inches since 1900—and almost half of that has happened since 1993. The Arctic is warming at a rate about twice as fast as the global average, they write. If that continues, Septembers will be “nearly ice-free” in the Arctic Ocean within the next two decades.

“Understanding the full scope of human impacts on climate requires a global focus because of the interconnected nature of the climate system,” according to the authors. “For example, the climate of the Arctic and the climate of the continental United States are connected through atmospheric circulation patterns.”

“And I will keep working to ensure scientific integrity going forward,” Udall said. “While the Trump administration debates and denies climate change, we’re losing valuable time that we should be spending trying to reduce greenhouse gas pollution.”

Earlier spring snowmelt and reduced snowpack are already affecting water resources in the West, he said, “and unless we make profound changes to water management, chronic, long-duration hydrological drought is increasingly possible before the end of this century.”

The science on warming and its impacts is definitive and there is no debate, he said. “The longer we deny climate change the worse off we will be, especially our children and future generations,” he said. “Global action must be taken to prevent climate change from getting worse, or we will pay the consequences—in our communities, our food supply, global health, and national security. In the United States, the West is already in the bull’s eye, and we need to be taking urgent action.”

Meanwhile, carbon dioxide levels in the Earth’s atmosphere continue rising. In October, NASA reported dramatic spikes in carbon that were recorded in 2015 and 2016. Given continued emissions of carbon dioxide and other greenhouse gases, warming will continue to accelerate globally, and in New Mexico.

According to NASA, carbon dioxide levels in the atmosphere are higher than they have been at any time in the past 400,000 years. During ice ages, levels were about 200 parts per million (ppm), and during the warmer interglacial periods, they were about 280 ppm. In 2013, they rose above 400 ppm for the first time in recorded history.

The biggest foreseen impact on New Mexico will be on snowpack, Gutzler said.

“We will still have wet decades,” he said. But they won’t boost reservoir levels or recharge groundwater as efficiently. Soils will be dry. Water demands will be high, from cities, farmers and vegetation. And reservoirs and ecosystems alike won’t be able to catch up on water.

“We don’t have a choice whether to adapt to warming,” Gutzler said. It’s happening—and it’s going to continue happening. New Mexicans can choose, however, to reduce emissions.

“If we want to, we can choose a lower emission rate and a ‘softer path’ to warming,” he said. “We can think globally and long-term. We can join other countries to reduce greenhouse gas emissions.”

To read all of NM Political Report‘s stories on climate change: https://nmpoliticalreport.com/tag/climate-change/

Correction: The author introduced a typo into the original sentence on sea level rise, which has been recorded since 1900.