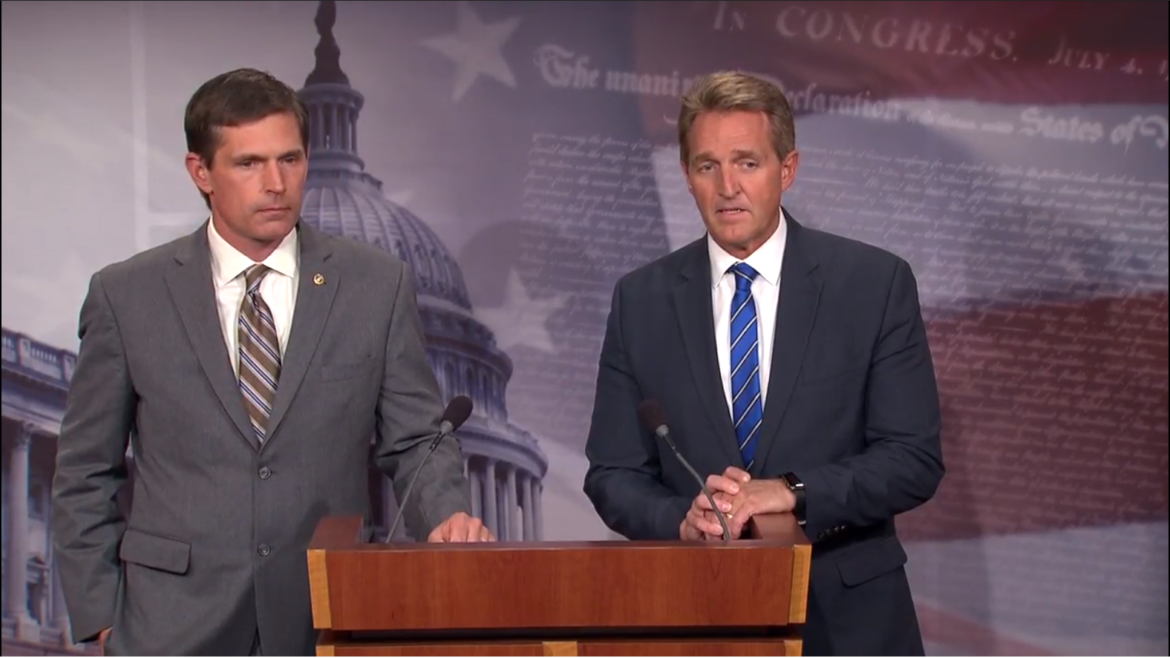 One of New Mexico’s U.S. Senators introduced legislation that would make sure those convicted of domestic violence offenses in the military cannot own a firearm.

U.S. Sen. Martin Heinrich, a Democrat, worked with U.S. Sen. Jeff Flake of Arizona, a Republican, on sponsoring the legislation. Both men described the bill as one that can pass with bipartisan support and will have a real-world impact.

They introduced the bill in response to the fact that the man who killed over two dozen men, women and children in a Sutherland Springs, Texas church was convicted of assault against his wife and step-child and discharged for bad conduct while a member of the U.S. Air Force. The alleged murderer was still able to buy guns despite a federal ban preventing those convicted of domestic violence from buying firearms.

But there is no specification in the Uniform Code of Military Justice for domestic assault, Flake said, only for assault. Because of this, the military has not been reporting convictions of what would be classified as domestic assault in non-military courts to a federal database of domestic abusers meant to prevent them from owning weapons.

The Senate legislation would require the U.S. Department of Defense to determine if a conviction for assault in military court would qualify as domestic violence in state court. If it does, the military would be required to enter those convictions onto the National Instant Criminal Background Check (NICS) database used for gun background checks.

“For those who say this is currently the law, we don’t need to change anything or clarify, since the modern record-keeping for NICS began in 2007, there has only been one instance, just one instance, of military reporting a charge like this to the database,” Flake said.

Those numbers are through 2016.

The Lautenberg Amendment, which became law in 1996, says that those convicted of domestic violence cannot own firearms.

“We have seen from the data that the intent of the original Lautenberg Amendment is not being implemented effectively,” Heinrich said.

The Democrat said this law, which would apply retroactively to those convicted of crimes that would be classified as domestic violence in a state court, would help make sure those like the Sutherland, Texas shooter cannot own firearms.

“As somebody who probably owns a lot more firearms than most of my colleagues on either side of the aisle this is exactly the kind of individual who should have never passed a background check,” Heinrich said.

When asked if this legislation went far enough to address gun violence Heinrich said he would be looking at other legislation, but says he believed this is one place that there could be a bipartisan solution.

“We’re not going to let the perfect be the enemy of the good here,” Heinrich said.

This isn’t the only problem with enforcing the ban, according to The Trace, a non-profit journalism website focused on gun violence.

The Trace reported some local law enforcement agencies also lack systems to submit names to NICS. That means those convicted of domestic assault in these local jurisdictions may also fall through the cracks.

The federal domestic violence ban also lacks any mechanism for actually making sure that people convicted of domestic violence relinquish their weapons. New Mexico is one of 41 states, according to a report by the gun-control advocacy group Everytown for Gun Safety, that does not have a process for collecting guns owned by domestic abusers at the time of their conviction.

New Mexico tried to address the problem of domestic abusers still having weapons.

Earlier this year, the New Mexico Legislature passed a bill that would have stopped those with an injunctive order against them, such as a restraining order, from owning weapons. A judge can order injunctive orders with a lower burden of proof than a criminal conviction.

“Our judges already have the power to prohibit individuals that are subject to a civil restraining order from possessing a firearm—whenever they feel that it is warranted—and I would encourage them to exercise this power whenever the facts and circumstances before them require it,” Martinez wrote in her veto message.

The bill’s sponsor, Sen. Joseph Cervantes, told NM Political Report he didn’t believe this was a case where judicial discretion was a good idea.

“I know that judges will sometimes impose sentencing only because they’re compelled,” the Las Cruces Democrat said.

He said his bill also would have asked “for the residents of a household to identify firearms and for the judge to compel some judicial action to ensure those firearms don’t make a bad situation worse.”

Cervantes’ legislation also would have applied to a wider range of offenses than the federal ban, including those against any “household member.”

Someone who abuses a partner who they do not live with or have a child with would not be subject to the ban. Neither would those convicted of misdemeanor stalking crimes.