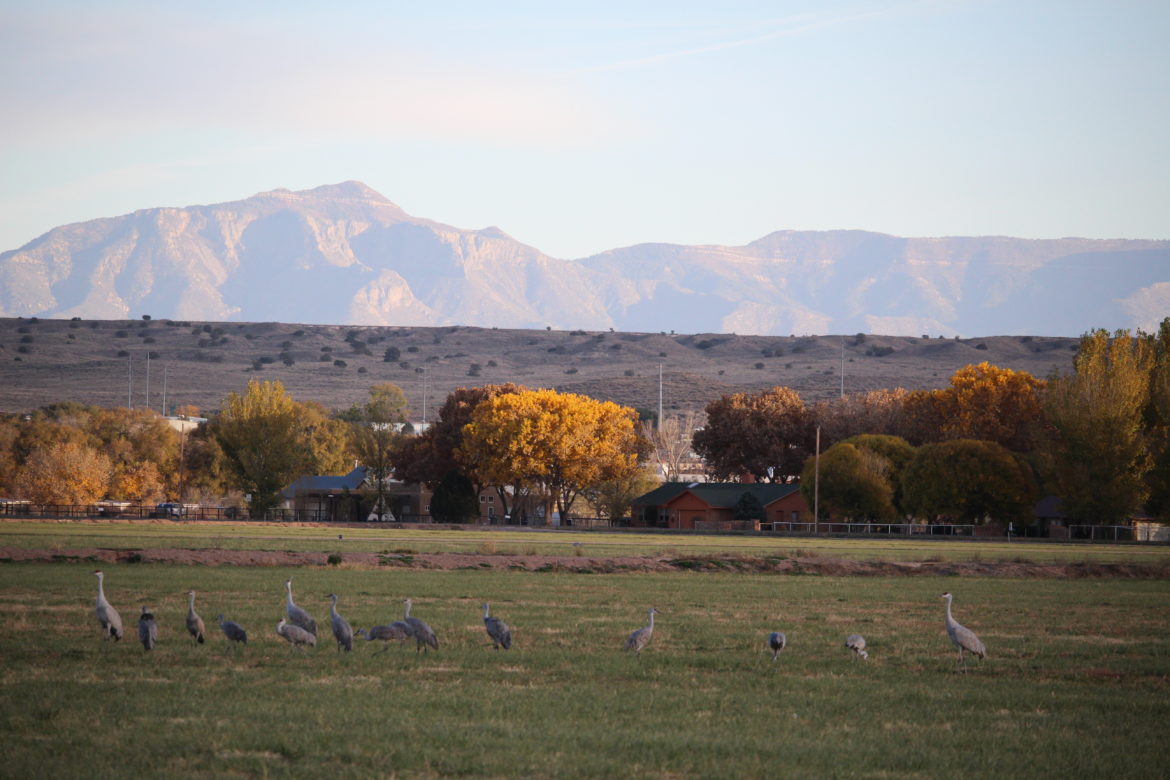 From downtown Albuquerque, it’s a straight shot south down Second Street to Valle de Oro National Wildlife Refuge. Along the way, drivers will pass railyards and baseball fields, salvage yards and irrigated fields. Jets taking off from the Sunport rumble low and loud, and plumes of contamination, from military and industrial activities, lurk in the waters belowground.

Pulling into the parking lot at Valle de Oro, near the southern edge of the Mountain View Neighborhood, first-time visitors might pause and wonder why they’re there, exactly. Squint, and they’ll see cottonwoods of the bosque in the distance, and an old dairy barn painted with images of dancers.

Valle de Oro is different from the traditional refuges that protect established wildlife habitat. For more than 80 years, people worked this land. But when Price’s Dairy came up for sale in 2012, the federal government, in partnership with the community, local governments and nonprofits, jumped at the chance to buy one of the last and largest stretches of undeveloped land left near the Rio Grande in Albuquerque.

Before the refuge existed, or even had a name, it had a friends group, says Aryn LaBrake, executive director of the Friends of Valle de Oro National Wildlife Refuge. When neighbors found out the dairy was going up for sale, they came together and said they wanted it maintained as a green space. Today, the group acts as a community liaison, according to LaBrake.

“We take on a lot of volunteers to help support the work at the refuge, but beyond that, we’re also here to make sure the community is heard during the decision-making processes,” she says, whether those decisions are related to programs, construction of buildings like the visitors’ center or the property’s restoration.

Looking across the fields, where alfalfa still creeps up green even in November, refuge manager Jennifer Owen-White says they’re creating habitat here that will attract a diversity of wildlife—and a diverse urban audience.

Valle de Oro is the first urban refuge in the southwestern United States—and the first such refuge being built under the U.S. Fish and Wildlife Services’ urban standards of excellence. That’s also unique about this refuge: neighbors and visitors are a part of the refuge’s transformation.

“Normally, you’d find that a place like this wouldn’t be open to the public until everything was built and then we’d say, ‘We made this, and we hope you like it,’” Owen-White says. “We said, ‘Come out here and see it and be part of it—watch it grow and give us your ideas.’”

For too long, people living in the South Valley haven’t had a say in what happens near their homes—which is why people face a barrage of environmental injustices. There are Superfund sites, transloading facilities and the wastewater treatment plant.

Valle de Oro is also the first refuge in the United States to have a site-specific environmental and economic justice strategic plan. It guides how the federal government works with the community, and incorporates the neighborhood’s ideas into its design.

In the coming years, the refuge and its partners will build a new visitor center and boardwalk trails that overlook wetlands. They’ll also restore habitat across the refuge, replacing the monoculture fields here today with plants that would have grown here in the past, and will be resilient in the future.

The habitat along the Rio Grande will include cottonwoods and willows, while some areas will feature upland species like four-wing saltbush and chamisa. They’re also constructing a salt-grass meadow that will be part of a stormwater drainage project for the neighborhood.

During heavy or prolonged rains, parts of Mountain View flood because the area lacks ditches and storm drains. In partnership with the Albuquerque Metropolitan Arroyo Flood Control Authority, AMAFCA, the refuge will redirect floodwaters from the neighborhood, through the refuge, and into the bosque.

Instead of building a concrete ditch that sends the stormwater, contaminated with runoff from the city, into the river the drainage project will be a naturally vegetated swale, White-Owen explains.

“We really owe a lot to the people in our neighborhood and we have a close relationship with them,” Owen-White says. “Especially as an urban refuge, we have a great opportunity to be an asset to our community, and there are some things our neighborhood needs that we can provide.”

That’s something other public lands managers can learn, too.

A coyote blends into the bosque this spring at Valle de Oro .

“Our neighbors are just really incredible partners and they’re essential to the success of this refuge,” she says. “We’re trying to model that for other public lands—that the people are the key to your success, and your long-term sustainability.”

Tucked into the southwestern corner of the fields, the refuge’s outdoor classroom is far enough from the Rio Grande that the distinctive croaks and coos of sandhill cranes along the river seem low and quiet on a warm November morning. The cranes returned to the Middle Rio Grande about a month earlier, and the loud, long-legged birds will stay through the winter and into February. Earlier, a raucous murder of crows wheeled overhead. As the refuge’s education specialist, Teresa Skiba, talks a white-crowned sparrow lets loose its distinctive trill.

Skiba’s mother and grandmother are from the South Valley, and she grew up here, too. She feels solidarity with the elementary, middle and high school kids who come to the refuge. And she wants to provide them opportunities to be outside, see the world around them, and contextualize the things they’re learning.

“A lot of the kids we’ve worked with have never visited the bosque or gone to the river,” she says. “It’s nice to be able to provide that safe space to explore.”

Students from throughout Albuquerque come to the refuge to learn about the environment and help collect data. They even helped build the outdoor classroom. Visiting the refuge allows students the chance to learn about science through real-life experiences. “I’ve had kids say, ‘I don’t want to leave,’” Skiba says. “They just feel a sense of place and feel overwhelmed by the beauty that’s around them.”

To watch last Friday’s episode of Our Land New Mexico that aired on New Mexico PBS about Valle de Oro National Wildlife Refuge, visit here. You can also learn more about the series at the New Mexico In Focus website.