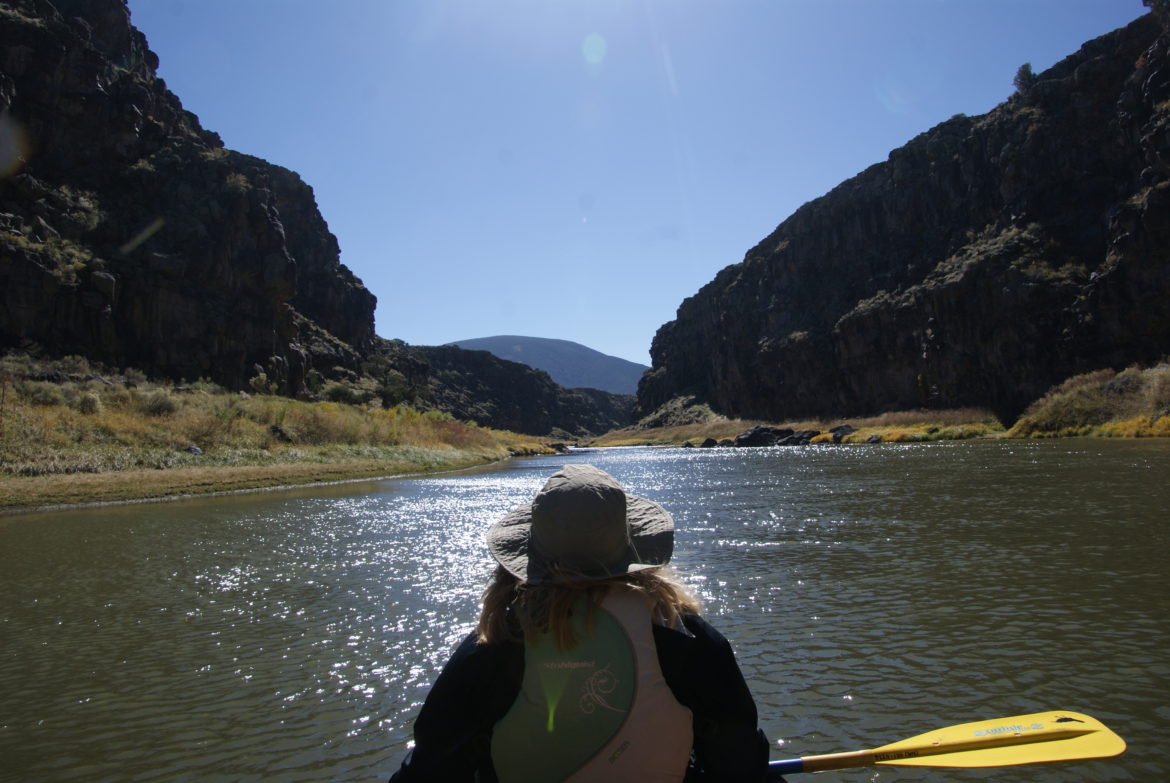 There are borders to be crossed as well as lines to leave alone. The Rio Grande forms a 1,225 mile boundary between Mexico and the United State for its final stretch to the Gulf of Mexico. But long before it attracts attention as an international border, the Rio Grande drops out of Colorado’s high country, wanders across a broad plain and quietly enters New Mexico and a basalt lined canyon. It is a lonesome river stretch as it pours into the recently created Rio Grande del Norte National Monument; a landscape worthy of its protected status.

Therefore, seeking solitude, on an October morning my wife and I plopped our canoe into the Rio Grande 18 miles north of New Mexico. We headed downstream towards the national monument President Obama created in a March 2013. We battled headwinds, just as the monument’s supporters are doing now with the Trump administration as it seeks to remove conservation protections from the monument.

Passing through range land, four border collies swam out into the river barking at us for having the audacity to paddle past their charges of a goat herd and a handful of cattle. Creeping downstream a large mule deer buck stood a few steps from our canoe and stared at us before moving into a willow thicket. Surrendering to the wind we made camp eight miles north of New Mexico.

The monument was not created in a day and it was fine with us if it took several for us to get to it. In fact it took several decades to receive its full protection. The Rio Grande itself and a quarter mile on either side of it, through what is now the monument, gained federal legal standing as one of the inaugural eight rivers protected under the 1968 Wild and Scenic Rivers Act. Broader land protection for the river where it enters New Mexico and extending up onto the rim of the canyon and out across the mesa, volcanic cones, and other landscape elements all came when the Rio Grande del Norte Monument was created in 2013.

The monument’s designation followed a process that included multiple years of Department of Interior planning and opinion gathering. Broad support for national monument designation came from area people including Taos Pueblo, the Taos County government, area chambers of commerce, as well as hunting and fishing organizations. Almost without exception the region’s elected representatives supported the initiative

The area’s rugged beauty is treasured by locals and visitors alike. On our second day of canoeing our challenge shifted from wind to the wild river itself. Low river flow exposed an almost continuous string of barely submerged canoe-ripping rocks and straight-path blocking boulders.

By mid-day we went through a small rapid and an easterly turn to find ourselves in the presence of a river otter and within the boundaries of both New Mexico and the Rio Grande del Norte National Monument. The otter stuck its head well out of the river. It gave us a good looking at and started chirping.

Though river otters continued to be found elsewhere across the continent, a combination of over-trapping, water pollution, and habitat alteration eliminated them from New Mexico by the 1950s. Starting in 2008, their reintroduction was a conservation victory made possible by a cooperative effort of Taos Pueblo, the New Mexico Department of Game and Fish, and conservation groups, such as Amigos Bravos. The monument itself now provides important habitat for the otter success story.

Paddling deeper into the monument we saw peregrine falcon, golden eagle, mule deer, bighorn sheep, elk, and several dozen other species of mammals, reptiles, fish, and birds. On our trip’s third day we came upon a pair of river otters bounding along the bank before they dove into the water. They swam next to us for a quarter mile. We dodged rocks.

To leave the river required climbing several hundred vertical feet on a trail that was more suited to goats than canoe carrying. Once above the river our view shifted to include more of the monument including the volcanic cinder cone, Ute Mountain, for which the section of the river we just ran is named.

The Rio Grande del Norte National Monument’s is managed by the Bureau of Land Management rather than the usual, more protective, managing agency of national monuments, the National Park Service. President Obama’s enabling proclamation explicitly protected Native American access and use of the property, maintained existing grazing rights, protected hunting and fishing opportunities on the land, and preserved traditional community activities such as firewood and pinyon pine nut gathering.

In March of 2017 President Trump issued an executive proclamation directing his Secretary of the Interior, Ryan Zinke, to review 21 large National Monument declarations made by his three immediate predecessors for possible alteration or revocation. The enabling legislation of the 1906 Antiquities Act permits the President to provide National Monument designation to protect “…features of historic landmarks … and other objects of historic or scientific interest that are situated upon the lands owned or controlled by the Government of the United States.” The Trump administration asserts that his predecessors failed to properly consult local neighbors of the designated properties before making their declarations. Even a cursory read of the record shows otherwise. But a farcical review commenced.

Pertaining to the Rio Grande del Norte review, Secretary Zinke carried out a “fact finding and public input” process that was but a fraction of the time and effort spent in the original consideration that preceded President Obama’s proclamation. Better than 96% of the thousands of comments submitted, advocated leaving the Rio Grande Del Norte National Monument as it is. In September 2017 a leaked version of Secretary Zincke’s report to the White House published in the “Washington Post” and elsewhere proposed significant changes to some monuments and the opening of Rio Grande del Norte National Monument to mining and commercial logging. It also called for hunting and fishing opportunities and protection of Native American access, activities at Rio Grande del Norte National Monument that are already protected in the original presidential proclamation.

For over 35 years I have hiked, canoed, and explored the lands of what is now Rio Grande del Norte National Monument. Decades before it was a monument, it is where I learned to ride a motorcycle. My New Mexico driver’s license photo from that era showed bugs on my face I got riding across those mesas the morning I went to get my motorcycle endorsement. On the recent trip, going in a canoe down the Rio Grande, my face did not pick up splattered bugs. Instead, I gathered live wildlife sightings by the dozens and reaffirmed for myself that President Obama’s National Monument designation properly captured and protected, “…features of historic landmarks…and other objects of historic or scientific interest.”

As President Trump considers Secretary Zinke’s recommendations for the Rio Grande del Norte National Monument my advice is simple. Fully protect its boundaries and contents. Leave it be.