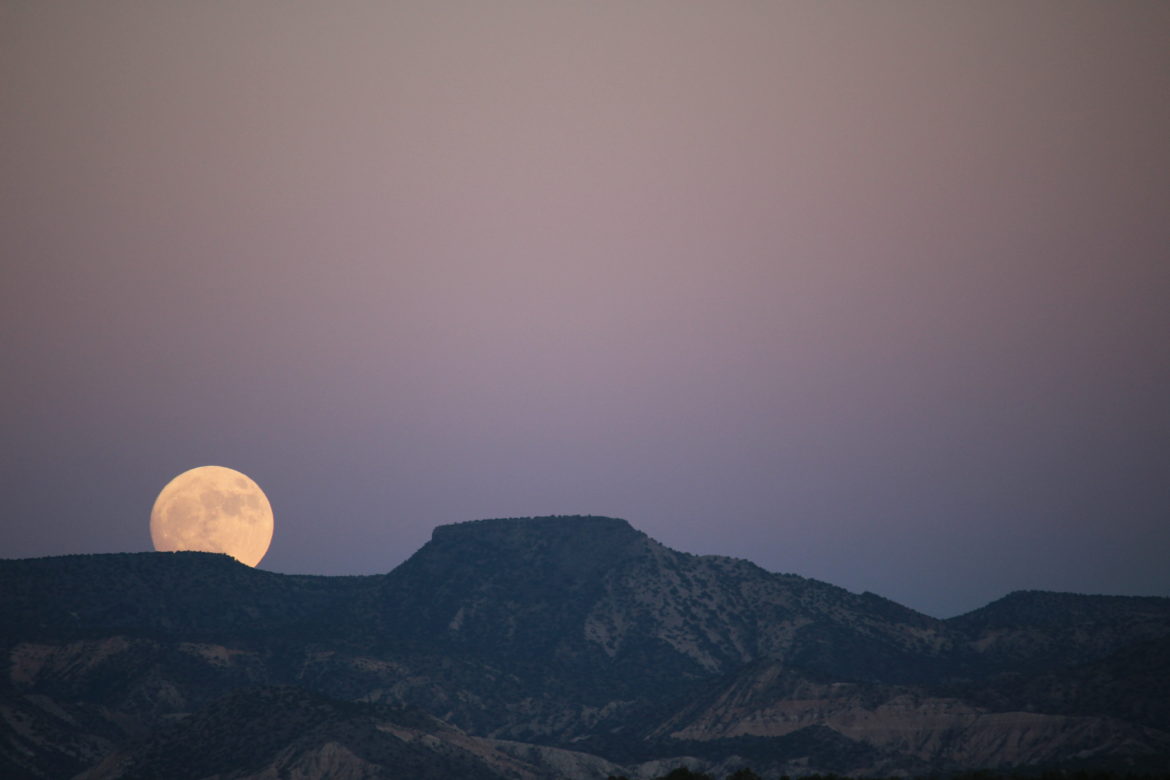 On Black Friday, you can line up outside a big box store hours before sunrise, shove your way through the crowd and perhaps, victoriously snap a selfie with the discounted flat screen television you scored.

But if you’re lucky enough to have the day off on Friday and want to disentangle from the stress of bills, work, school, social media and politics, you have other options. There’s a movement afoot to wrest the day after Thanksgiving from the clutches of consumerism. And New Mexico is the perfect place to join the revolution.

Even though the #OptOutside campaign itself emerged from the retail world—REI decided not to open its stores on the post-Thanksgiving retail day and instead give employees the day off—it’s entirely possible to have fun outside without buying any recreational equipment at all.

Within New Mexico there are more than 20 national parks, monuments and trails. Plus, the state has two new national monuments, the Organ Mountains-Desert Peaks and Rio Grande del Norte national monuments, and also the Valles Caldera National Preserve. There are five national forests: the Carson, Cibola, Gila, Lincoln and Santa Fe, and millions of acres of designated wilderness all across the state. These wilderness areas range from the remote Gila Wilderness, which was protected in 1924—40 years before Congress even passed the Wilderness Act—to the Sandia Mountain Wilderness, accessible from trails at the edge of Albuquerque. There’s also a new wilderness area for people to explore: Even though Congress designated the Sabinoso Wilderness in 2009, it took a just-completed land deal to allow access to its canyons and mesas. (The area is managed by the U.S. Bureau of Land Management, which has directions on its website.)

The U.S. Fish and Wildlife Service manages eight national wildlife refuges in New Mexico, including the newest refuge, Valle de Oro in Albuquerque’s South Valley, and the U.S. Bureau of Land Management has great places to visit, too. (Three of my favorites include Ojito Wilderness Area, Bisti/De-Na-Zin Wilderness Area, and Kasha-Katuwe Tent Rocks National Monument, which is co-managed by the Pueblo of Cochiti.)

And while most people associate places managed by the State Land Office with energy development or livestock grazing, there are also ten recreational areas. (You’ll need a permit, which costs $35 and lasts a year; here’s a link to the application.)

The state of New Mexico is getting in on the #OptOutside action, too. For the second Black Friday in a row, the Energy, Minerals and Natural Resources Department is waiving admission for the day at New Mexico’s 34 state parks.

“We’re just trying to encourage people to go outside and connect to nature after Thanksgiving,” Tafoya says, adding that most state parks departments across the country are participating, too.

And those who do hit the state parks on Friday, Tafoya says, should tag their pictures with #NMTrueParksFriday on social media.

I also asked a few folks about their favorite hikes.

“My favorite places to go are high places with spectacular views,” says Kristina Fisher, president of the Albuquerque Wildlife Federation. “New Mexico has no shortage of these destinations.” She shared four places close to Santa Fe, giving a nod to the Sierra Club’s guide to day hikes in Santa Fe. Fisher’s favorite spots this time of year include Buckman Mesa, Tetilla Peak, La Cieneguilla Petroglyph Site, and the trails at White Rock Canyon (Rim Trail and Red Dot/Blue Dot Trail, which all begin at White Rock’s Overlook Park).

Mark Allison, executive director of the New Mexico Wilderness Alliance jokes there’s “no way” he’s sharing his favorite hiking spots. But he still has a few ideas for Friday. “I’d say soaking in a hot spring in the Jemez,” he says. “One of the ones you have to really hike or cross country ski to so that if you are lucky you have it all to yourself.” He also suggests taking in the red rock walls of the Chama River—by kayak or on foot, hiking from Monastery Road.

“I have family coming into town over Thanksgiving and am sure we will be playing in the Sandia Mountain Wilderness at some point while they are here,” he says. “We are so fortunate in New Mexico to have public lands so close to us, no matter where we live.”

Liliana Castillo with Conservation Voters New Mexico is also planning to be outside on Black Friday, and says she’s excited that more stores are choosing to stay closed that day. “I prefer hiking to shopping on most days,” she says. “My go-tos are Diablo Canyon and Tesuque Creek, or I’ll plan to try a new hike that day with my leftover turkey sandwiches.”

Particularly in the past year, the words “public lands” have become increasingly politicized. They’re easy words to stake our political ideologies onto, but let me just simplify things: Public lands are places open to anyone, sometimes for free, sometimes for a pretty small fee. Depending on where you are, you can hike, hunt (if you have a license and draw a tag), ride a bike, birdwatch, gather firewood or find your Christmas tree. You can also lie in the dirt and stare at the sky, let your kids run around in the forest or the desert, look for birds or fossils, geocache, have the best date ever, find cool rocks and check out archaeological sites.

You don’t have to make a statement about public lands; you don’t even have to be all official and #OptOutside. Just go for a walk. If that’s not an option, places like Bosque del Apache National Wildlife Refuge have driving loops. If you can’t leave town, the City of Albuquerque and Bernalillo County Open Space areas are amazing. Santa Fe County has trails and so does the City of Las Cruces. You can even just stroll around your neighborhood. Look for bird nests now that the leaves have dropped or count the number of different bird species you see. (Look up for the ones that are migrating now, too.)

We also asked our readers to share their favorite spots and best ideas for spending the day outside on Friday, as well as to share the best books to bring along on a foray outdoors. Here’s what some of them had to say. And if you go someplace this weekend, snap a picture and tag @LauraPaskus with #OptOutside or #NMTrueParksFriday to share your adventure with us.

I have littles, so we like the Boca Negra trail at Petroglyph National Monument. It’s a short hike, but a fun climb. Manageable for the kids & big payoff in terms of view, petroglyphs — and, in warm weather, lizards! Plus, what kid doesn’t like scrambling up a rocky trail?

Tres Ritos and Penasco are my favorite places to hike and camp in NM. I cannot leave out Santa Barbara!

Forecast calls for 70s (!!!) at my moms place in CO for thanksgiving. Cripes. I remember when it used to SNOW on thanksgiving. Looks like hiking Friday for us!

Don’t go shopping on Buy Nothing Day this Friday. Instead go see art in Santa Fe or hike by the Rio Grande and count the porcupines and bald eagles. #StopShopping https://t.co/AEZUZZ5yOT

A bike ride around industrial neighborhoods (a new hobby, and way of seeing my city from the inside out).

Just one?! These are my favorites any time of year, but especially during fall elk hunts. pic.twitter.com/AKU92ealle

For hiking and wandering around NM, I like to carry one of these. pic.twitter.com/nnHBBrXJC8

Mountain biking in the east mountains. No better way to spend a 70F day in Nov