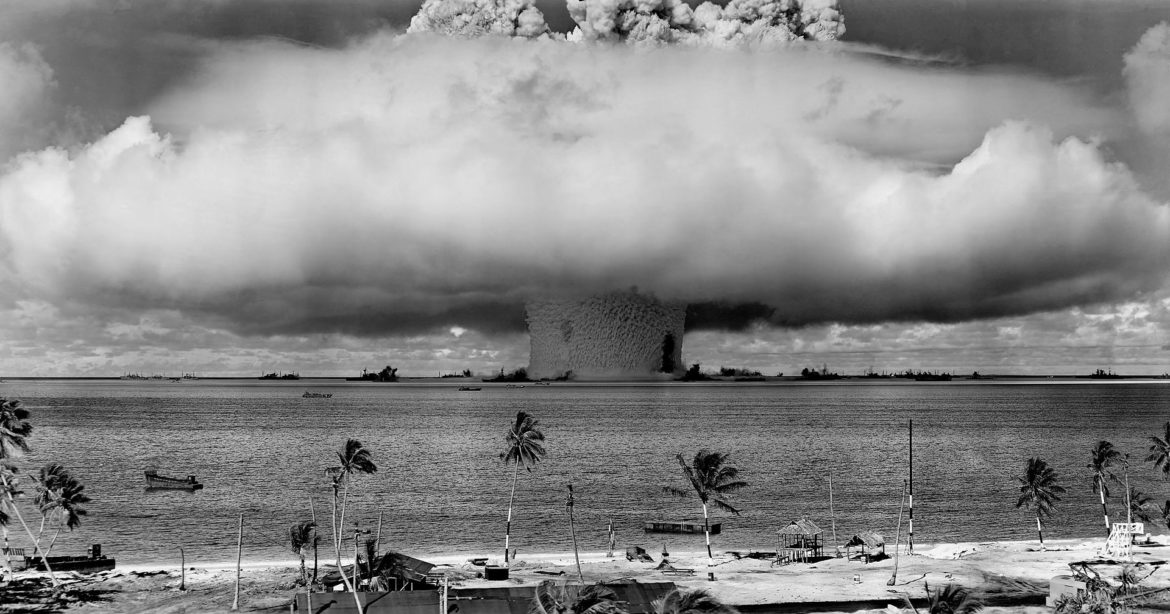 A mushroom-shaped cloud from a nuclear explosion on July 25, 1946. Photo taken from Bikini Island.

Last week, U.S. Sen. Bob Corker, R-Tennessee, called the Senate Foreign Relations Committee together to investigate the president’s ability to command the use of nuclear weapons. It is heartening to see leaders on both sides of the aisle recognize the need to reevaluate this dangerous and undemocratic policy. While President Donald Trump may extol the leadership qualities of dictators and despots around the globe, his job is to function within the confines of the democracy we live in, and he must not be given unchecked power to attack any nation with the catastrophically destructive force of nuclear weaponry.

For us New Mexicans, the danger of nuclear weapons hits close to home. In 1945, in a desert just a short drive from where I am writing this in Albuquerque, the U.S. government detonated its first atomic bomb. One month later, it dropped another on Nagasaki, killing hundreds of thousands of Japanese civilians. We bore witness to the first deployment of these weapons and 72 years later, our friends, family and neighbors are still affected.

The subsequent passing of the Atomic Energy Act of 1946 gave sole authority to the president to order nuclear strikes. The determination to launch atomic weapons was deemed “above and beyond a regular military tactic;” too grave a decision to entrust to the military. The thinking was that giving this power to the executive would serve as a counter-balance to reckless decision-making on the part of the Pentagon. What the act did not do, however, was take into consideration the potential of erratic, ego-driven decision-making coming directly out of the Oval Office. Leaving this destructive power in the hands of any one person, least of all our current Tweeter-in-Chief, is irresponsible and must be addressed to keep our nation, and the world, safe.

The president has, of his own accord, forced this issue onto the agenda with his posturing and blustering threats toward North Korea and other nations. Even so, it’s a policy error that should have been addressed years ago. The SFRC last examined the president’s ability to launch a nuclear first strike in 1976. It is high time the policy be reshaped to more closely follow the spirit of the Constitution, and balance the power given to the executive with legislative functions that keep those powers in check.

The SFRC hearings give Congress an opportunity to examine a range of options that move us away from today’s dangerous, quick launch posture and increase transparency about the enormous consequences of nuclear use, such as: requiring that a decision to use nuclear weapons be made by more than one person; prohibiting the president from launching a first-use nuclear strike; or declaring that the US will not be the first to use nuclear weapons. Straightforward solutions that should be supported by level heads from any party.

We may never live in a world completely free of nuclear threats, but measures such as those in discussion would significantly mitigate our role in going down a path of devastation from which there would be no return. We as a nation must always stand at the ready to defend the country, but the time has come to revisit this dangerous imbalance of power and introduce procedures that bring stability to one of if not the most grave decisions a country can make. Every day, I try my hardest to create a better future for New Mexicans. That is why I am calling on New Mexico U.S. Senators Tom Udall and Martin Heinrich, and for all of us, to continue supporting efforts to re-examine the absolute power we give the president over nuclear weapons.