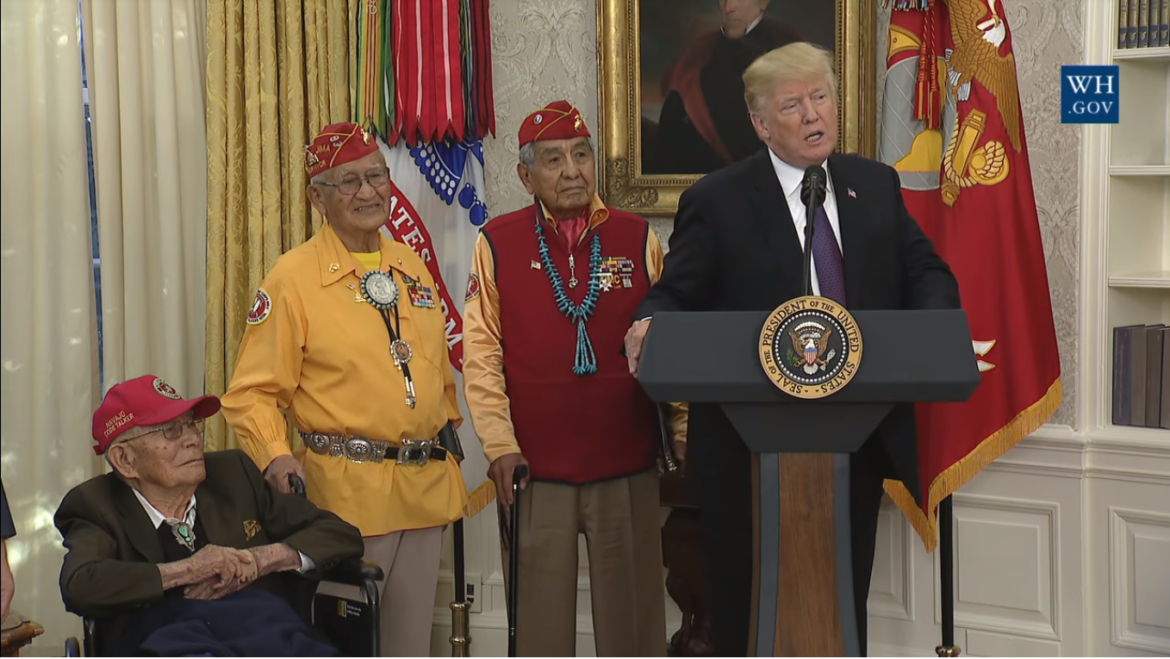 President Donald Trump made a number of remarks during an event honoring Navajo Code Talkers that have drawn condemnation.

Trump met with three Navajo Code Talkers in the Oval Office, in front of a portrait of Andrew Jackson. Jackson was the president responsible for the Trail of Tears, a brutal removal of Native Americans from lands in the South. In all, thousands of children, women and men died and tens-of-thousands were displaced to make way for more slave plantations.

There, he insulted a U.S. Senator calling her “Pocahontas.”

At the event, three Navajo Code Talkers attended the White House event and asked the federal government to create a museum dedicated to the role Code Talkers undertook during World War II. Fleming Begaye, Thomas Begay and Peter MacDonald represented the Code Talkers, as three of the 13 living members. MacDonald is the president of the group representing the living members.

“In this day and age, all tribal nations still battle insensitive references to our people,” Navajo Nation President Russell Begaye said in a statement afterward. “The prejudice that Native American people face is an unfortunate historical legacy.”

U.S. Sen. Tom Udall, the vice chairman of the Senate Indian Affairs Committee, slammed Trump and said that “the president should study his history.”

In reference to the invocation of Pocahontas, Udall called it “racist.”

“This moment in history won’t overshadow the contribution the Code Talkers made and continue to make to our nation,” Udall said in a statement. “But racist comments like that are never acceptable, and are in especially poor taste against the backdrop of Andrew Jackson’s portrait.”

The Navajo Code Talkers were instrumental in World War II and used their native languages to transmit information. Enemy nations were unable to crack the code.

State Sen. John Pinto, D-Gallup, has long sought, unsuccessfully, funding for such a museum. Pinto joined the U.S. Marines during World War II and trained as a Code Talker, but the war ended before he was deployed.

In 2016, a joint memorial passed the state House and Senate unanimously, asking Congress to fund the planning and construction of a Navajo Code Talker Museum and Veterans’ Center.

When the three asked Trump on Monday to help build a museum, Trump said, “You deserve it.”

Trump also used the ceremony as an opportunity to attack Sen. Elizabeth Warren, a Democrat from Massachusetts, using an ethnic slur.

“You’re very, very special people. You were here long before any of us were here. Although we have a representative in Congress who they say was here a long time ago. They call her Pocahontas. But you know what. I like you. Because you are special,” Trump said, in reference to Warren, who he frequently calls “Pocahontas.”

Warren responded, saying, “It is deeply unfortunate that the President of the United States cannot even make it through a ceremony honoring these heroes without having to throw out a racial slur.”

Warren says she is part Cherokee and Delaware Indian, citing family lore, but no documentation.

White House Press Secretary Sarah Huckabee Sanders defended the remarks and said it was not a racial slur to call Warren “Pocahontas.”

Rep. Tom Cole, R-Oklahoma, an enrolled member of the Chickasaw Nation, called the use of Pocahontas’ name in this way “pejorative” and that its use “offends a much larger group of people.”

Other Native Americans have also said they consider the name’s use in such a way a slur.

“Today’s racially derogatory remarks by President Trump regarding Senator Warren are mean-spirited, insulting and impossible to interpret as anything other than a slur against an entire people,” Luján said. “They are beneath the dignity of the office that Mr. Trump holds and are especially insensitive given the setting in which they were delivered, one designed to honor the Navajo Code Talkers’ role in World War II.”

“The days when the President of the United States was held as a moral authority around the world were over 11 months ago, but at what should have been a solemn ceremony to honor Native veterans, Donald Trump took low even lower,” Udall said.