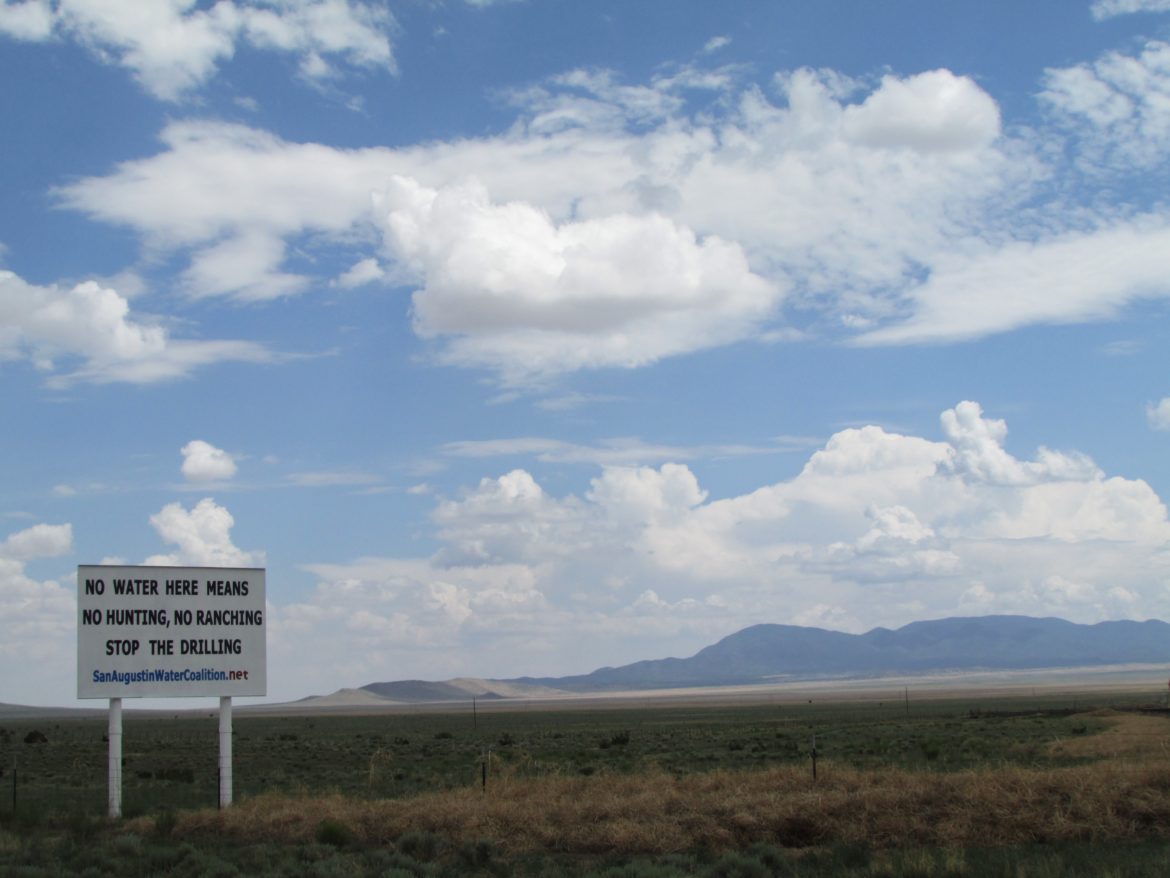 Almost 100 people packed into the Catron County Courthouse in Reserve, N.M. last week for a hearing about plans to pump groundwater from beneath the Plains of San Agustin in southwestern New Mexico.

Augustin* Plains Ranch, LLC wants to pump 54,000 acre-feet of water—more than 17 billion gallons—each year from the aquifer and pipe it to commercial or municipal water customers hundreds of miles away. The state has rejected similar applications from the company twice. Now, a third application is pending before the New Mexico Office of the State Engineer, which administers the state’s water resources.

The final decision will lie with the State Engineer, a position currently held by Tom Blaine, who was appointed by Gov. Susana Martinez three years ago.

Opponents of the project say the application is the same as those previously rejected, and that the company fails to say who will use the water it plans to pull from the area. At the hearing, Chris Lindeen, deputy general counsel at the Office of the State Engineer, ticked off the ways in which the application is complete, and explained that water rights applicants have the right to due process, just like protestants.

But he had more to add.

Under the New Mexico Constitution, water is owned by the public and subject to “prior appropriation.” That is, people or entities with water rights must put that water to “beneficial use.” When considering water rights applications, the state must consider three crucial issues: public welfare, whether the project will impair existing water rights holders and conservation. Speculation, Lindeen explained, can be described different ways, including as monopolizing or hoarding water. And that relates to public welfare. The San Augustin Plains Ranch application, he concluded, is speculative and violates the prior appropriation doctrine. “So, the water rights division recommends that the State Engineer dismiss or deny the application based on speculation,” he said.

“The hearing confirmed that our application is complete as per the law,” he wrote in an emailed statement to NM Political Report. “APR remains the best and only economically viable project currently proposed to alleviate the known water shortages which threaten the future well being of the State.” He added that the company looked forward to “demonstrating that APR can provide sorely needed water to the Rio Grande basin, without any impairment to the area’s residents now and in the future.”

Carol Pittman, an opponent of the project who lives just outside Datil, was surprised to hear Lindeen call the project “speculative” but remained only cautiously optimistic.

“We don’t know what that means: Will the State Engineer go along with it, or is he going to ignore it?’” asked Pittman. “We’re going to proceed as if the application were going to be heard, and we’re going to continue with our plan to hire a hydrologist.” Local residents want to better understand the aquifer and how pumping might affect it and the water rights of the people who already rely on it.

Pittman and others in conservative Catron County, as well as environmental groups, have been fighting against the project for about a decade. “I think a lot of people who live in urban and suburban communities cannot really fathom people who live so far apart as we do—Quemado is 40 miles away, Glenwood, 100 miles away—who have pulled together,” Pittman said. “People do come together. The only ones who left [the coalition fighting the project] are those who died or had to sell their property to move.”

Catron County’s attorney, Pete Domenici, Jr., blasted the company for not adhering to New Mexico state law. Before the state’s hearing examiner, Uday Joshi, Domenici criticized the application on a number of fronts, including for not explaining where the company plans to sell the pumped water.

“On its face, this proposal says, ‘We don’t have to follow New Mexico law,’” he said during the hearing. Catron County covers about 7,000 square miles and hosts only about 3,500 residents. Domenici assured the hearing officer that the remote, sparsely populated county not only expects, but demands, that the rule of law apply to the proceeding.

The pueblos of Sandia, Isleta, and Santa Ana and Sandia also opposed the application. An attorney for the Pueblo of Sandia, Jessica Aberly, said at the hearing that without including an end-user or place of use for the water, the company prevents the pueblos from understanding how the project might affect them. She also noted the company’s plans to build its pipeline across the Pueblo of Isleta. But, Ablerly said, “Isleta can find nothing about the specifics of this pipeline that will go across its property, other than the drawing of a line across the map.”

Fears of a precedent

“The issue here is whether water can be taken out of a rural area, where people are using it, and transported for use in areas like Socorro, Belen, Los Lunas, Albuquerque, or Rio Rancho, which is where the company proposes to run its pipeline,” said Douglas Meiklejohn, executive director of the New Mexico Environmental Law Center, which represents about 80 individuals, as well as some homeowners associations and the Gila Conservation Coalition. “There seems to be a view that rural areas of the state or agricultural uses of water can be sacrificed for municipal and industrial uses of water.”

That’s not unique to the San Augustin proposal, he said.

“The prevailing view of decision makers in a lot of the parts of New Mexico where development is proposed is that somehow or other, development can always get more water,” Meiklejohn said. “That’s the sort of thinking, it seems to me, that’s also behind the Bernalillo County Commission’s approval of the proposed Santolina development.”

Western Albuquerque Land Holdings, created by Barclays Bank and two other investors, wants to develop more than 13,000 acres on Albuquerque’s westside, and needs approval from Bernalillo County for its Santolina Master Plan. Opponents of Santolina have questioned where the water to support such a large new community would come from.

Catron County Commissioner Anita Hand has also been fighting San Augustin Plains Ranch. A decade ago, her brother and father spotted a legal notice in the newspaper announcing the plans to drill 37 wells into the aquifer. They feared the project would deplete their own water supplies and ruin the ranch they have built up over decades.

“Obviously, we’re hoping this will get thrown out and we won’t have to deal with it again,” Hand said of last week’s hearing. “Unfortunately, this is something we’re going to have to deal with until we get some legislation passed.” Such legislation, she explained, would prevent interbasin transfers of water, or prevent water speculation. The upcoming legislative session, however, is a 30-day session, focused mainly on the budget.

“For rural New Mexico, this is one of our biggest concerns, that something like this comes in and destroys our livelihood, our way of life, and any type of future where we can pass on our ranch to our heirs,” she said. “If they can do it here, if they can find another way to justify taking water or natural resources from one area to benefit another area, it sets a precedent.”

To buy or transfer water rights in New Mexico, people or companies must show the water will be put to “beneficial use.” According to its application, the company plans to sell water commercially in seven counties and to state and federal agencies. It also says it will provide water for Magdalena, Socorro, Belen, Los Lunas, Albuquerque and Rio Rancho.

No buyers are identified, but the application includes a 2014 letter from Rio Rancho City Manager Keith Riesberg who wrote that if it’s successful, the city would be “interested in discussing” moving water into the city’s system. Others towns named in the application, like Magdalena and Socorro, are actively fighting the project.

The Albuquerque Bernalillo County Water Utility Authority weighed in publicly ahead of the hearing. In a letter published by the Albuquerque Journal in early December, the authority’s chair, Klarissa Peña, wrote that the authority “wishes to make clear that the agency does not intend—or need—to purchase water from the Augustin Plains Ranch.”

“We understood that the San Augustin pipeline application had somehow identified us [as a buyer of the water], that’s why we wanted to make sure we clarified that,” he said. “The best future for us is to conserve and utilize the resources we already have.”

The authority recently completed a 100-year planning effort, he said, after studying 37 alternatives to supply water for the city’s future.

“Importing water was certainly one of those alternatives,” Stomp said. “But clearly, we didn’t pick San Augustin or anybody else.” Stomp added that in its new plan, the board agreed it will not import water or purchase pre-1907 water rights. Aside from water rights belonging to New Mexico’s pueblos, those are the oldest water rights, typically associated with farms.

For about two decades, the water authority has been transitioning away from groundwater and toward surface water from the Rio Grande and the San Juan-Chama Project. As a result, Stomp said, “Albuquerque is in a pretty good position to meet demands for the next 100 years without looking at other people’s water to support our interests.”

“We want agriculture to continue, and not transferring pre-1907 water rights is a very important step for us,” he said. “And we want to make the same pitch to the San Augustin Project, that we’re not interested.”

The state itself, however, might end up looking for water.

New Mexico is squaring off against the state of Texas and the federal government in the U.S. Supreme Court on Texas v. New Mexico. Texas filed the lawsuit in a dispute over New Mexico’s deliveries of Rio Grande water. The U.S. Bureau of Reclamation also joined the suit, against New Mexico. If New Mexico loses the case, the state could owe a billion dollars or more in damages and also be forced to curtail groundwater pumping by farmers in southern New Mexico. After losing a similar lawsuit against Texas on the Pecos River in the eastern part of the state, New Mexico started a program to pump groundwater into the Pecos during dry times.

The New Mexico Office of the State Engineer did not respond to a request for comment on the hearing or the San Augustin Plains Ranch application.