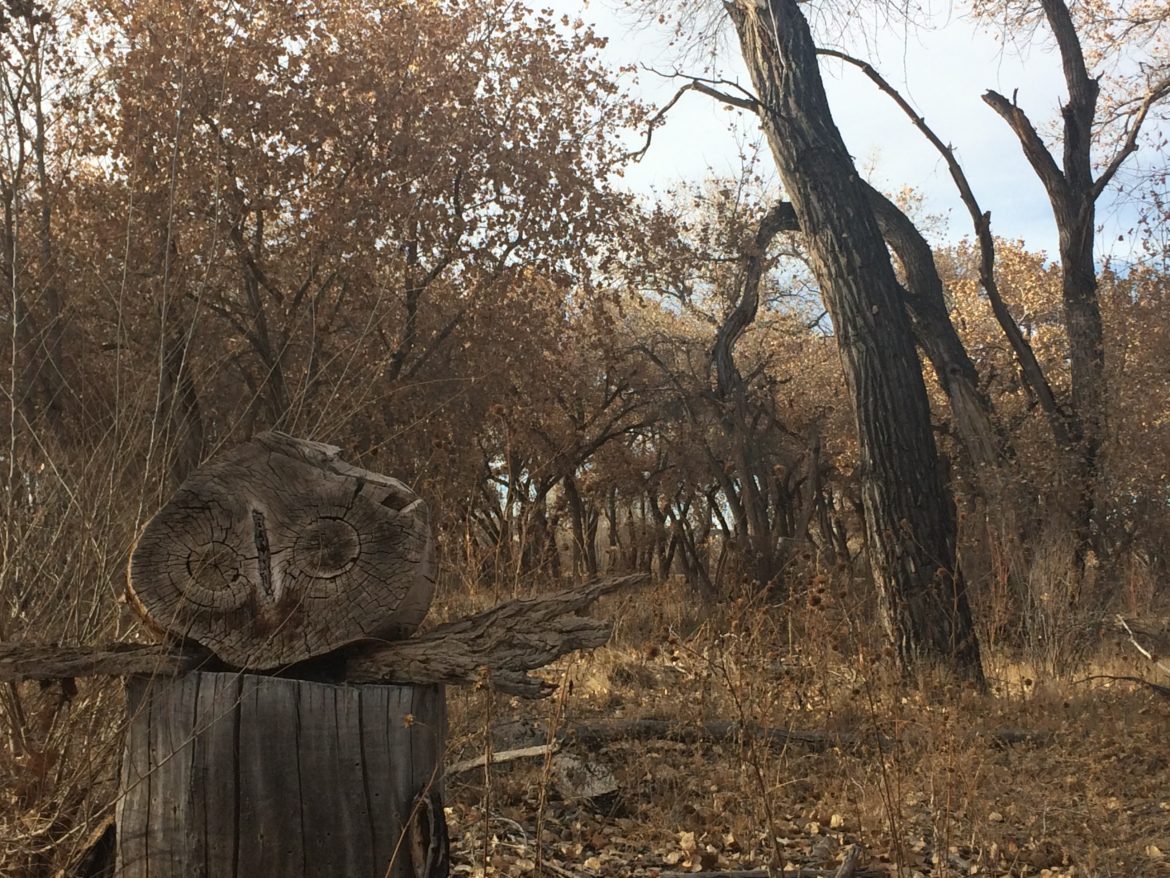 Someone with a chainsaw got imaginative in the bosque.

I hope readers had a restful break from work, school and yes, media, too. To help catch you up on environment news around New Mexico, I have a few links to share.

In December, PNM closed two units at its San Juan Generating Station. Now, the utility wants legislative approval to address how it will recover the money it spent on the plant. According to an AP story by Susan Montoya Bryan:

The utility closed two units at the plant in December as part of an agreement to curb haze-causing pollution in the Four Corners region. It plans to close the remaining units in 2022, citing market conditions as a wave of utilities across the country look to divest their coal resources.

The New Mexico utility expected to recover as much as $560 million over the course of two decades through traditional financing, but an early closure changes the equation. By financing undepreciated capital through the highest rated bonds possible, utility officials say shareholders could still collect nearly 60 percent of that while saving customers $160 million.

Legislators will need Gov. Susana Martinez’s approval to consider the legislation in this year’s 30-day session.

Want to get this in your inbox first?

Reporting for Water Deeply, Jerry Redfern writes that Albuquerque’s water conservation efforts are putting a kink in the Air Force’s already-tardy efforts to clean up millions of gallons of jet fuel that had been leaking for decades into the area’s groundwater. According to the story:

While everyone knew the water table had been rising steadily for years, no one thought it would come up this fast. It means the monitoring wells at the top of the table will need to be replaced about two years earlier than planned. And while there are dozens of other monitoring wells lower in the water table (including the recently submerged wells), there is now a gap in monitoring the size and chemical composition of the top of the fuel plume.

That’s critical because the highest concentrations of ethylene dibromide (EDB) – a highly toxic fuel additive – and other fuel components occur at the top of the water table.

The Santa Fe New Mexican’s Rebecca Moss reports that the New Mexico Court of Appeals reversed an earlier decision by the state to deny a public hearing over a groundwater discharge permit for Los Alamos National Laboratory. According to the story:

Judges Julie Vargas and Jonathan Sutin wrote in the court’s opinion that the commission had “acted arbitrarily and capriciously” in refusing to hold the hearing.

“To deny a public hearing because the public health and environment issues are so grave and immediate weighs in favor of the existence of a substantial public interest,” the judges said. “If anything, this factor supports a conclusion that the public interest in the permit would be heightened, rather than lessened, mandating the hearing under the regulation.”

Right before Christmas, Moss also covered questions concerning BWXT, one of the two federal contractors that the U.S. Department of Energy awarded a $1.4 billion contract for waste cleanup at Los Alamos.

Along with AECOM, BWXT manages both WIPP and Los Alamos. In 2014, mispackaged waste from Los Alamos caused two dangerous incidents at WIPP, which shut down the nuclear waste facility for almost three years.

According to Moss’s Dec. 23 story:

The 2014 incidents in New Mexico might have been the most serious involving BWXT, a longtime federal contractor at several Energy Department sites across the nation, but they weren’t the company’s only problems.

Federal officials have cited the firm with numerous nuclear safety violations — the most recent notice coming just days ago. BWXT also has faced allegations of retaliation against workers and whistleblowers, as well as accusations that it failed to protect workers from contamination in sites from Texas to Idaho. The company’s history raises questions about whether it should be managing cleanup of radioactive waste at Los Alamos.

Lastly, if you have something to say about the U.S. Environmental Protection Agency’s plans to repeal the Clean Power Plan, now’s your chance.

The agency is soliciting public comment on the repeal until Jan. 16. According to the Federal Register notice, commenters must identify Docket ID No. EPA-HQ-OAR-2017-0355. More information on addresses is online here.

EPA is also soliciting comment on a separate, new rule on state guidelines for greenhouse gas emissions from coal-fired power plants. That rule and information on how to comment is online here.