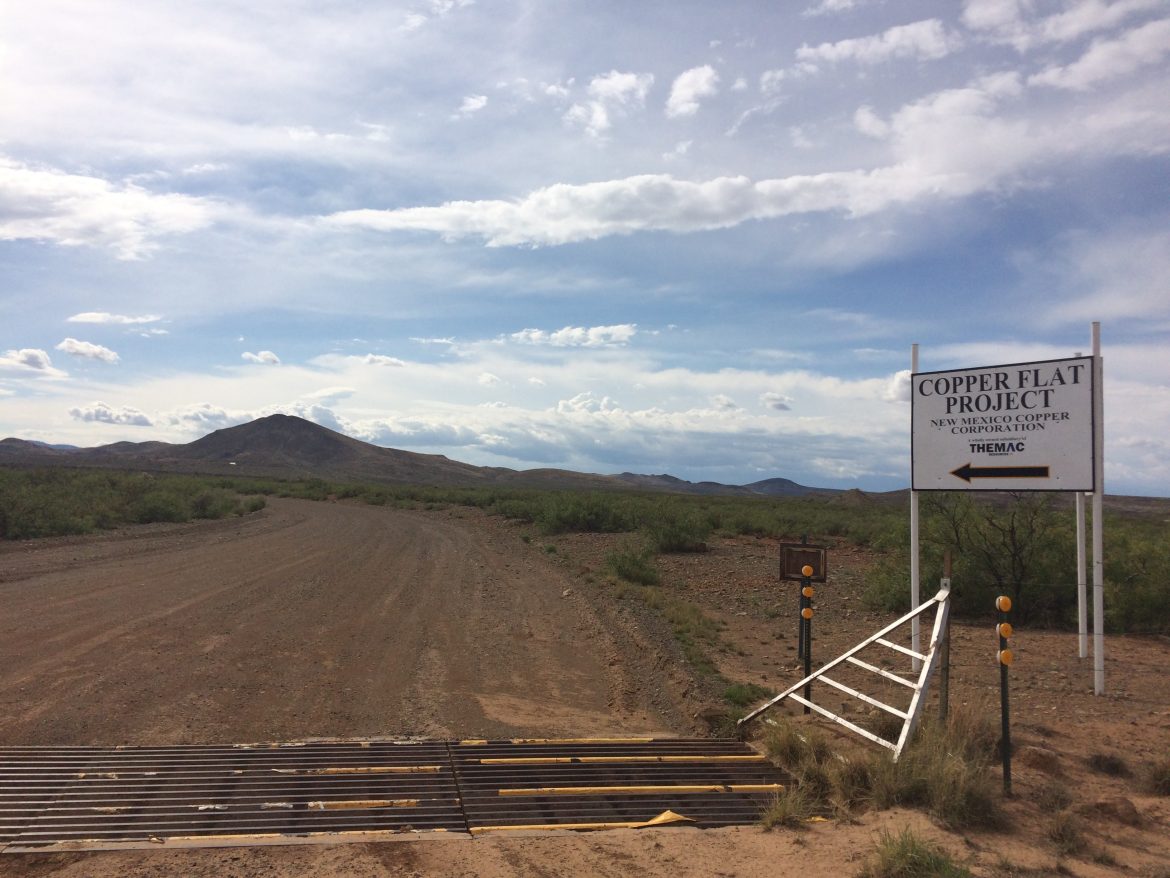 At the end of last year, a state judge chipped away at a company’s plans to reopen a long-abandoned copper mine near Hillsboro. On Dec. 28, New Mexico Third Judicial District Court Judge James J. Wechsler found that most of the water rights claimed by the company are not valid.

New Mexico Copper Corporation (NMCC) planned to use groundwater rights that two men purchased after operations were abandoned at Copper Flat Mine in 1982. William Frost and Harris Gray, along with NMCC and its attorneys, tried to show that those rights were still valid, even though the water hadn’t been put to use over the past four decades—or even when the mine operated.

Under the New Mexico Constitution, water is owned by the public. People or entities must put water to “beneficial use” to maintain their rights, whether to surface water from rivers and streams or water pumped from below the ground.

Wechsler found that the combined water right of Frost, Harris and NMCC is only 861.84 acre feet per year, or about 281 million gallons.

“Certainly, we were disappointed in the outcome, in the judge’s decision, and we’re considering our options now,” said Jeff Smith, chief operating officer of NMCC, a subsidiary of the Canada-based company, THEMAC Resources. Smith said it was premature to discuss other options for obtaining water rights for the mine, but added he is confident the project will move forward.

Each year, the mine will require about 6,000 acre feet of water, Smith said, and is expected to operate for at least 12 years while employing between 275 and 300 people.

“We have done a tremendous amount of work on planning our operation and planning for and analyzing what potential effects may be of the operation and then putting into place elements for environmental protection or groundwater protection, or offsetting effects that our pumping might have,” he said. “We have in place now agreements and plans for other water users in the area that we have discussed with the state to offset any negative effects we might have.”

In its 2017 financial report, the company noted it was working with the New Mexico Office of the State Engineer to “incorporate the use of the Jicarilla water into the terms of the State pumping permit for the mine.”

That refers to the company’s agreement to lease about 3,000 acre-feet of San Juan-Chama water from the Jicarilla Apache Nation in northwestern New Mexico. The tribe has rights to water that is piped in tunnels from the San Juan River and into the Chama River, which flows into the Rio Grande north of Española.

According to that 2015 agreement, that water wouldn’t be used at the mine, but would “offset” water depletions in the Lower Rio Grande. That is, it would replace the water that is lost to the river because of groundwater pumping.

Decades of plans and deals, just months of operations

The Copper Flat Mine operated for just a few months before being closed in July 1982. In 1984, when the state was evaluating how much water was being used in the Lower Rio Grande Basin, the company tallied up its water rights for each of its 18 groundwater wells and the open pit and declared it had rights to 6,462 acre feet of water annually.

But during the mine’s brief life, the company had put less than 900 acre feet of water to beneficial use for mining, milling, reclamation, dust control, wash water and employee use.

A few years later, the owners tried to sell the water rights to the City of Las Cruces, which declined. At that time, Phelps Dodge, which operated the area’s other copper mines near Silver City, also declined to buy its liquidated mine assets. In 1986, Copper Flat Partnership (owned by a Delaware corporation, Quintana and Phibro) and its financial partner, the Canadian Imperial Bank of Commerce, sold all the removable physical assets of the mine to a Papua New Guinea-based mining company. And in 1987, the company notified the state of New Mexico that the mine was permanently closed and would not be restarted.

It was during that time that Frost and Gray, a real estate agent and an accountant, bought the mine’s water rights, 6,462 acre feet, for $20,000. During the 1990s, the mine’s new owners—Gold Express and Alta Gold—paid the two men about $400,000 in total for their consent to use the water rights from previously-drilled groundwater wells.

In 2009, NMCC bought Copper Flats from Hydro Resources Corporation, another new owner, and the following year Frost and Gray entered into an option agreement with the company for the sale of those declared water rights.

But the state pointed out that those water rights hadn’t been put to beneficial use for years, and were no longer valid. And now, Wechsler has agreed.

Hillsboro resident Max Yeh, a local opponent of the mine, said he hopes the judge’s decision will prompt the owners to reconsider reopening Copper Flat. “There are initial, emotional reactions to this kind of thing, locally,” Yeh said. “But it is fairly clear from this decision that in this arid environment, this mine might do great damage.”

Yeh and other Hillsboro residents worry about local impacts from the mine—from the mine itself and its tailings pit, as well as from dust. But the bigger problem, Yeh said, is how groundwater pumping could affect water resources not just in the immediate area, but within the Lower Rio Grande Basin.

And Yeh likely isn’t the only one worried about possible impacts to the Lower Rio Grande Basin.

Texas sued New Mexico and Colorado over water issues in the Lower Rio Grande, alleging that by allowing farmers in the southern part of the state to pump groundwater, New Mexico violated the Rio Grande Compact and didn’t send enough water downstream. The U.S. Bureau of Reclamation also joined the suit, saying that New Mexico is allowing people to use more water than they legally should. If New Mexico loses the case, which is being heard in the U.S. Supreme Court, southern farmers could be forced to curtail groundwater pumping, and the state would likely have to pay out billions of dollars in damages.

EIS in the pipeline, other questions remain

Opening a new mine is no easy task, and the company still must find water and procure federal and state permits.

In 2010, NMCC started working to line up permits and perform baseline studies on wildlife and water. And in 2015, the U.S. Bureau of Land Management released a draft Environmental Impact Statement for how the proposed open pit mine, its mill, waste rock pile, stockpile and other facilities might affect things like local wildlife, water supplies and vegetation.

Hillsboro residents, environmental groups, Turner Ranch Properties—which owns the nearby Ladder Ranch—and New Mexico’s two U.S. senators all submitted comments pointing out problems in the analyses from the mine and the federal government. At that time, the New Mexico Interstate Stream Commission noted that BLM didn’t adequately consider the project’s impacts on New Mexico’s ability to meet its Rio Grande water delivery requirements to Texas. And the Elephant Butte Irrigation District and the New Mexico Pecan Growers commented that pumping groundwater for the mine could affect water rights owned by its members along the Rio Grande.

Next, the BLM will issue a final EIS and, eventually, a decision on whether the mine can proceed. Opponents of the mine, meanwhile, asked the BLM to require that the company complete a supplemental EIS, which is required under federal law if a project changes substantially or new information arises.

According to the BLM, the agency will release an answer on that issue as soon as this week.

There were also questions as to whether the mine’s pit lake would be on federal or private land, which would affect which water quality regulations would apply to the company. According to the company’s plans, the existing pit would be enlarged from 102 to 169 acres.

If the New Mexico Environment Department, which did not respond to requests for information for this story, agrees that the pit is “private water” it would not be subject to surface or groundwater quality standards under the federal Clean Water Act.

The company will also need a new mine permit from the New Mexico Mining and Minerals Division.

Regardless of the options NMCC chooses to find water, the company will need state approval. Any groundwater pumping will require a permit from the Office of the State Engineer, for instance. And the agreement to offset water depletions with the Jicarilla Apache Nation’s water isn’t a done deal yet, either.

Conversations about Copper Flat made their way to the Office of the Governor, as well. In an April 2017 email to State Engineer Tom Blaine requesting a meeting about NMCC’s permit application, Deborah Peacock, a board member of NMCC and THEMAC, noted she spoke recently with Gov. Susana Martinez’s Chief of Staff Keith Gardner about Copper Flat. Peacock, a patent attorney and regent of New Mexico Tech, copied Gardner on the message, noting she wanted to “keep him in the loop.”

For now, however, Wechsler’s decision has many wondering how the project can realistically go forward without Frost and Gray’s water rights.

In an emailed statement to NM Political Report, the attorney for Turner Ranch Properties, Tessa Davidson, said the group was pleased with the judge’s decision.

“In the case, New Mexico Copper Corporation took the position that its water rights claims were exempt from New Mexico’s constitutional requirement of beneficial use,” wrote Davidson on behalf of her client. “The judge’s decision confirms that beneficial use is the basis of all rights to use water in the state, and that no particular water user, or type of industry, is exempt from the law.”