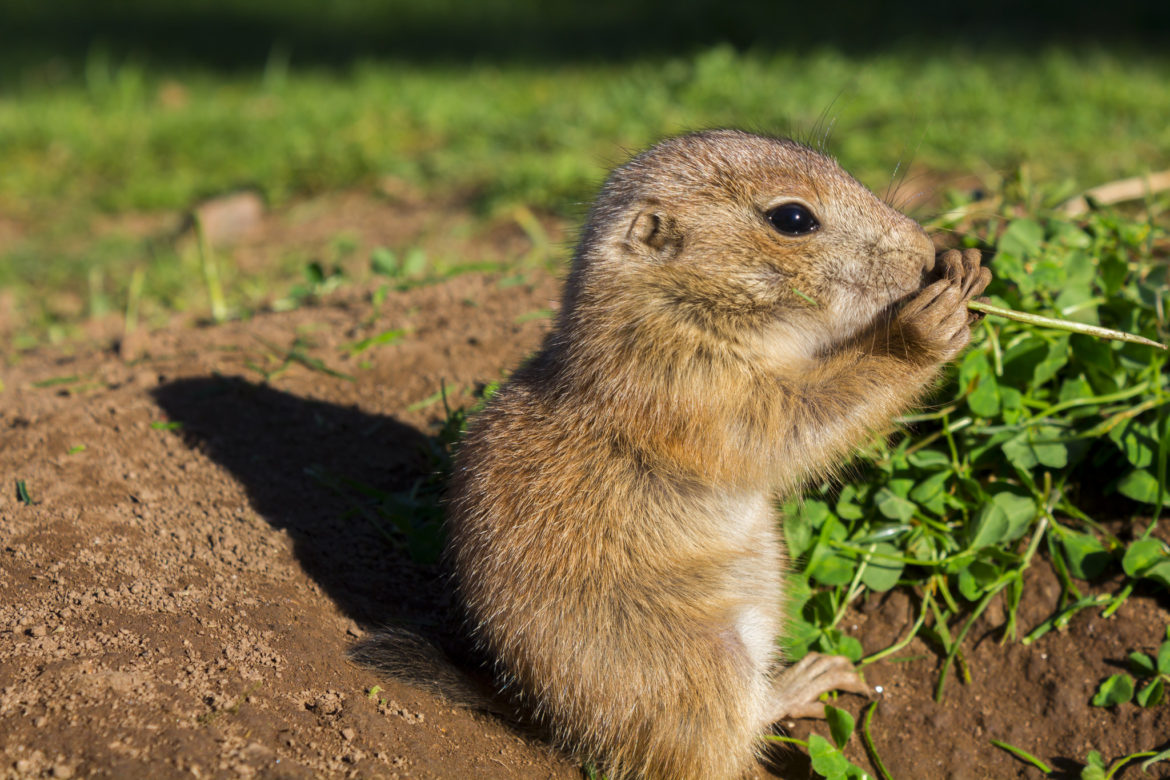 Prairie dogs are complicated creatures. In addition to confounding property owners by burrowing on land slated for shopping malls or horse pastures, they sometimes defy accepted biological principles. Unlike many social animals, instead of dispersing as they age, prairie dogs stick close to home, preferring to live cooperatively with relatives. In fact, prairie dogs are actually more likely to immigrate after their kin disappear. And at least one prairie dog expert thinks the socially complex animals speak a real language.

But the cinnamon-colored critters have many enemies, who blame them for everything from lost property value to incidences of the plague. Behavioral ecologist John Hoogland studied Utah prairie dogs — one of five species endemic to North America — for 11 years at Bryce Canyon National Park. Utah prairie dogs have been on the federal endangered species list since 1973. Numbering close to 95,000 in the 1920s, they dropped to less than four percent of that number in approximately 50 years. “Most people out there hate them,” Hoogland says. “There aren’t very many out there on public lands. On private lands, they shoot and poison them. They’ve got a tough row to hoe.”

A Utah prairie dog peers from its burrow at Bryce Canyon National Park. Biologists estimate that 95,000 of the animals existed in the 1920s. When the species was federally protected in 1973, approximately 3,300 remained. Today, some 35,000 exist.
James Marvin Phelps/Flickr
Now, according to a recently leaked memo from the U.S. Fish and Wildlife Service, how the country regulates federally endangered species is changing in ways that may be especially detrimental for politically fraught creatures such as the Utah prairie dog.

By themselves, these changes would be unsurprising, given the Republican party’s efforts to rollback science in other departments, such as the Environmental Protection Agency. But taken together with other messages coming from the Department of the Interior – such as its leaked strategic plan, and its review of how its own actions burden domestic energy production – this memo may signal that a profound erosion in biodiversity protection is underway nationally, in order to push energy development.

In December 2017, E&E News released a leaked U.S. Fish and Wildlife Service memo that revised how the agency assembles scientific data about rare species. Previously, species status assessment teams, composed of scientists who were experts in related fields, gathered the best available data about an organism. The Fish and Wildlife Service would use that information to make decisions about whether to list the species. Per the memo, teams must now include state-appointed members. The new policy went into effect on Nov. 1.

Gavin Shire, chief of public affairs at the Fish and Wildlife Service, describes the change positively. “Prior to the memo, we often included state experts in the (assessment team) development, but in a less formal way,” Shire said by email. “We expect the composition of the teams will be largely the same. The memo simply formalizes the expectation and provides some assurance to state wildlife agencies that (the Fish and Wildlife Service) will be involving them.”

But to conservation organizations, the assessment team memo is just one example of how the Interior department — emboldened by an anti-conservation, anti-regulatory administration in control of both Congress and the White House — has found new strategies to replace science with politics, weakening the laws protecting the country’s biodiversity. According to the leaked memo, assessment teams must now include at least two representatives from each state in which the species is found, including one appointed by the state governor.

“The requirement to include a representative from the governor’s office is a blatant attempt to infuse politics in the scientific process,” says Ryan Shannon, staff attorney with the nonprofit Center for Biological Diversity. “Nothing in the memo requires them to have any kind of science bona fides. It could be anybody.”

Species status assessment teams were devised as a way to gather all of the relevant information for the listing process. Depending on the plant or animal under consideration, members may range from geneticists to GIS experts to population modelers. “All these (endangered species listing) decisions need to be made under the best available science,” Shannon says. “We needed one scientific document, one source with all the current threats, recovery information, all the current data on a species.”

While he’s not opposed to involving non-scientists in endangered species management, Shannon thinks that stakeholders such as private landowners, conservation organizations, or state officials should weigh in only after assessment teams develop a range of options to protect or recover an endangered species. “That’s an appropriate time to say, amongst these options, let’s all come together and figure out what works,” Shannon says. “But to bring them in at the front end and try to politicize the science is, I think, just entirely inappropriate.”

He points out that the stakes are especially high with species such as gray wolves, whose range spans many wolf-antagonistic states. “You could be in a situation where each of the (teams) would have individuals from states that have openly stated they want to have the species delisted,” Shannon says. For species such as gray wolves — or Utah prairie dogs — state appointments could become a matter of existence or extinction.

Once found across much of North America, gray wolves live in nine states today, including Alaska. Under Fish and Wildlife’s new policy, eighteen appointed state representatives may now participate in federal species assessment teams for wolves.
Jethro Taylor/Flickr
The Fish and Wildlife Service is part of the Department of the Interior, and this change to the scientific process of deciding whether a species is going extinct fits in with Secretary of the Interior Ryan Zinke’s push to foster domestic energy production on public lands by reducing regulations. The Trump administration sees laws that protect the country’s biodiversity – such as the Endangered Species Act, Migratory Bird Treaty Act, Bald and Golden Eagle Protection Act, and others – as also hindering extractive and domestic energy production. Trump’s executive order on energy production and economic growth exhorts federal agencies to rescind or revoke regulations that “potentially burden” domestic energy resources. In response to the executive order, Zinke produced a report in October 2017 focusing on how his department burdens domestic energy production. Zinke is interested in making complying with the Endangered Species Act faster and less expensive for the energy industry. One strategy the report suggests is “elevating the role of states in species conservation.”

The Fish and Wildlife Service’s principal deputy director, Greg Sheehan, who signed off on the leaked assessment teams memo, has long had the Endangered Species Act in his sights. Sheehan became director of Utah’s Division of Wildlife Resources in December of 2012. In 2013, a lawsuit brought by the Pacific Legal Foundation and the People for the Ethical Treatment of Property Owners used Utah prairie dogs as a test case to argue that rare species whose entire range occurred only within one state — which include some 70 percent of federally protected species throughout the country — should not be regulated by the Endangered Species Act. A Utah district court agreed.

Following that ruling, the state removed thousands of Utah prairie dogs from private land each year and legalized any take of prairie dogs on the properties in subsequent years. When the 10th Circuit Court of Appeals reversed the finding in March 2017, management of the gregarious animals returned to the federal agency. According to Deseret News, Sheehan, who was still the DWR director at the time, said that “one of the biggest challenges to managing Utah prairie dogs are federal rules that do not allow biologists the flexibility they need to do what’s best for the species and for the people who live in areas where prairie dogs are found.” He was especially concerned with how the Endangered Species Act restricted prairie dog management on private property — where most of the animals are found.

Sheehan’s perspective reflects the Interior department’s business-friendly, anti-regulation stance under the Trump administration. Unlike many previous Fish and Wildlife Service heads, Sheehan is not a career federal employee, and his educational background is in business administration and finance. Zinke appointed Sheehan to a newly created position in August 2017. Because no director has yet been appointed, Sheehan is the service’s de facto leader.

In a way, Sheehan’s leaked memo makes an end run around the 10th Circuit Court of Appeals’ finding about regulating species that occur entirely in one state: State-appointed representatives from Utah will now take part in developing the federal Utah prairie dog assessment. But this case is not just about one man – or even one state’s – approach to one species of prairie dog.

Critics such as Shannon worry this new assessment process will dilute the scientific integrity of the Endangered Species Act wholesale. Shannon filed a notice of intent to sue the Fish and Wildlife Service on behalf of the Center for Biological Diversity, alleging that the new policy created by the memo violates the Endangered Species Act, which requires that the best available science guide assessments of species status, not politics. The suit also rests on the way that the change was made. “The Administrative Procedures Act… requires all agency rulemaking to go through notice and comment,” Shannon says, so that the federal government doesn’t operate on the basis of internal rules without public knowledge. “This is clearly rulemaking – it’s a requirement, a clear order going out to Fish and Wildlife.” According to the Center for Biological Diversity, the Endangered Species Act similarly requires a period for public review and comment when the Fish and Wildlife Service makes changes to agency guidelines.

The Fish and Wildlife Service disagrees with this interpretation of the Endangered Species Act. “Our desire to communicate with states to the maximum extent possible is a procedural rather than regulatory change and so does not need to be published in the Federal Register,” Shire says.

Shannon expects to see impacts from the change to assessment teams soon. On the one hand, he suspects that in some states, team appointees afraid of political backlash will push to deny listings for critically imperiled species, regardless of the science. “We’ll also see it on the back end as the Trump administration and other right wing groups up the effort to delist species,” he says.

Meanwhile, the regulatory rollbacks continue. According to the Department of Interior’s leaked draft strategic plan, this change to assessment teams is just one from a list of transformations that Zinke plans for how natural resources are regulated in the nation, ultimately easing the burden on extractive and energy industries. The department also plans to look into ways to include the economic burdens of protecting disappearing species as a factor in deciding whether to federally protect them, for example.

A different presidency could, in theory, re-establish the rare species protections being undone across the West by the Department of the Interior. Whether species keep existing long enough to benefit is another question. After 40 years of protection, Utah prairie dogs recovered to approximately 35,000 in number by 2009, or a third of their original count. “Plague, shooting, poison, and the destruction of habitat means there aren’t many of them left,” Hoogland says. “The future is not very bright for the species.”