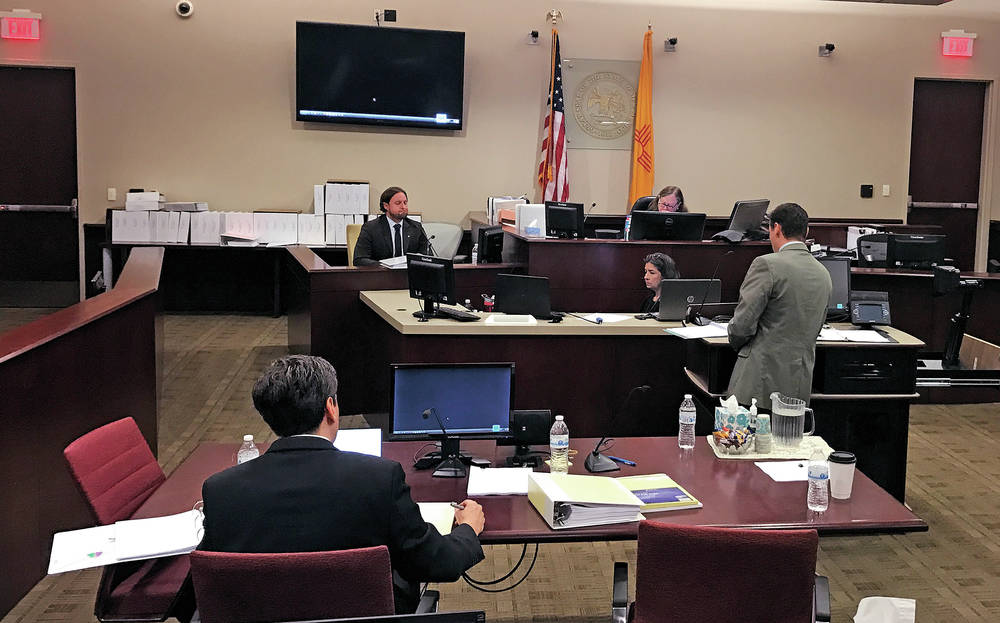 If state Sen. Bill Soules had his way, New Mexico would invest an extra $375 million in public schools right now.

Where the cash-strapped state would find that money is another matter altogether.

Soules, a Las Cruces Democrat, has once again introduced legislation calling for the state to follow the recommendation of a decadeold study and funnel hundreds of millions of dollars more into its public education system — one that generally ranks at or near the bottom in most national reports.

But Soules’ bill doesn’t have a chance in the upcoming legislative session. And he knows it.

“Every year I put that in there,” he said. “I know there’s not enough money for it, and I know it’s not going to get funded. But it’s to remind people how we are underfunding education year after year after year.”

If Soules’ bill is a muffled drumbeat that barely registers, then a still-undecided lawsuit asking a state court to force New Mexico to increase investments in its per-student funding formula to meet constitutional mandates may serve as the cymbal crash that makes both the governor and Legislature act on the matter.

As the 30-day legislative session begins this week, the lawsuit is the 800-pound gorilla with nowhere to sit — yet.

Some lawmakers from both political parties, as well as experts and attorneys involved with the case, agree the lawsuit may have lit a fire under both Gov. Susana Martinez and legislators to propose putting more money into public education this year — especially into programs that benefit such “at-risk” students as English-language learners, special-education children and those who come from impoverished families.

“I’m not certain that the lawsuit itself is responsible for that, but it encouraged additional money to that area, especially after we listened to some of the testimony of that case,” said Sen. John Arthur Smith, D-Deming, who heads the Senate Finance Committee.

Rep. Jimmie Hall, R-Albuquerque, a member of both the House Appropriations and Finance and House Education committees, simply said one word — “yes” — when asked if the lawsuit is playing a role.

He said lawmakers from both parties have for years tried to increase funding during times when state revenues were low. This year, he said, with projected revenues looking better, “we have money and we are making a serious attempt to help some of those areas that have not had as much funding because we haven’t had money in past years.”

During a Journey Santa Fe-sponsored talk last week, Senate Majority Leader Peter Wirth, D-Santa Fe, told a crowd of about 100 people “there is absolutely no doubt in my mind that the lawsuit is having an impact” on increased education funding.

Members of the Legislative Finance Committee, he said, are aware of the potential liability that the case carries with it.

The governor and state legislators may have more money to dole out this year. In late December, a legislative report forecast over $280 million in new revenues to spend or to bolster cash reserves.

Lawmakers and lawyers agree this extra money makes a difference when it comes to increasing public education funding.

The governor’s proposed $2.7 billion education budget represents about 44 percent of the state’s overall budget of $6.2 billion.

Public Education Secretary-designate Christopher Ruszkowski said Friday that the state Public Education Department has proposed an increase of $71 million in professional development programs such as Teachers Pursuing Excellence and academic initiatives like the K-3 Plus summer program for young students and New Mexico PreK, a state-funded preschool initiative. The state also is proposing a 2 percent salary increase for teachers.

The increased spending proposal is a result of listening to teachers, principals, superintendents and other educators in the field, Ruszkowski said.

He doubted that the lawsuit played a part in the state proposing more money for education.

“We want to make these investments,” he said. “Now, the money can be targeted specifically” toward programs the administration supports, as well as teachers.

But Gail Evans, legal director for the New Mexico Center on Law and Poverty, one of the plaintiffs in the case, said the lawsuit has, at least, inspired state legislators to push for more money.

But she also told reporters during a teleconference last week that extra money “is just a small step along the way. … Adding this money doesn’t come close to meeting the need. It’s a step in the right direction.”

The lawsuit was brought against the state in 2014 by two sets of plaintiffs — groups of students, parents and school districts — represented by the New Mexico Center on Law and Poverty and the Mexican American Legal Defense and Educational Fund.

The plaintiffs argue the state is not meeting its constitutional requirement to provide enough funding for students and that more needs to be done to ensure all students have access to such programs as prekindergarten, K-3 Plus and dual-language classes. Not all children have equitable access to social and health services, counselors and tutors, they say, arguing that such factors can mitigate the impact of poverty on learning.

Lawyers for the state maintain it is doing everything it can to support public education and argue the amount of money allocated for education doesn’t matter as much as how the funds are spent by individual school districts. In a lengthy closing brief, those attorneys laid out a series of programs they said are slowly working to improve education in New Mexico.

But they said the state constitution does not guarantee education outcomes.

And, they argued in the brief, the plaintiffs failed to prove “increased funding will lead to higher student outcomes.”

Both sides filed closing arguments last week. Now each side has less than a month to file rebuttals.

Judge Sarah Singleton, who retired after overseeing an eight-week trial in the case in the First Judicial District Court in Santa Fe last summer, is expected to issue a ruling by spring.

The case could have long-term financial repercussions for a state that has been grappling with financial challenges for years.

If Singleton rules in favor of the plaintiffs, she could order the Governor’s Office to present a plan to address the problem, which the Legislature, in turn, might have to support — regardless of the financial implications.

Evans said the programs and resources the plaintiffs want to see enacted do cost money. But she said it will be up to the court to decide how best to address the issue if it rules in favor of the plaintiffs.

“We don’t expect the court to say, ‘You need to get this much money from this pot of money or here’s how the state should go about raising the money,’ ” she said. “But there are many options that the state has that it could use to come up with resources that it needs.”

Regardless of how Singleton rules, she said, the other side will most certainly appeal, a process that will take time.

Soules — who was reluctant to say the lawsuit is playing a role in current efforts to raise education spending — nonetheless said anyone interested in education is waiting for Singleton’s decision.

“Everybody is watching that lawsuit to see … whether the judiciary will say, ‘You are not meeting your constitutional obligation, you must increase funding.’

“Everyone realizes we need to put more money into education.”