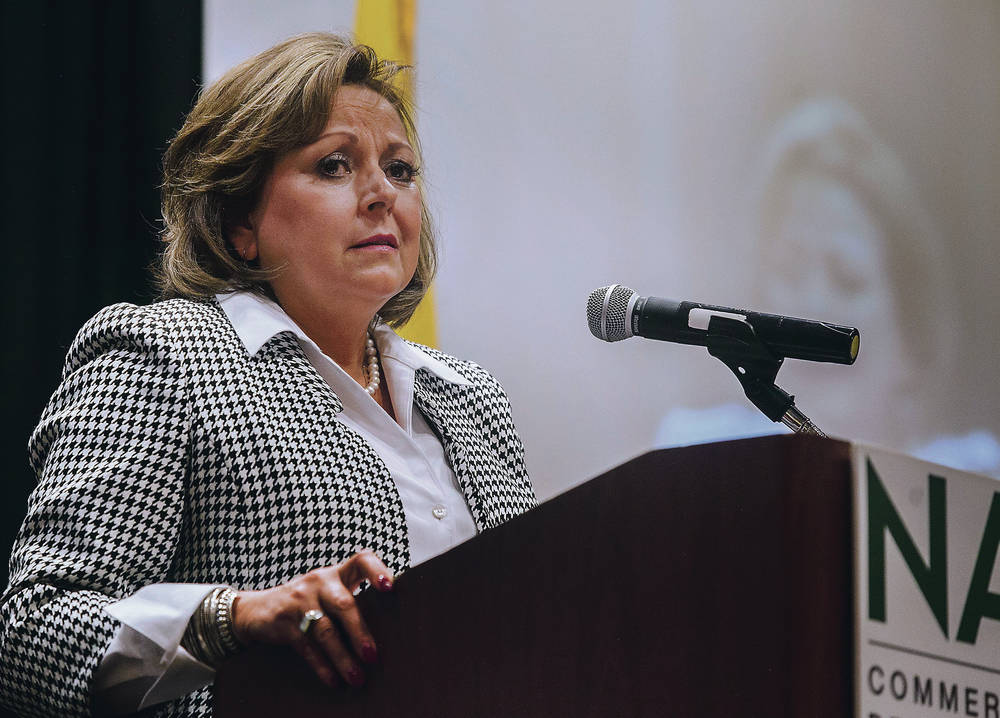 Gov. Susana Martinez leaned in, and a discernible vigor crept into her voice.

Speaking at a news conference earlier this month about her proposed state budget, the former prosecutor seemed in her element, discussing an issue that has come to define her two terms in office: crime.

She started her presentation on the state’s spending plan talking about a crime wave, and when a reporter asked about bail reform, she eagerly lambasted new court policies as creating a “revolving door at the jail.”

Yes, there was talk of tax reform and education, too.

But if there is any issue Martinez has felt most comfortable railing about in front of the cameras, it is crime.

In murmurs, legislators still describe Martinez as a prosecutor — someone more inclined to press her case as if arguing to a judge or jury than to weigh the issues and forge an agreement or, worse, compromise.

Even after seven years in office, she still seems more comfortable as the district attorney from Las Cruces than as the governor of New Mexico, poised to leave a legacy that is mostly undefined.

Martinez, a Republican, has seen her political prospects dim over the last few years. That’s extraordinary, given how brightly her star had shined.

In 2014, she was sometimes mentioned as a potential nominee for vice president — as exactly the sort of purple-state Republican that could have crossover appeal and keep the GOP from boxing itself in as a party for white men in a rapidly changing America. She is, after all, the first Latina ever elected governor of a state.

After taking office, Martinez made plenty of enemies in her own party, leading a hard-charging faction that demanded fealty and rained down money on primary challengers to punish the insubordinate. In 2013, a profile published by the magazine National Journal described her top political consultant, Jay McCleskey, as advancing a “mercenary, dog-eat-dog style of politics” and as walling her off from dissent.

But they were winners.

Democrats were in disarray, and Martinez handily won re-election in 2014, and the GOP won a majority in the state House of Representatives for the first time in more than a half-century. It held onto the Secretary of State’s Office and took back the post of commissioner of public lands.

When the price of oil dropped, however, New Mexico landed in a budgetary crisis. The jobless rate has consistently ranked among the worst in the country. Although the revenue picture has brightened significantly in the past few months, fewer New Mexicans are working than before the Great Recession, while neighboring states are booming. Crime rates spiked in Albuquerque, the state’s biggest city. And Martinez faced mounting scrutiny of her personal life after a raucous holiday party at a Santa Fe hotel in 2015 led to an embarrassing 911 call, slurred speech and all.

By the end of 2016, voters had relegated Republicans back to the minority in the House, and a rival faction was poised to take over the state Republican Party, leaving Martinez with that much less institutional support to launch a campaign for another office in 2018.

Meanwhile, the governor had sparred openly with Donald Trump during his campaign, only to watch him become president.

Her political future upended, Martinez seemed to flail for relevance. During the regular legislative session last year, she vetoed bills apparently at random, nixing proposals that had won broad support. She even scratched funding for higher education from the annual budget, forcing a special session.

The moves, at least as reflected in her popularity, backfired. Martinez saw her approval ratings slide throughout 2017, and she sank into the list of the least popular governors in the country.

By late October, the research and polling firm Morning Consult was reporting that only 37 percent of registered New Mexico voters surveyed approved of her job performance, while 52 percent disapproved.

Martinez has not been able to win even when she is winning.

The governor expanded access to Medicaid, and New Mexicans have signed up in droves. But she calls the Affordable Care Act a disaster, and Medicaid is not an issue likely to win her many votes among the Republican base.

New Mexicans voted for a constitutional amendment on bail reform in near-politburo numbers — it passed with 91 percent of votes cast — and now she is calling to repeal it.

Whatever goodwill she could count on from Democrats appears to have disappeared, too.

Martinez entered office with an ambitious education agenda. Elements that would later become intractably controversial, such as a proposal to hold back third-graders who are not reading at grade level, initially won backing from Democrats. But they have since have spent the last several sessions blocking it.

In recent years, Martinez has pushed tough-on-crime bills — calling for an expansion of the state’s three-strikes law and for reinstating the death penalty.

It seems a fertile political hunting ground: Crime has indeed risen. The topic dominated the mayoral race in Albuquerque last year. But that race also drove out large numbers of voters and propelled a progressive Democrat into office. Again, the governor’s moves seemed to backfire. And while Martinez, if recent media events are any indication, will push hard on crime in this legislative session, many observers say such proposals won’t get to her desk.

And Martinez has proven an effective retail politician, adept at working a crowd, though public appearances have been increasingly scarce.

There have been some rays of light breaking through the cloudy economy lately. The state’s unemployment rate has inched downward over the last year. Oil prices have bounced back. The Permian Basin has become another term for boom. New Mexico continues to see the tourism industry grow. Facebook is building a data center in Los Lunas. In turn, the construction industry has improved, too.

All of this is buoying the state’s revenues.

The governor and legislators appear set to avoid another round of budget cuts. In fact, Martinez and top legislators alike are calling for raises for state employees and teachers.

All of this has led to what would appear at first to be a cautious optimism at the Capitol.

But it also could be just the sort of resignation that heralds the dog days of a lame duck administration.

Legislators and lobbyists are resigned to the reality that their big ideas will not come to be this year. There likely will not be any dramatic changes in policy or any splashy projects. Instead, most around the Capitol seem eager to pass a budget, try to stem rising crime rates and get on with the election year.

After all, in another 12 months, there will be another governor.

Republican pollsters say that after what some analysts have described as a “lost decade” for the state’s economy, voters are tired of gridlock and hungry for some sort of vision. The governor’s predecessor, Democrat Bill Richardson, may have courted controversy with projects like Spaceport America and the Rail Runner Express commuter train and, perhaps, scandal with his handling of the State Investment Council. But at least you knew what his legacy would be.

The question is how Martinez will choose to leave office. She could surprise, as she certainly did last year, and go to the brink in a battle with Democrats over crime or tax reform. Or she could surprise by trying to forge at least some sort of consensus on something — anything — in her last year as governor.

Will the woman who promised to be the biggest thing for the state’s Republican Party since Pete Domenici salvage a legacy, or will she go out as the New Mexican version of Nancy Grace?