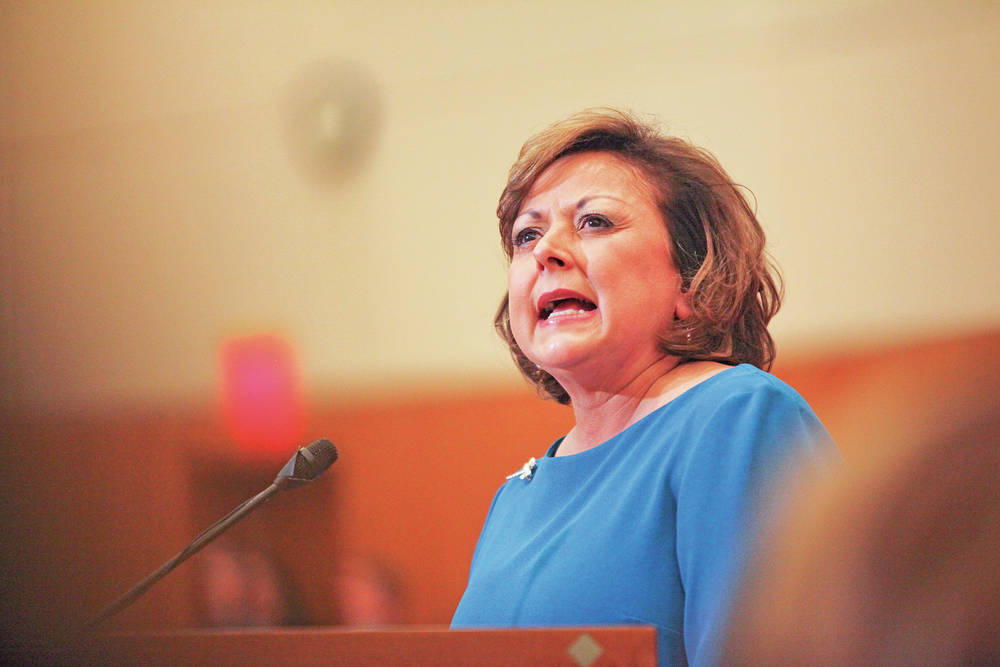 Gov. Susana Martinez delivers her State of the State address at the Capitol on Tuesday, the first day of the 2018 legislative session.

Gov. Susana Martinez signaled Tuesday she is not going quietly into her last year in office, opening a 30-day session of the Legislature with a State of the State address that touted issues she has pushed throughout her administration and steeling herself for one last showdown with Democratic lawmakers.

The two-term Republican governor called for comprehensive tax reform but did not offer any specifics on what that might involve, urged tougher criminal sentences and raised many of the same education and economic policies she has regularly mentioned in her annual address.

With the state’s finances improving, offering a reprieve from another round of budget cuts, many Democrats and Republicans alike had come to expect this monthlong session would not be marked by any particularly ambitious initiatives or changes in policy as Martinez prepares to leave office. Instead, many seemed ready to approve a balanced budget and take steps to try to stem the state’s rising crime rates.

Indeed, the governor did not offer any big new ideas.

But with her 54-minute speech, Martinez also seemed to challenge what had been a cautiously optimistic political consensus that she and the Legislature might work more cooperatively this year than last.

The 2017 legislative session turned into to a political standoff after the governor vetoed bills seemingly at random and nixed funding for colleges and universities. This necessitated a special session to rework the state budget.

Even as lawmakers have begun to look past the dog days of her last term toward what a new governor might bring, Martinez’s speech served as a reminder that she is still a veto-wielding political force with which legislators must reckon.

She began her address with a mix of humor and combat, telling lawmakers she considered forgoing her annual speech and simply letting legislators go to work. But, she said, because Democratic lawmakers sued her over her unexplained vetoes of 10 bills during the last session, she decided against that course.

“Sit back and relax because I’ve got things to say,” Martinez said to a few hoots and some applause.

Protesters unveil their banners before Gov. Susana Martinez begins her State of the State address Tuesday at the Capitol.

The speech got off to a false start when immigrant rights activists in the House gallery unfurled banners and took up chants calling for passage of the DREAM Act. A proposed piece of federal legislation, the measure would provide a path to citizenship for young people brought to the United States without authorization as children. Although Martinez has no power over that law, activists said the demonstration was meant in part to draw attention to her record on immigration.

Martinez then highlighted the state’s improving economy, pointing to an unemployment rate that has been inching downward, though it is still higher than any state except Alaska.

Analysts have said New Mexico could expect about $199 million more than last year’s budget. The governor said Tuesday the state could see another $330 million.

“Maybe we should give a big chunk of that back to the taxpayers,” Martinez said, without offering any details.

She and the Legislative Finance Committee alike are proposing bigger budgets than last year’s. And both are calling for raises to teachers as well as state workers.

Martinez and the Legislative Finance Committee are also proposing to increase the state’s reserve funds.

Martinez said her budget plan will leave the state with more than 10 percent of annual spending in reserves.

The governor called on legislators to approve comprehensive tax reform, but she did not offer many details, and her office did not respond to a reporter’s request to clarify her comments.

Martinez mentioned tax reform as part of a six-part economic plan that also includes making job training incentives a permanent part of the state budget, expanding efforts to grow industries such as tourism as well as more efficient spending on public works projects.

The governor cited improving graduation rates and railed against teachers unions. She also again raised the issue of what she calls social promotion — teachers advancing students to the next grade level even though they are not reading proficiently.

“Everywhere I go, parents are shocked to learn that 21,000 New Mexico students between first and third grade were passed onto the next grade last year without being able to read on grade level. Many of these students will sadly face frustration and discouragement year after year,” Martinez said. “But even more concerning is that, in most districts, parents aren’t even being informed of their child’s low reading proficiency; not even presented with the option of having their son or daughter repeat the grade in order to catch up.”

The governor devoted much of her speech, though, to crime.

Gov. Susana Martinez applauds State Police Officer Dwayne Simpson, who was shot at in August during a traffic stop. The bullet hit the officer’s badge.

State Police Officer Dwayne Simpson sat behind Martinez throughout her speech, and at one point, she held up a mangled piece of metal that had once been his badge.

Choking up at times, Martinez recounted the story of how a man with a criminal history shot at Simpson during a traffic stop, striking the officer’s badge.

Martinez offered the case as an example of a “catch-and-release” system in the state’s courts following voters’ overwhelming approval of bail reform in 2016.

The constitutional amendment, which took effect over the summer, allows judges to detain suspects without bond if they are considered dangerous, a step prosecutors did not seek in the case of the man who shot Simpson. The bail reform amendment also guarantees suspects who are not dangerous will not be detained simply because they cannot afford to get out of custody.

Backers have argued it is too early to know for sure what impact the bail reform amendment has had on crime rates that have been rising since before voters even approved it.

Martinez has called in the past for repealing and replacing the amendment, something she did not repeat Tuesday.

But she still urged tougher sentencing laws and supported reinstating the death penalty in certain cases.

House Speaker Brian Egolf, a Democrat from Santa Fe, said the speech still offered several points of agreement between Republicans and the party that controls the Legislature, such as toughening penalties for those who use a firearm to commit a crime and increasing funding for early childhood education.

The speaker said Democrats and Republicans may continue to disagree on the solutions to crime but can agree on certain steps, such as putting more police officers on the streets.

The cautious optimism that seemed to prevail heading into the legislative session could still hold, he suggested.

“I would certainly say it was more conciliatory and indicative of a willingness to work together,” Egolf said of the speech.

House Republican Leader Nate Gentry of Albuquerque said there has been more dialogue between parties and chambers than in the recent past.

Holding out hope that the Legislature could avoid middle-of-the-night showdowns during the coming 30-day session, Gentry said: “There’s a real willingness to address various issues in a bipartisan way.”