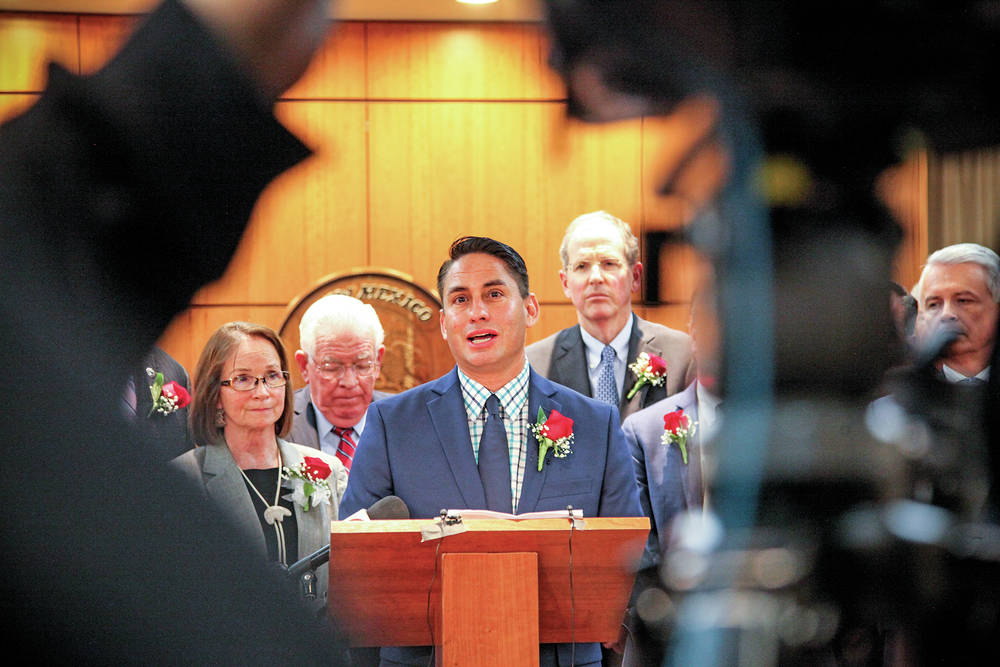 State Sen. Howie Morales delivers a response to Gov. Susana Martinez's State of the State address Tuesday on behalf of the Senate Democratic caucus at the Capitol.

“There’s a new day on the horizon for the state of New Mexico,” said Sen. Howie Morales, D-Silver City, who delivered the response from his caucus to Martinez’s final State of the State address.

“Soon, we will have a new leadership team that will guide the state in providing more jobs, better classrooms, protection for our environment [and] safer places for our communities to raise our families and lead prosperous lives,” he said. “New Mexico has been on too many of the lists, at the bottom, for far too long.”

In her speech, Martinez, who leaves office at the end of this year, focused on issues she has been working on since she was first elected governor in 2010. These included longer criminal sentences and mandatory retention of hundreds or even thousands of third-graders who are not proficient on standardized reading tests.

But Democrats indicated they were ready to move on.

“I’m confident that there’s a brighter future for the people of our state, and change is just around the corner,” said Morales, who was flanked by Democratic leaders, including newly elected Senate Majority Whip Mimi Stewart of Albuquerque. “But the secret to change is to focus all of our energy not on fighting the old but on creating the new.”

Morales, who is seeking the Democratic nomination for lieutenant governor, said priorities Democrats intend to address during the session include early childhood programs, education, public safety and the health and welfare of all New Mexicans.

“Our focus is clear,” he said.

“I hope that this sends a clear message to our educators and state workers: We value your contributions and thank you for the service to our state,” he said.

Morales said Democrats will consider new laws that carry penalties, but he criticized Martinez, a former prosecutor, for having a myopic focus on crime over the past seven years.

“Public safety is a critical issue for us Democrats, but we have a very different view than the governor,” he said. “While she solely focuses on punishment and prosecution, we believe that it’s just as important to have prevention and rehabilitation as part of that equation. This will go further in breaking the cycle that has unfortunately left New Mexico as one of the most crime-ridden states in this nation.”

Bail reform appears to be another issue of contention between the governor and Democrats.

Martinez criticized a constitutional amendment on bail approved by voters in 2016, that she said certain judges have turned into a catch-and-release program for criminals.

“We have no intention to do any repealing or replacing,” Morales said. “The measure was supported by 87 percent of voters — and by the governor, once upon a time.”

State Sen. Peter Wirth answers questions Tuesday at the Capitol about the Senate Democratic caucus’ response to the State of the State delivered by Gov. Susana Martinez’.

“This bail reform, our chief justice who’s in the same party as Governor Martinez, has called the most significant criminal justice reform since statehood, so the idea that we would repeal that, I think it’s completely off the table,” Wirth said.

Martinez cannot get a new measure on bail procedures on the ballot unless both the Senate and the House of Representatives approve it. Both chambers are controlled by Democrats.

What isn’t off the table for Democrats are tax proposals, which Martinez has vehemently opposed during her time in office.

Morales said he plans to propose a tobacco tax that would generate $89 million for schools, and he said there will probably be other tax proposals, too.

“I’m not aware right off hand on which ones those might be,” he said. “I know the gas tax is often discussed as well.”

But Democrats’ first order of business will be to approve a new nurse licensing compact that allows nurses licensed in other states to work in New Mexico without getting a separate certificate.

“All of our communities, especially in the rural areas, depend on these nurses,” Morales said. “The impact that would take place if this doesn’t happen would be devastating. So what we’re looking forward to this week, starting today, is to have legislation in place that would grandfather us in with this nurse licensure compact.”

The measure for nursing licenses could sail through the Legislature as soon as Thursday.

“Last year at this time, we spent weeks debating how we were going to address the issue of a shortfall,” he said. “We had to make difficult decisions, and devastating cuts had to be made just to keep the lights on. We also had to endure some of the changes that occurred through line-item vetoes that were unnecessary by the governor.”