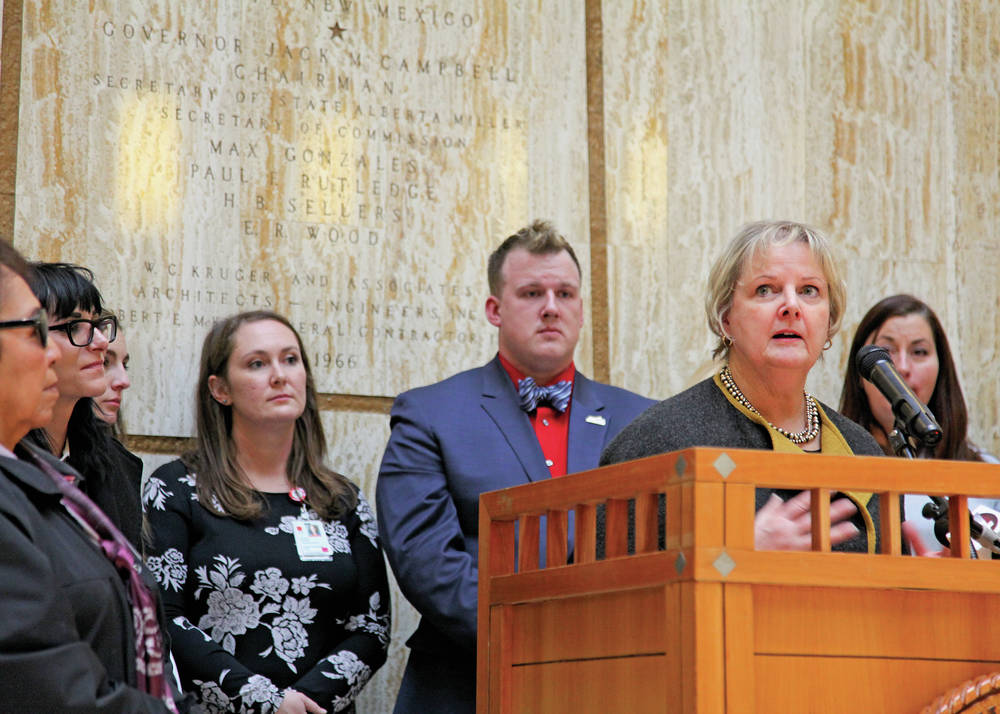 Rep. Deborah Armstrong, a Democrat who chairs the House Health and Human Services Committee, speaks to members of the public and the media Wednesday following a meeting of the Senate approving a new nurse licensing compact.

The New Mexico Senate, moving to meet a tight deadline, on Wednesday approved a new nurse licensing compact to avoid what one lawmaker described as a health care crisis.

But several senators raised concerns as the bill sped through the Legislature that the compact might diminish nurses’ rights by ceding too much power to an out-of-state board about licensing in the profession.

Even so, an unexpectedly contentious debate revealed concerns about the licensing compact and how quickly lawmakers must approve it.

Some legislators described themselves as feeling backed into a corner — fearful of what missing the looming deadline might mean for patients and hospitals but unsure of whether the state is well-served by the compact in the first place.

New Mexico has been part of a compact since 2004 with two dozen other states, including many of its neighbors.

If the Legislature does not approve a new compact by the end of Friday, nurses working in New Mexico under licenses from other states will not be able to continue practicing, at least for a time. As New Mexico grapples with a shortage of nurses, hospitals have said missing the deadline would leave them with less capacity to care for patients.

“The issues that were raised in the Senate today do not fall on deaf ears,” said Rep. Deborah Armstrong, a Democrat from Albuquerque who chairs the House Health and Human Services Committee.

Nearly 400 students and nurses, representing more than 10 different nursing programs, stand together outside the Capitol on Wednesday before the Senate met to discuss a proposed compact that would allow would allow nurses licensed in certain other states to practice in New Mexico without getting a separate certificate.

Missing the deadline, however, would cause a “health care crisis in this state,” she said.

Colorado found itself in a similar spot, and its Legislature approved the compact Wednesday.

Nurses and nursing students packed the Senate gallery in New Mexico for the vote.

They heard several senators complain that they have been left with too little to scrutinize the agreement, then saw them support it anyway.

The new compact will include states not in the original agreement. It also changes requirements for background checks on nurses.

The compact also creates a commission to oversee the compact between the various states. That part troubled some lawmakers.

The bill’s sponsors feared these amendments would doom the compact. If the compact is not exactly the same as what other states have approved, they said New Mexico’s version might not be valid.

However, the director of the compact at the National Council of State Boards of Nursing told The New Mexican there would not be any issues with the amendments.

Some nurses have long been skeptical of the compact for other reasons, arguing such arrangements make it easier for hospitals to draw on traveling nurses, who might work relatively short times in one community and move on to another.

Pointing to the broad coalition of health care companies backing the measure alongside unions and the AARP, Sen. Cisco McSorley told a committee room packed with nurses: “The very hospitals and HMOs that are here in support of it are not your friend. They’re not your allies.”

“When it comes time to break a strike or stop your raises, this how it’s going to get done,” McSorley, D-Albuquerque, said of the compact.

Others counter that the solution to keeping nurses in communities is not to nix the compact. Rather, they said, it is to develop more training programs around the state and make those programs affordable to draw students from backgrounds that are underrepresented in the profession.

Gloria Doherty, president of the New Mexico Nurses Association, said her organization has concerns about how the compact might affect continuing education requirements and other issues.

But the consequences for patients would be too great for the state to pull out of the compact immediately, she said.

Doherty and the bipartisan group of lawmakers backing the bill said they would support other measures to address some of the concerns of nurses.