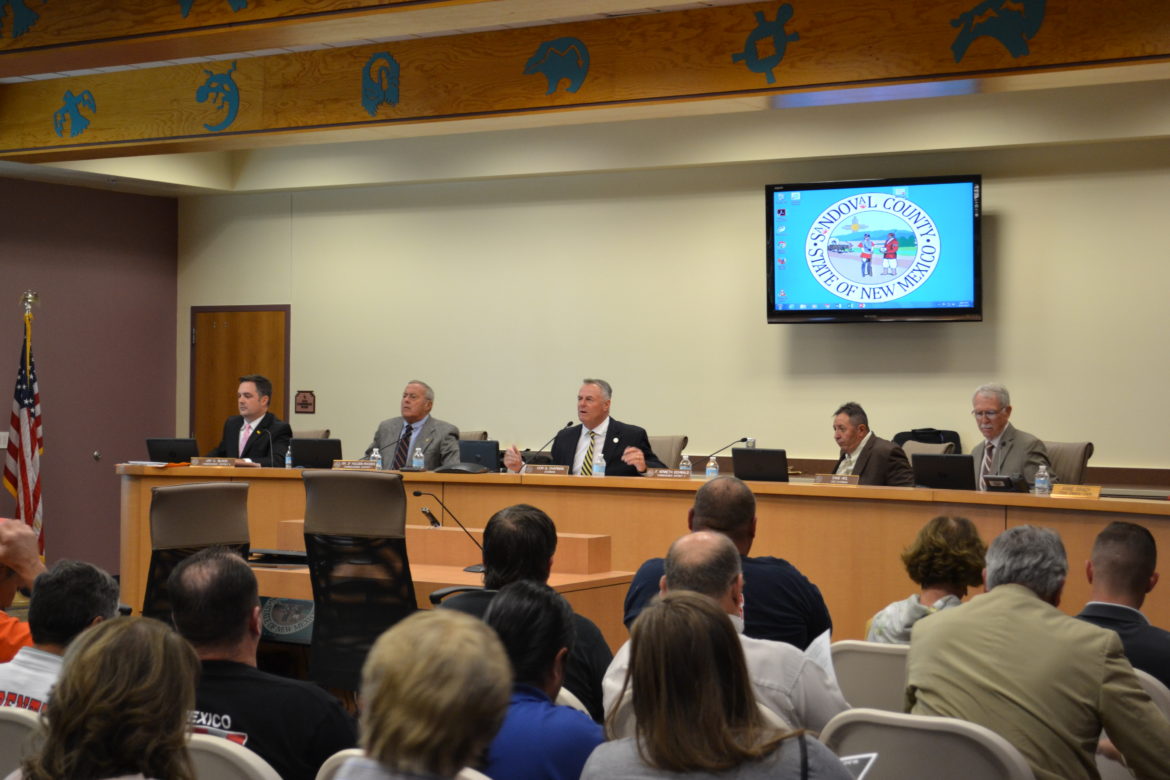 Commissioners approved a county-level right-to-work ordinance even as detractors promised to sue.

Early Friday morning, the Sandoval County Commission voted 3-1 to make the county the first to implement a right-to-work ordinance. Previous efforts at the statewide level repeatedly failed, while a citywide effort in Clovis decades ago was struck down by a federal court.

“This is our time to lead the state,” ordinance sponsor Jay Block said in arguing for the ordinance.

He said the bill would bring better wages, more jobs and would, in fact, help unions by increasing their rolls.

Union leadership and rank-and-file members who filled the room vigorously opposed the ordinance and said it would hurt unions and lower wages.

And they promised the passage by the commission wouldn’t be the end of the issue.

“We have lawyers, you have lawyers and we’ll see you in court,” New Mexico Federation of Labor, AFL-CIO President Jon Hendry told commissioners.

Right-to-work laws, which are in place in more than half the states in the country, bar unions from imposing mandatory fees on workers. The proposed ordinance would not apply to current companies and unions in the county or public unions.

Commission chairman Dave Heil, another sponsor of the ordinance, said the county would be represented pro bono by two law firms to defend the ordinance.

Commissioner F. Kenneth Eichwald later said one was Tampa-based attorney Brent Yessin, who represented a county in Kentucky that prevailed. Yessin frequently works on right-to-work efforts and works for the Florida-based nonprofit Protect My Check.

The two sponsoring commissioners also had support from Americans for Prosperity, whose state director Burly Cain was a frequent presence at commission hearings. AFP was founded by David and Charles Koch, billionaire brothers who advance conservative and libertarian causes.

“The commission’s vote allows hard-working New Mexicans to keep more of their paycheck and better compete in the workforce,” Cain said in a statement. “Employees should be able to choose whether to join a union – that choice should not be made for them by the government.”

Behind the scenes, Matt Patterson, a conservative commentator, appeared to direct parts of the process, according to emails obtained by NM Political Report from Inspection of Public Records Act requests from county commissioners. Yessin was also included on many of the emails, as were Cain and leaders of local business and libertarian groups.

Patterson and Yessin wrote an Albuquerque Journal column praising the Sandoval County right-to-work effort earlier this week, but did not disclose their role in the process.

At Thursday night’s meeting, Stephanie Ly, the president of AFT New Mexico read from a Powerpoint presentation she said Yessin presented at an event sponsored by commercial real estate group NAIOP. In that presentation to realtors, Yessin spoke of how right-to-work would hurt unions.

She said the county commission should stop looking to pass right-to-work, and had advice for the five commissioners.

“Stop the political bullshit and get to real policy,” Ly told the commission.

Opponents of the proposal came armed with an opinion from Attorney General Hector Balderas. Balderas’ office weighed in at the request of State Senator Benny Shendo Jr., a Democrat who represents parts of Sandoval County.

Assistant Attorney General Dylan K. Lange wrote that the ordinance “would likely be found invalid and unenforceable” on a number of levels, both running afoul of state law and the National Labor Relations Act. Lange added that a provision that directed the county’s sheriff’s department to enforce the law could divert law enforcement resources.

“Governor Martinez said in her state of the state address just this week that ‘we must make New Mexico a safer place for families and the worst place in America to be a criminal’. I urge Sandoval County’s commissioners to heed this admonition, and reject the right to work ordinance,” Shendo said in a statement.

Supporters of right-to-work pointed to federal court decisions in Kentucky and a countywide minimum wage law in Santa Fe County as reasons why this will prevail. .

Commissioner Don Chapman, who abstained from the vote, expressed concern at the cost to taxpayers from a lawsuit. And he read from a letter from the county attorney to each member of the commission in November. The attorney said that the state would likely immediately be sued and lose if they passed the ordinance. She said the fact that Sandoval County is not a “home rule” county, which would give the county more power to make its own laws, would be a key factor in any court case.

When asked at the meeting if her opinion changed, she said it had not.

Chapman said others he trusted also said the ordinance would be “dead on arrival.”

But Block said he was tired of waiting on Santa Fe.

“This state and its elected leaders have done nothing to move our state forward except talk in Santa Fe,” Block said.

The commission hearing itself was already lengthy before the commissioners even brought up right-to-work. Discussions on an update to the county’s Open Meetings Act and sending a controversial oil and gas drilling ordinance back to the county’s Planning and Zoning Commission and other business took more than three hours, before the right-to-work ordinance could even be raised.

Supporters of right-to-work have said other counties will follow suit, though none have introduced proposals to do so as of yet.

Correction: This story said Matt Patterson was a senior fellow with the Competitive Enterprise Institute’s Center for Economic Freedom. He has not been for some years, according to CEI.