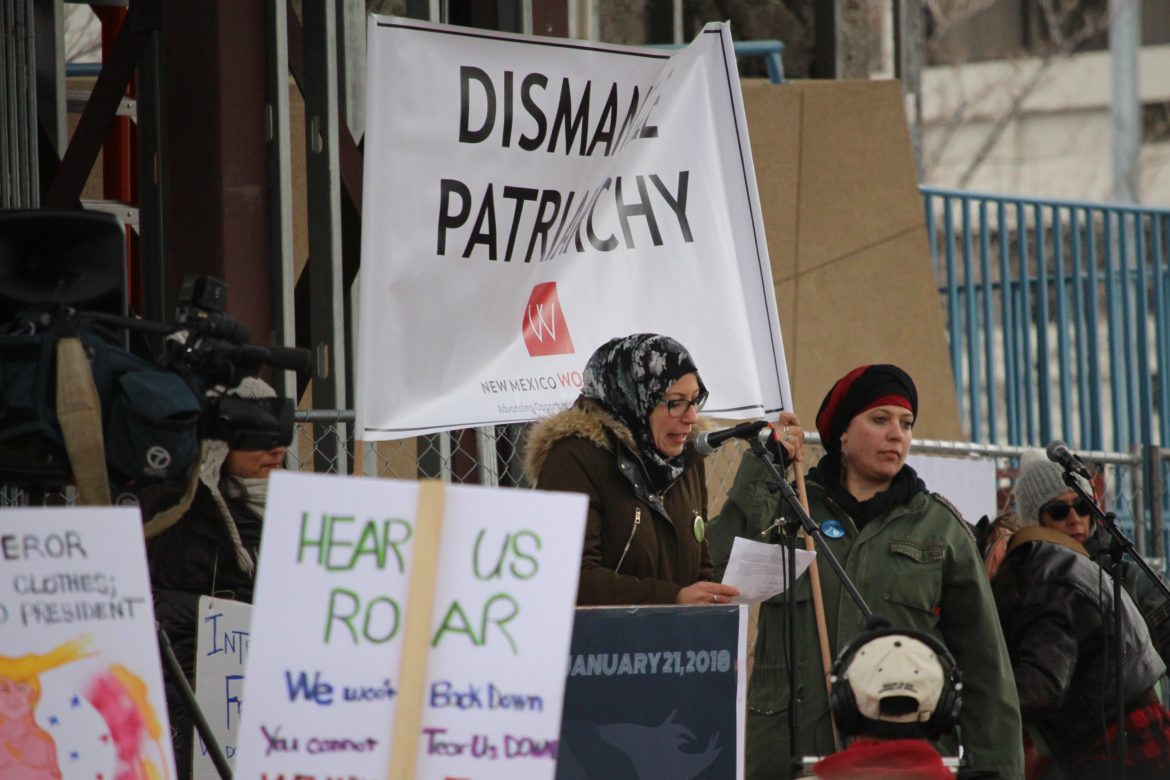 On Sunday morning, with snow in the Sandias and temperatures in the 30s, thousands of people converged on Civic Plaza in Albuquerque for the Women’s March.

The crowd may have been smaller than in January 2017, the day after President Donald Trump’s inauguration, but it was no less defiant of the president’s policies. Speakers called out in support of the #MeToo movement and equality for LGBTQ communities. They rallied to fight racism and economic inequality and reaffirmed the rights of Indigenous women. Many spoke about the pervasive nationwide fear that DREAMers, who had been protected under the Deferred Action for Childhood Arrivals program, or DACA, will be deported. And they called for justice in the murders of eleven women found in a mass grave on the West Mesa of Albuquerque in 2009.

Adriann Barboa, with Strong Families New Mexico, said women need to be guaranteed economic choices, including though initiatives like paid sick leave. Diana Dorn Jones, executive director of the South Broadway Corporation, advocated for education and housing justice. “Housing is one way we pass wealth to the next generation, giving them a step up,” Dorn Jones said, adding that to generate wealth, workers must be paid a living wage. “Not just minimum wage, but a job with benefits, where you can take care of your family.”

Poverty affects everyone, she said, and it “attacks your humanity.”

Monique Salhab, an Army veteran who served two tours in Iraq and now works with Veterans For Peace said she learned during her ten years of military service how destructive the institution is—throughout the world, the U.S., and here in New Mexico.

“What the military represents to women, in service and throughout the world, is violence, consumption, rape,” she said, adding that those problems transfer into society as well. But young people have a choice, she said.

Other speakers at the rally included City Councilor Debbie Gibson and Albuquerque’s first lady, Elizabeth Kistin Keller. To cheers from the crowd, Kistin Keller said Albuquerque needs more than a new mayor—it needs a mission and a movement. She introduced Keller’s chief administrative officer, Sarita Nair, the first woman to hold that job in the city’s history. Nair noted that during the 2017 mayoral election, crime was a centerpiece issue, but that public safety is a different issue for women. She called for the day when women can walk anywhere in Albuquerque, at any time of day or night, and feel safe.

Kay Bounkeua, executive director of the New Mexico Asian Family Center, said that by categorizing Asian immigrants as a “model minority,” American society has used them as a “wedge.”

“The system is playing us against each other,” she said. But that will not happen anymore. “We are organizing, we are mobilizing, we are turning out to the polls,” she said. “Our struggles of oppression are connected, and the liberation of one is liberation for us all.”

Other speakers included Peaches Blackbird (Oglala Sioux/Pueblo of Zia) of Power Through Peace and Ingrid Ordonez, a board member of the Southwest Organizing Project and seventh grade special education teacher. Ordonez came to the U.S. with her family from Chihuahua in 2007. Her father, a police officer, refused to cooperate with the cartels, she explained, and they fled to the U.S. just one month after the cutoff for DACA.

Roberta Rael, founder and director of Generation Justice, began by singing a few lines from the freedom ride gospel song, “Woke up this morning (with my mind stayed on freedom).”

But there is a way to win the battle, she said. And that’s through love, and through community.

We also asked readers to share their photos with us on Twitter. Here are some of those:

🖤 Socorro. We’ve got bagpipes, we’ve got banjos, we’ve got science and explosives and we’ve got fellowship 🖤 I’m speaking at 3.30!🌵👽🌵 pic.twitter.com/WWS0QbUcUu

Heading to #SantaFe march in the snow today!

Here’s our pack of girls, excited for the #womensmarch2018 in #Abq! pic.twitter.com/Olm86wNyb3

We march for social justice and equality, to protect our rights, to encourage political engagement, and to speak up for those who remain unjustly silenced or oppressed. #WomensMarch #equality #justice #vote #fightforyourrights pic.twitter.com/krikFOvyZa

The Comeback is always Stronger than the Setback. #WomensMarch2018 #Albuquerque #PowerToThePolls pic.twitter.com/CismLk3D8y