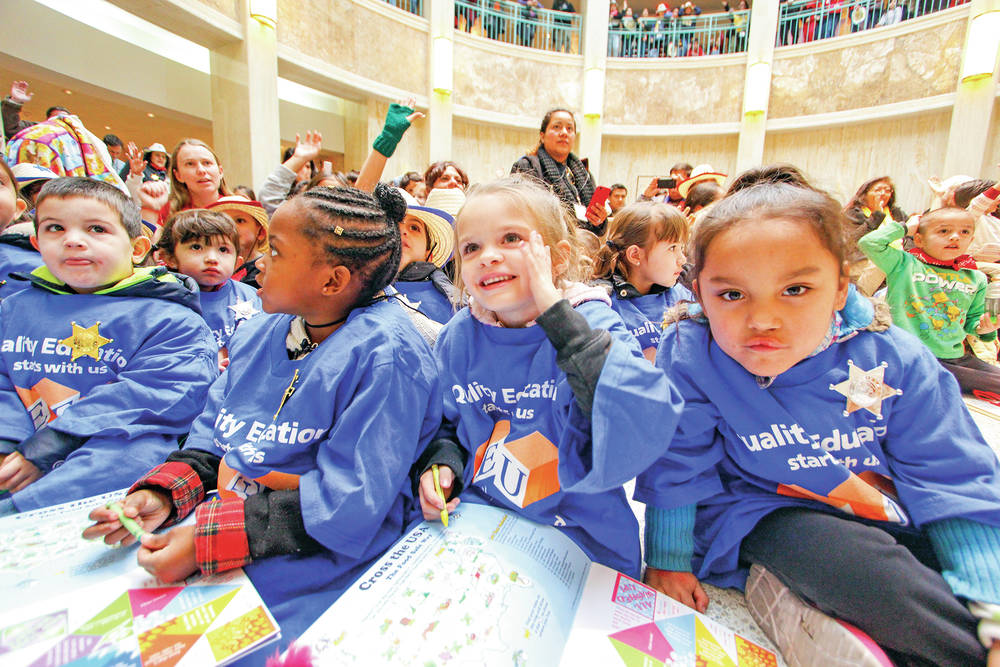 Children from the Joyas Del Futuro child care in Albuquerque sit in the Rotunda during last week's 1,000 Kid March.

As one of the tour guides at the New Mexico state Capitol, Dolores Esquibel loves to show off every corner of a building that has, well, no corners.

For years, the Española resident has led dozens of visitors through the dizzying maze of hallways and corridors that make up the four floors of the half-century-old Roundhouse. But when lawmakers are in session, her tour is unlikely to include much time in the Rotunda, the open and circular center of the Roundhouse that rises all the way to the governor’s office on the fourth floor.

“We usually bring them up here because we can’t do anything downstairs — they’re always having something, some kind of a function,” Esquibel said recently, peering down at the airy and busy Rotunda from the third floor.

“Every day during the Legislature, there’s something going on,” she said. “It’s the heart of the building.”

Always beating with activity and pounding with noise during the session, the Rotunda is the Grand Central Station of New Mexico. It’s part marketing platform, part billboard, part concert hall, part (political) theater. Once described by a lawmaker as the Capitol’s living room, the Rotunda is where people go to perform, make major announcements, rub elbows with politicians, pitch an initiative, make a scene or simply be seen.

A crowd in the Rotunda disperses Wednesday following a news conference announcing the passage of a nursing compact that will allow nurses from out of state to practice in New Mexico without receiving a license in the state.

But if you want time — prime time — you may have to stand in line.

Booking a coveted spot in the Rotunda, or in one of 24 exhibit spaces in the adjoining Halls of History during a legislative session, is fierce competition. Requests pour in the moment the application period begins in September.

“On Tuesday after the [Labor Day] holiday, I begin receiving applications at 12:01 a.m.,” said Anna Anaya, an office administrator who is in charge of booking the Rotunda and the Halls of History.

“I come into work at 7 and people are actually, as soon as the doors open, are standing here with their applications,” she said. “My fax machine, plus everything on my email, is blowing up.”

Anaya may have one of the most interesting, if not harrowing, jobs in the Roundhouse. Getting a spot in the Rotunda is serious business for special interest groups, performing groups … almost anyone who needs to be noticed. Many consider a spot there a critical part of their ability to making a point to legislators or even the governor.

“On this 30-day [legislative session], I probably turned away 30, if not more, groups,” she said Thursday. “And I still have them calling. I had a lady today call me who wanted a table for Rudolfo Anaya’s reading book. I told her, ‘I can’t. I don’t have any place to put you.’ She says, ‘Anywhere?’ And I said, ‘No, all I can book is here, and everything is booked.'”

Anaya, who must sift through the many requests on a first-come, first-served basis, said she’s had only one serious problem with the scheduling, which happened after she booked an anti-abortion group after an abortion-rights group.

“I had them in their faces with placards and signs,” she said.

“That was my only snafu in all my years, right?” she asked her boss, laughing.

Anaya said she schedules entertainment only during the lunch hour.

“We are a working Capitol,” she said. “There’s some times, though, that I can’t go out there and stop them from singing halfway through a song, so I just got to let it go. But it works out for the best.”

The Rotunda, though, will never be confused for The Santa Fe Opera. A vertical and veritable echo chamber, it has terrible acoustics.

“Even with amplification, it doesn’t necessarily help you because you get a lot of echo,” said Chris Chaffin, media director for the New Mexico chapter of the Alzheimer’s Association, which booked the Rotunda for an hour Thursday.

“This might be a funny story: We used to do a moment of silence, but we don’t do it anymore because when we would stop talking for a moment, all you could hear was cacophony echoing throughout the halls. It’s not ideally suited for acoustics, but it is very suited for reaching people.”

State police working at the Capitol for the legislative session prepare their uniforms before a group photo is taken Thursday in the Rotunda.

There are rules for reaching people.

“There’s no vending in the building, no candles, no balloons, no cooking,” Anaya said. “Well, no cooking, per se. We’ve had people out there with coffee and cookies, but you can’t bring a barbecue grill in here.”

Such parameters don’t scare off many. Chaffin said the Alzheimer’s Association wastes no time in trying to schedule a time in the Rotunda every year.

“Not to give our secrets away, but we try to book it early every year,” he said. “We have developed relationships with the people here because it is a very valuable way to meet the public. To me, what the state Capitol represents is this old idea of democracy from ancient Greece where people come in, they hear what’s important that’s going on in the world. It’s the center of government, literally.”

Predictably, perhaps, lawmakers and officials understand the importance of the Rotunda to those who battle to find a spot — in part, because they want a place there as well. New Mexico State Treasurer Tim Eichenberg calls it the epicenter of the Capitol.

“This is where ideas are expressed, absorbed,” he said.

Eichenberg and his staff were able to squeeze into the schedule this week to announce the launch of a new investment and savings account program known as ABLE New Mexico, which allows residents living with disabilities to save and invest their money without risking eligibility of their benefits.

Eichenberg said he sought the Rotunda partly to try to get Republican Gov. Susana Martinez, who cares for her disabled sister, to attend his news conference.

“I’m just disappointed that the governor didn’t bless us with her [presence] because that would’ve brought Channel 7 down here,” grumbled Eichenberg, a Democrat.

Aesthetically, the Rotunda is as beautiful as it is well-traveled. It’s finished with travertine marble that Esquibel, the tour guide, said was brought into Santa Fe from a quarry near Belen. The floor is inlaid with a brass and turquoise mosaic of the seal of New Mexico, which is encased in the Zia symbol. Turquoise is the official state gem, and the Zia symbol is emblazoned on the state flag.

According to santafe.org, the ceiling skylight of blue and pale pink stained glass is patterned after a Native American basket weave that symbolizes the sky and the earth.

Sen. Carlos Cisneros, D-Taos, said the Rotunda has sentimental value for him because it is where some of his colleagues who have passed away have been memorialized.

“In times of sorrow and recognition of death of a member [of the Legislature], we celebrate that in the Rotunda,” he said. “It’s a place to eulogize, as well as to remember our fellow legislators.”

Chaffin said the Rotunda offers everyone, from lawmakers and nonprofits to the general public, a platform to express themselves — a place to be heard, even if hearing isn’t all that easy.

“When we finish, there’s people waiting to come on,” he said. “That goes all through the session. But everybody has the same idea: come out, connect with the public, hopefully connect with the media, although there’s a lot of competition for that as well. But it’s this link between the public, the lawmakers and then us, the nonprofits and the organizations that need to coordinate between the two. It’s that link between the people and the government and then everyone that serves them.”