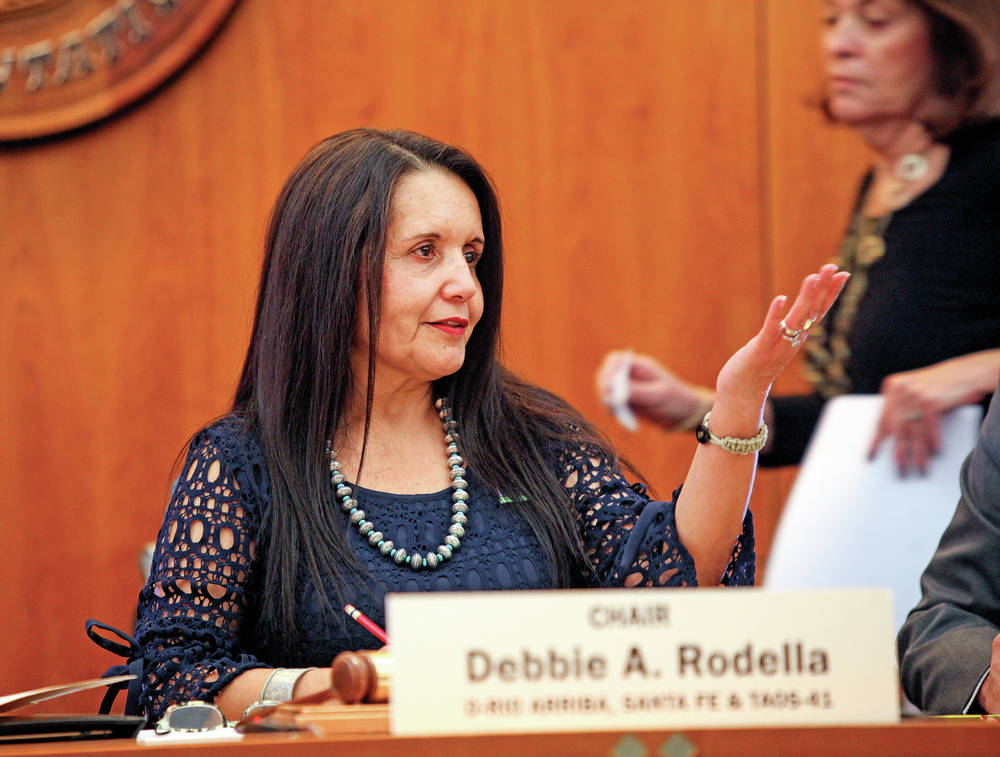 Longtime state Rep. Debbie Rodella, shown during a House Business and Industry Committee meeting Wednesday, is facing competition in the Democratic primary election this year. Susan Herrera, the former CEO of the Los Alamos National Laboratory Foundation and director of the Congressional Hispanic Caucus, announced Wednesday she is running for the seat in House District 41.

State Rep. Debbie Rodella has competition for the Democratic nomination for a seat representing Española and a swath of Northern New Mexico where she has been a political force for decades.

Susan Herrera, the former CEO of the Los Alamos National Laboratory Foundation and former director of the Congressional Hispanic Caucus, announced Wednesday she is running for the seat in House District 41.

The announcement is a challenge to Rodella, the second-longest-serving member of the House of Representatives, who, in 25 years, has developed a reputation as a conservative Democrat and seasoned legislator.

“I think we need a more progressive Democratic Party at the state Legislature,” Herrera said Wednesday. “… We need to bring the issues of working people to the Legislature.”

A resident of Embudo, Herrera has long been involved in politics and government. Her father, a native New Mexican, moved to California after World War II and served three terms on the Pomona City Council. Herrera worked on the campaign and legislative staff of U.S. Rep. Jim Lloyd of California.

Moving to Española in 1990, she helped found The University of New Mexico’s Taos campus. She also worked for UNM at what was then Northern New Mexico Community College to develop a baccalaureate student nursing program in the north.

Herrera sits on the board of the advocacy group New Mexico Voices for Children and the boards of the Family Learning Center in Española and the Northwest First Born Program in Farmington and Gallup.

Contending that relying on oil and gas to prop up the state budget is unsustainable, Herrera says legislators can create a strong revenue stream for education, health and economic development by revamping the income tax, permanent fund and gross receipts tax.

Herrera’s announcement comes amid what seems to be a wave of progressive Democrats — all women — running for House seats in deep-blue but old-school Northern New Mexico.

Rep. Nick Salazar, D-Ohkay Owingeh, is retiring from the Legislature after 46 years, and longtime acequia association leader Paula García is among the candidates running for his seat. One district over, Andrea Romero, the head of the Regional Coalition of LANL Communities, is challenging Rep. Carl Trujillo, D-Santa Fe.

Rodella, who has represented House District 41 since 1993, said Wednesday she will seek re-election. She has not had a primary election challenge since 2006, when she fended off Moises Morales, winning by about 140 votes of 4,386 cast.

Rodella chairs the Business and Industry Committee and has irked some in her party’s left wing. For example, she backed industry-supported legislation last year on payday lending and solar energy.

Rodella’s district is reliably Democratic but sprawls from Española to the western end of Taos County, out to Tierra Amarilla and Chama.

The primary election is June 6.