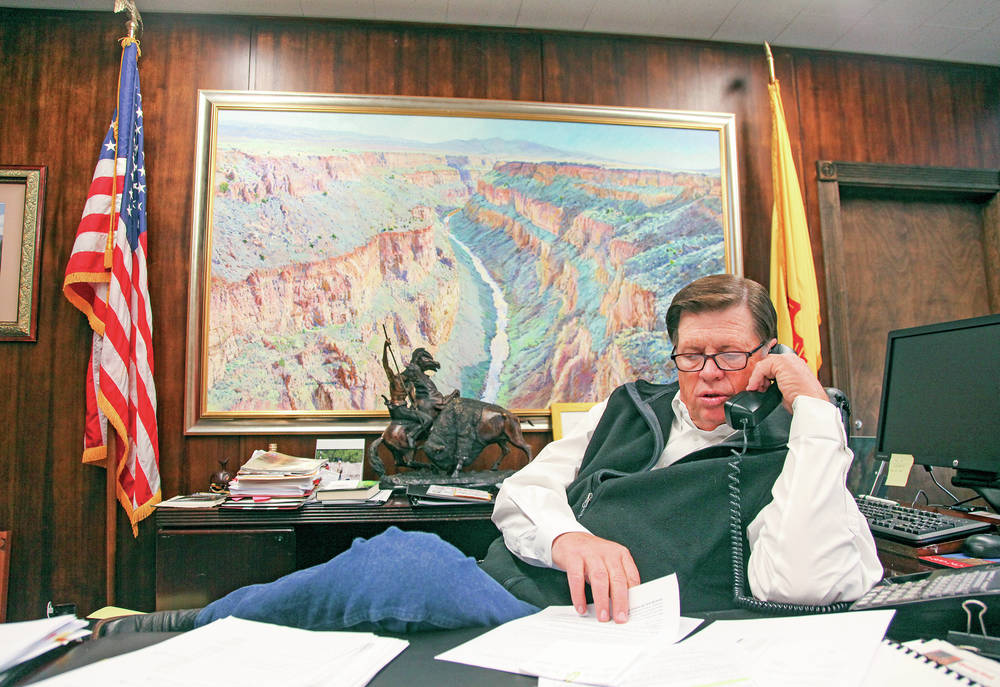 State Land Commissioner Aubrey Dunn takes a call last month while going through oil and gas lease assignments in his office. Dunn, one of New Mexico's top elected Republicans, has switched parties and registered to vote as a Libertarian.

State Land Commissioner Aubrey Dunn, one of New Mexico’s top elected Republicans, has switched parties and registered to vote as a Libertarian.

Dunn said Saturday he is considering his next political move as his term comes to an end later this year. Some Libertarians have launched a campaign to draft him as their candidate for the U.S. Senate.

Regardless of his next steps, Dunn’s departure from the GOP means Republicans now hold one less statewide elected office. And it comes as the party grapples with factional battles as well its very identity in a purple state during the age of President Donald Trump.

Dunn’s move, though unusual, is hardly a surprise. A rancher and banker from Southern New Mexico, he has long been at odds with Republican Gov. Susana Martinez.

He has clashed, too, with some oil companies and generally developed a reputation as the sort of libertarian-leaning Republican that can be a rare breed in the party.

“I was on the outside,” Dunn said of his decision to switch parties.

But he also has been one of the few Republicans to win a statewide election in recent years.

Dunn won elected office for the first time in 2014, ousting Democrat Ray Powell as land commissioner in a race so narrow it prompted a recount.

The job involves managing about 13 million mineral acres along with 9 million surface acres of state trust land that generates hundreds of millions of dollars annually for New Mexico’s education system.

Under Dunn, the office has avoided scandal. He has rankled some oil companies, however, by imposing restrictions on pumping fresh water over the Ogallala Aquifer. And he has scrapped with Martinez over management of the State Investment Council.

Still, none of that would necessarily seem like a disadvantage heading into an election year in which even he expects an anti-Trump backlash.

Shortly after U.S. Rep. Steve Pearce announced over the summer that he would run for governor, Dunn launched a campaign for Pearce’s congressional seat.

But Dunn withdrew from the race, describing an increasingly crowded field divided between rival sections of the state party.

Since then, Dunn has been in political limbo as the 2018 election takes shape.

Dunn’s son, A. Blair Dunn, is running for attorney general as a Libertarian and has undertaken a campaign of sorts to get his father into the race for U.S. Senate.

Democrat Martin Heinrich is running for re-election to the Senate. The only Republican candidate is Albuquerque businessman Mick Rich.

It would be an unprecedented win for Libertarians. But the party has access to the ballot this year.

Former Republican Gov. Gary Johnson ran for president as a Libertarian in 2016 and received about 9 percent of the vote in New Mexico.

That was a strong enough finish to win Libertarians a designation as a major party in the state, ostensibly making it easier for its candidates to get on the ballot.

Libertarians still only constitute around 1 percent of New Mexico’s registered voters — about 7,260 people as of November 2017, according to the Secretary of State’s Office.

Whether or not a Libertarian could win, Dunn could still shake up the race.

The filing deadline for federal or statewide candidates is Feb. 6.