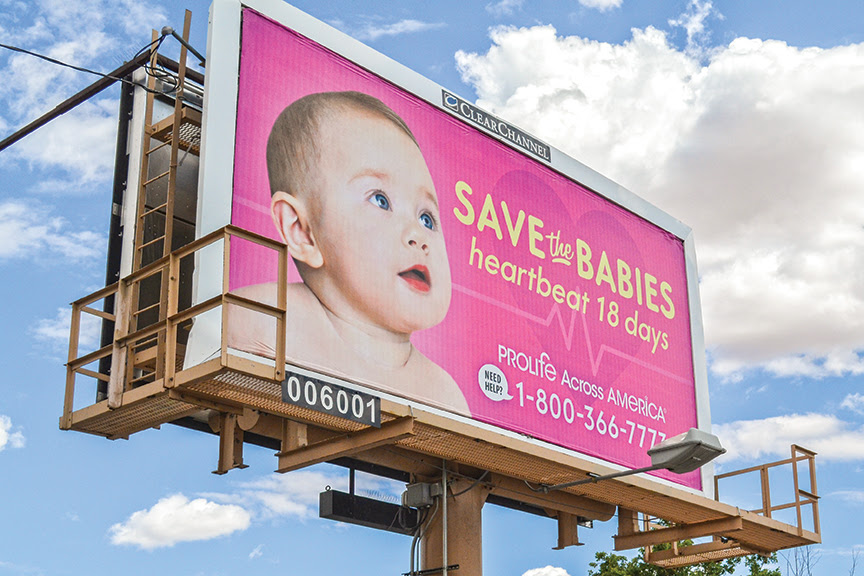 A billboard reminds drivers where the anti-abortion group Prolife Across America stands.

This week in the Legislature may see some debate regarding abortions and whether or not doctors should have a role in family discussions.

Earlier this month, Gov. Susana Martinez outlined her legislative priorities in her State of the State address. In addition to  presenting her six-point-plan to bolster the state’s economy, she also called for legislators to tackle certain issues during the 30-day legislative session. She encouraged them to pass bills related to education reform and expanded criminal penalties. Legislators have introduced a handful of bills related to abortion, but she skirted the issue in her speech.

But last week Martinez signaled lawmakers to change state law and require parental notification for minors seeking to terminate a  pregnancy. Further, medical providers who fail to notify parents of pregnant minors requesting an abortion could face a monetary fine and be stripped of their medical license.

Her executive message greenlighted  a Republican-sponsored bill in the House that would  require facilities or practitioners to first notify a parent, by certified mail or in person, that their daughter is pregnant and seeking an abortion, with some exceptions.

With almost 15 days left in the session the bill still needs to get through three House committees and the body as a whole, in addition to the Senate. But the broad  impact of the bill raises  concerns among many, including  the American Civil Liberties Union of New Mexico.

Erin Armstrong, a reproductive rights attorney with the New Mexico ACLU, told NM Political Report said HB 56 actually aims to govern what kind of relationships young women have with their parents or legal guardians. She pointed to a policy statement by the American Academy of Pediatrics (AAP) discouraging laws requiring notification. AAP wrote that many teens already do talk to their parents about pregnancy decisions. But, the statement said, prolonging a procedure could cause more harm than good.

None of the three sponsors of the bill, Reps. Rick Little, David Gallegos and Rod Montoya, nor a spokeswoman for House Republicans responded to requests for an interview.

The bill has some exceptions like providing pregnant minors a judicial avenue to opt out of the notification process. In that case the young woman  would file a petition in a state district court requesting a confidential hearing with a judge. The judge would then determine “if the minor is sufficiently mature and well enough informed to decide intelligently whether to have an abortion” or if parental notification “would not be in the best interests of the minor.” The court would also presume, according to the bill, that cases of incest, sexual assault or rape would qualify as reasons to not notify parents or guardians.

Armstrong called the proposed legal process “burdensome and complicated” for anyone, but especially teens who lack a trustworthy relationship with their parents or teens who are victims of rape or incest.

“All of this serves to delay a time sensitive medical need,” Armstrong said.

The bill also makes an exception  if the pregnant minor informs the medical practitioner the pregnancy is a result of sexual assault, rape or incest. But that determination would need to come from questions and consultation procedures approved by the state’s Children Youth and Families Department.

Armstrong said many minors already consult with their parents before terminating a pregnancy and that “the very few who can’t talk to a trusted adult need access to safe, quality medical providers and it’s just bad policy to shut them off from that.”

The Martinez administration has publicly declared it is “pro-life” but the governor does not outwardly advocate one way or the other, besides allowing issues like parental consent in 30-day legislative budget sessions.

A spokesman for Martinez did not reply to NM Political Report regarding the governor’s message.

House Bill 16, sponsored by Las Cruces Democrats Rep. Joanne Ferrary and Sen. Bill Soules would repeal a pre-Roe v. Wade state law that classifies an abortion as a felony. If the U.S. Supreme Court were to ever repeal the notable case, the state law would stand, effectively eliminating the question whether state or federal law takes precedence.

“The fact that this parental notification bill has a message on it [and HB 16 does not], calls into question of the priorities of the governor,” Marshall Martinez said.

House Bill 56, or the Parental Notification Act, would technically repeal the decades old abortion law but replace it with the notification requirements.

Adriann Barboa, the field director of advocacy group Strong Families United and mother to a 17-year-old-girl, said she has gone out of her way to encourage her kids to tell her anything. But Barboa said, she also knows they may not take her advice.

“There are some times when young people are not going to turn to their parents because of fear or shame or lack of trust,” Barboa said.

Barboa said she tries to offer close friends and family members to her children as an alternative. But, Barboa said, not all families have an honest and open line of communication and it’s not the Legislature or Gov. Martinez’s job to get involved.

“I don’t think there’s any kind of legislation that can force that relationship,” Barboa said.

The first stop for HB 56 is the House Consumer and Public Affairs Committee, but Chair Eliseo Alcon has yet to schedule it.