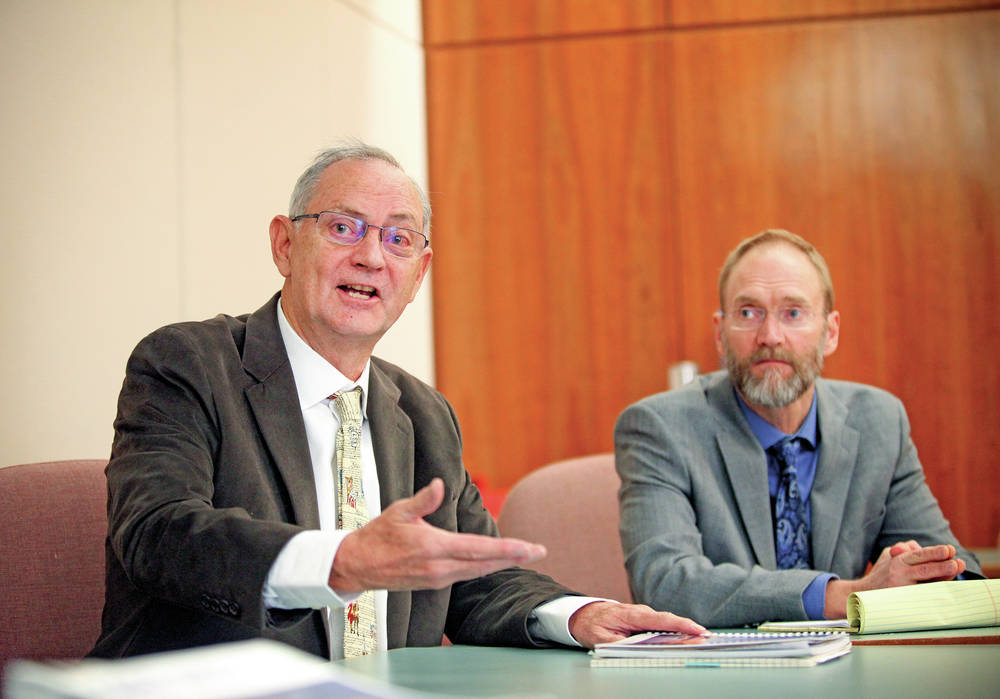 Former Santa Fe Mayor David Coss has not had a valid driver’s license since August, though not for lack of effort in attempting to renew it.

Coss says he made four separate but unsuccessful trips to a Motor Vehicle Division office to try to obtain a state driver’s authorization card. Employees of the MVD rejected his application on grounds that Coss says were illegal, leading him to become the lead plaintiff in a class-action lawsuit filed Monday against Gov. Susana Martinez’s administration.

Coss says the MVD staff told him he had to supply an identifying document — his Social Security card — that is not required under New Mexico law to receive a driver’s authorization card.

Worse still, he says, the MVD staff readily recognized him as the city’s former mayor, but then said he would have to be fingerprinted if he revives his attempt to obtain the card for driving privileges. The MVD told him fingerprinting is now necessary because his old license has expired.

Long past the point of frustration, Democrat Coss placed his name first on the suit against the Republican Martinez’s administration. Six other individuals, the New Mexico Coalition to End Homelessness and the immigrant advocacy group Somos Un Pueblo Unido also are plaintiffs in the suit, filed in state District Court in Santa Fe.

They claim Martinez’s Motor Vehicle Division has stopped applicants from obtaining driver’s authorization cards and non-Real ID identification cards even though they met all requirements of a law that legislators approved and Martinez signed in 2016.

Ben Cloutier, a spokesman for the Martinez administration, had a tart response to the suit.

“This is the latest in their long line of political stunts,” he said.

Cloutier said the suit is based on a handful of isolated examples when the MVD has issued 35,000 driver’s authorization cards and 527,000 driver’s licenses that comply with the federal Real ID Act.

Under the 2016 law, New Mexico has a dual system for granting driving privileges.

Those who want a driver’s license that complies with the Real ID Act must have citizenship or proof of lawful immigration status.

People without proof of immigration status and others who do not want to be listed in the Real ID database can apply for a driver’s authorization card. The card might not be valid as identification for air travel or entering a federal building.

Coss, who was mayor from 2006 to 2014, had held a New Mexico driver’s license since 1970. He decided against being included in the Real ID system, but tried to obtain a driver’s authorization card a few weeks before his old driver’s license expired.

“I’m the primary child care provider to my toddler grandchildren, and I drive them around town,” Coss said. “I’m also the guardian of my 86-year-old father, who suffered a stroke last year. I need my license to carry out my daily responsibilities.”

Coss described dealing with the MVD as a nightmare, and said he knows he is not the only qualified applicant who has been rebuffed in trying to get a driver’s authorization card.

He first went to the MVD office with his passport and his then-current driver’s license to establish proof of his identity. He said he was turned away because he did not have proof of residency, other than the address listed on his driver’s license.

After Coss returned with documents proving that he lived in Santa Fe, the MVD staff said he had to provide a Social Security card, according to the lawsuit.

Attorneys for those suing said a Social Security number and card are not required under state law to obtain a driver’s authorization card. The suit also claims that MVD employees failed to advise Coss that he had a right to appeal the adverse decision or to inform him of how the appeals process works.

Two of the other listed plaintiffs in the lawsuit are from Santa Fe and three are from Albuquerque.

Reyna Carmona Pérez said MVD staff denied her a driver’s authorization card, telling her she had to correct a 17-year-old arrest record that transposed her first and middle names.

Also suing is an 87-year-old woman who said her middle name was spelled differently on her birth certificate than on her Social Security card, leading MVD to reject her attempt to renew her driver’s license.

Another plaintiff is a homeless man who says his identification card was stolen in 2012. He said an MVD clerk told him he needed a birth certificate to replace the card. Lawyers for the plaintiffs say the law contains no such requirement.