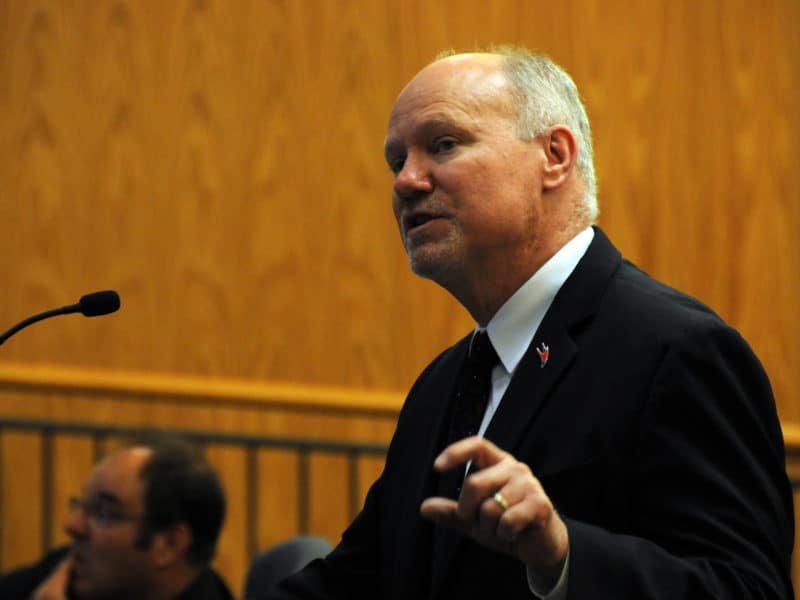 A bill that would let state officials keep all information about Spaceport America’s customers secret is scheduled for its first hearing Tuesday, but it faces a difficult road to approval this session.

This year’s legislation, Senate Bill 98, is expansive. In addition to shielding companies’ technology and flight schedules from public disclosure, it would allow officials to hide rent payments and even the identities of private or government customers — unless a customer informs the spaceport that it can release some of that information. The need for such secrecy exists, some say, because the commercial space industry, which is valued at hundreds of billions of dollars, is hyper-competitive.

This story originally appeared at NMPolitics.net.

Gov. Susana Martinez’s office has ignored multiple requests from NMPolitics.net to comment on the legislation, but her chief of staff was quoted by the Albuquerque Journal as saying Martinez supports it. The bill is co-sponsored by Sens. Bill Burt, R-Alamogordo, and Mary Kay Papen, D-Las Cruces. Papen has gone back and forth in the past year about how much secrecy the spaceport should be allowed.

The Senate Public Affairs Committee is scheduled to consider the bill on Tuesday. It would also need approval of a second committee before it could be voted on by the full Senate. There’s no companion legislation making its way through the House to speed things up — so even if the Senate approves the bill, it would need to start over and move through the same process in the other chamber before the session ends at noon on Feb. 15.

Approval of the controversial legislation won’t come without time-consuming deliberation. Lt. Gov. John Sanchez said he expects the “broad language” in the bill to be amended. Sanchez, a non-voting member of the spaceport’s governing board and a member of the national Aerospace States Association board, breaks with his fellow Republican Martinez on this issue. He doesn’t support keeping customers’ rent payments secret.

“New Mexico taxpayers deserve to be informed as to how Spaceport America is performing even while we protect the sensitive details of the tenant’s business,” Sanchez said.

The debate over how much secrecy to allow at Spaceport America reveals the tension created by the public/private partnership. Greater secrecy might help attract commercial space companies and the good-paying jobs they could bring. But transparency, particularly with rent and fee payments, helps the public evaluate its investment in the spaceport and builds public trust that is key to winning the government funding the spaceport also needs.

This year’s legislative debate comes a decade after voters in Doña Ana and Sierra counties approved tax increases to help fund construction of the spaceport in the desert east of Truth or Consequences. The spaceport’s primary tenant, Virgin Galactic, has promised good news this year for a state that invested more than $220 million in the facility: After years of delays and two fatal accidents, it’s nearly ready to move 85-90 employees from Mojave, Calif. to Las Cruces. The company says its long-awaited launches of paying customers into suborbital space from New Mexico could begin later this year.

The legislation also comes months after NMPolitics.net examined the spaceport’s status in an investigative series and drew two conclusions:

-The spaceport is having an economic impact in New Mexico, but how significant an impact isn’t clear.

-The spaceport is plagued by transparency problems and there’s a real debate about how much secrecy the facility and its customers need.

This is the second time Papen has sponsored legislation to give the spaceport greater secrecy. One committee approved her bill last year, but then it died. Peter St. Cyr, executive director of the N.M. Foundation for Open Government, said the legislation should die again.

“It’s disappointing to see public servants put the confidentiality interests of private businesses ahead of the public’s right to know,” he said.

NMPolitics.net has also filed complaints with the AG alleging that the spaceport is illegally withholding information from the public. Spokesman James Hallinan said the AG’s office hopes to issue a determination on NMPolitics.net’s complaints before the legislative session ends.

How much secrecy is necessary?

The global space economy was estimated at $330 billion in 2014, and the industry is extremely competitive. Companies that operate at publicly owned facilities are demanding secrecy for trade secrets, such as technology and flight schedules.

Some are also demanding secrecy for information like rent payments — but not all. Virgin Galactic’s lease agreement with Spaceport America has been public for years. The company shared with NMPolitics.net last year that it had paid $7.1 million in rent and user fees to the state for its use of a hangar and other facilities at Spaceport America, and that it had spent another $9.4 million with New Mexico business on construction and other things.

While many are amenable to a law that protects spaceport customer’s proprietary information, St. Cyr said there’s a big difference between technology that space companies own and money they owe the state.

“Trade secrets have nothing to do with the rate they pay the spaceport,” he said. “…It doesn’t take a rocket scientist to realize lease payment amounts are owed and not owned.”

For Papen, the issue is complex. After sponsoring last year’s secrecy legislation, she later told NMPolitics.net she thought the public should be able to know how much spaceport customers were paying in rent and fees. She said she wouldn’t sponsor legislation this year to keep that information secret.

“If our Doña Ana County taxes are going for the upkeep and support for the spaceport, then I think how much private money we’re collecting certainly is within the realm of what the public should be able to know,” Papen said last summer.

But she’s changed her mind again.

“I mean, we’ve got so much money invested in that,” Papen said last week. “Somehow or other we need to try and make that a success.”

Virginia has a law that allows total secrecy for customers at its spaceport if disclosure would “adversely affect the financial interest or bargaining position of the state agency.”

Florida’s trade-secrets law lets its space agency withhold rent information “if there’s a compelling reason,” Dale Ketcham, Space Florida’s chief of strategic alliances, told NMPolitics.net last year. But that law doesn’t apply to rent payments, an open government advocate in that state asserted. She said using the law to shield rent payments, if it ever happened, would be challenged in court.

In New Mexico, where some citizens doubt the spaceport will provide the return they hoped for on their investment, there’s been lots of debate about how much secrecy to give the spaceport in an attempt to attract high-dollar customers.

Virgin Galactic took no position on Papen’s bill last year. While the company needs some secrecy, Jonathan Firth, its executive vice president for spaceport and program development, told NMPolitics.net that not everything about the company’s relationship with Spaceport America needs to be shielded from the public.

Papen acknowledged the tension between attracting customers and being transparent with the public. She said she’s open to amendments to the bill.

The spaceport’s CEO, Dan Hicks, has insisted his agency needs a law like Virginia’s. He was quoted recently by the Las Cruces Sun-News as saying he’s optimistic the spaceport will get such a law this year.

“I feel very confident,” Hicks said. “Anybody who looks at how it’s crafted and what it’s intended to do will say, that makes total sense.”