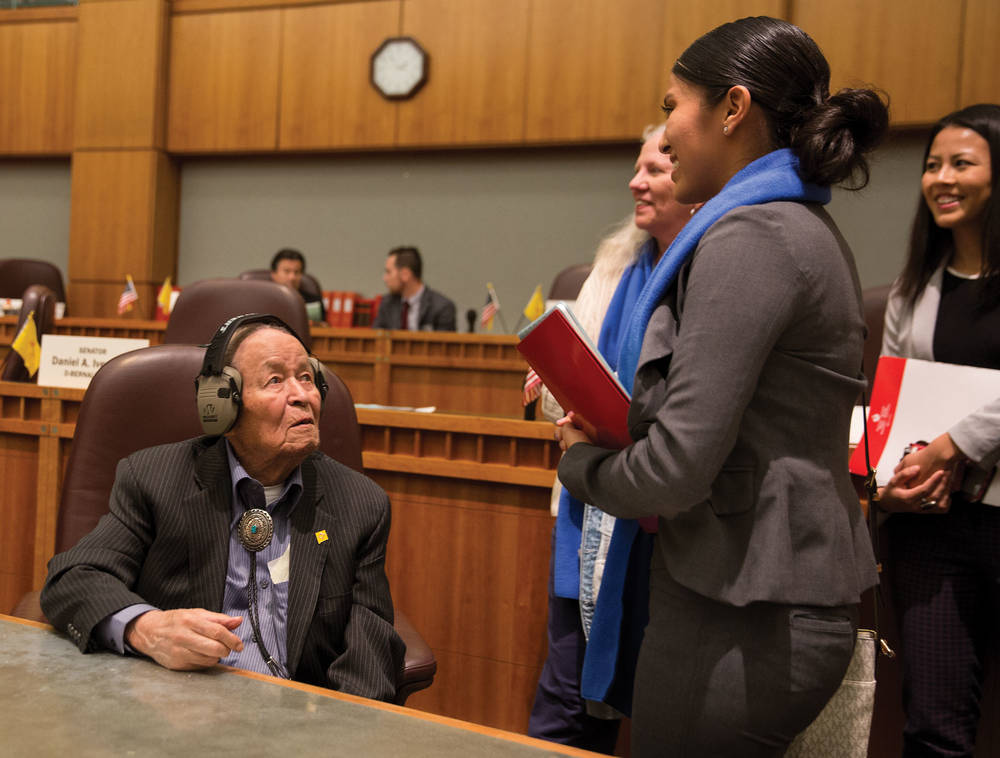 State Sen. John Pinto, one of the few living Navajo Code Talkers who served in World War II, has introduced a measure that would allocate $1 million for the construction of a museum and veterans center to honor the Code Talkers. Pinto is shown Monday speaking with Kaitlyn Gibson of the American Cancer Society.

The Navajo Code Talkers were not so much the silent warriors of World War II as they were the indecipherable heroes of the Japanese theater of combat.

The Code Talkers, many of whom were from New Mexico, used their native language to confound the Japanese in planning battles, calling for reinforcements and transmitting requests for food, ammunition or medicine.

Many military historians credit them with helping to win the war.

“Were it not for the Navajos, the Marines would have never taken Iwo Jima,” Marine Maj. Howard Connor once said of a famous and pivotal battle. He served as a signal officer for the Marines’ Code Talker unit during the Iwo Jima campaign.

On Tuesday, he moved one small step closer to that goal after the Senate Indian and Cultural Affairs Committee unanimously voted for a bill asking the Legislature to allocate $1 million to build a Navajo Code Talkers museum and veterans center in New Mexico, near the Arizona border.

Pinto, sponsor of the bill, presented it by facing an assembly of some 25 people, many of them Native Americans. Then the senator, who estimates he is 93 years old, recounted with quiet emotion the contribution Navajos made to winning the war.

His head bowed, his hands clasped together as in prayer, Pinto spoke of the Japanese aerial attack on Pearl Harbor that led to America’s entry into the war, and of the 2,335 U.S. servicemen killed in that attack.

“I hope it never happens again,” he said.

He then recounted how Navajos were recruited to join the Marines as a special unit of Code Talkers who would use their native language to confuse the enemy’s cryptography experts.

The Navajo Diné language, which few non-Navajos understood, was unwritten. Code strategists devised a 200-plus word code from it.

Many Code Talkers, who also took part in combat missions, died overseas and are buried far from their native land, Pinto said.

Still, building a museum in honor of Code Talkers will not be easy.

But the $1 million that New Mexico would invest in the planned museum is just one source of funding, said Mark Freeland, a spokesman for the Navajo Nation. He said the nonprofit Navajo Code Talkers Foundation is also raising money for the project.

The 140-acre property designated for the museum was donated to the Navajo Code Talkers Foundation by the Chevron Mining company, Freeland told the committee.

Carmen Moffett of Gallup told the committee that her father, Newton Moffett, served with the Army during World War II. She opening the museum “would be a historic moment.”

“I would like, in my lifetime, to see something like this happen,” she said. “If not, then in the lifetime of my son.”

Her son, Del Norte Elementary School fifth-grader Hunter Whitehair of Gallup, said the museum could be an important destination for school field trips so children “can learn about our culture and not forget about our contributions to the war.”

Some senators on the committee asked Pinto and Freeman if the museum would include information on code talkers from other tribes and nations, including Comanches. Freeman said that is a possibility.

The bill next goes to the Senate Finance Committee.