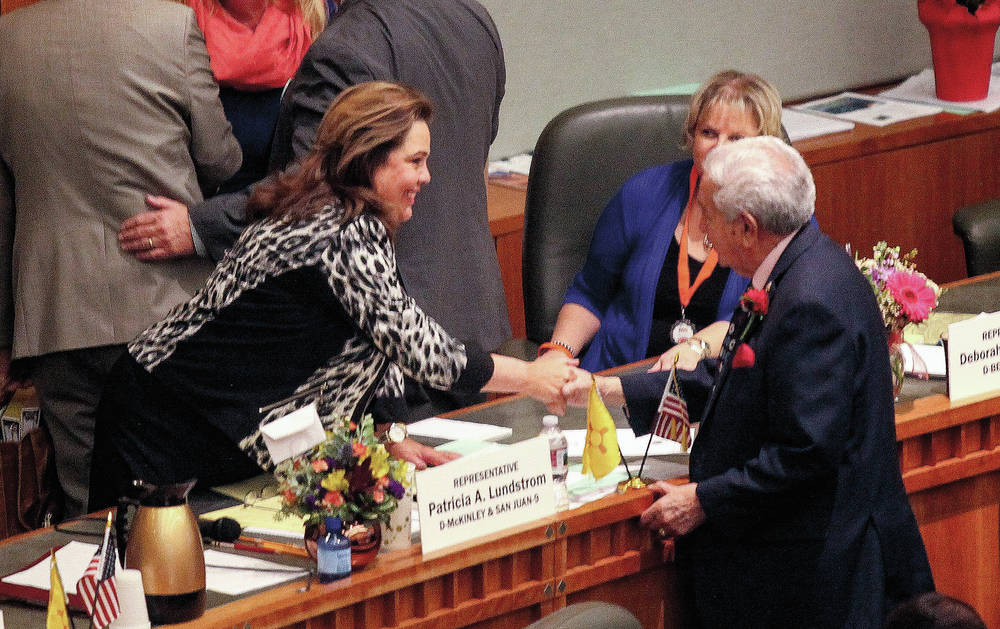 A budget that would raise salaries for public school teachers and state employees while expanding funding for early childhood education sailed through the state House of Representatives on Wednesday by a vote of 65-3.

The budget is a contrast to those in recent years, when financial shortfalls prompted spending cuts and partisan sparring.

Despite the bipartisan support in the Legislature’s lower chamber for the $6.3 billion budget, however, aides to Gov. Susana Martinez were quick to denounce it as a soft on crime.

And some lawmakers are raising concerns that the Legislature has not done enough to remedy cuts to public schools that lawmakers exacted during budget shortfalls in past years.

Still, the version of the budget that now heads to the state Senate in the last two weeks of this year’s 30-day legislative session faces smoother political and economic waters than legislators have seen in the recent past.

New Mexico’s oil and gas industry continues to enjoy a renewed boom, raising more money for the state’s coffers than economists had expected just a few months ago.

“This time last year, we were faced with solvency issues,” said House Appropriations and Finance Committee Chairwoman Patricia Lundstrom, D-Gallup. “… With the economic increase of the oil and gas industry, we’ve been blessed with increased revenue.”

The budget for the fiscal year that starts in July calls for 2 percent pay raises for state employees. Teachers, state police, prosecutors and public defenders would get bigger raises. Starting pay for teachers would go up, too. The budget also increases funding for child care, child protective services and domestic violence prevention programs by $29 million.

With an increase in spending of about $240 million, or 3.9 percent, over the current fiscal year, the budget would leave the state about 10.2 percent in reserves. That would amount to about $646 million.

Still, a spokeswoman for Martinez said the governor is “very concerned” by the proposed budget.

“Unfortunately, lawmakers cut corners in drafting this budget, which is soft on crime, and it shows,” spokeswoman Emilee Cantrell said.

In particular, she argued that the budget leaves underfunded the District Attorney’s Office in Albuquerque, which is grappling with a rising crime rate.

The budget provides an extra boost for the office but less than the governor had originally proposed.

The comment could foreshadow another battle over the budget.

Last year’s session ended with the governor calling the budget irresponsible and gutting it of funding for higher education, a move that forced a special session.

With a vote in the House that cut across party lines, there seemed to be little appetite at the Legislature on Wednesday for another knock-down, drag-out fight over the budget now that New Mexico’s financial outlook has improved.

And legislative leaders argued the budget is mostly in line with what the governor requested.

Some provisions might prove controversial, however. One is $10 million for Spaceport America to build a new hangar. State officials hope the spaceport can become a tourist draw.

There is also funding to give raises to statewide elected officials starting in 2019, including the governor, secretary of state and commissioner of public lands.

There could still be questions over whether the state should set reserves at 10 percent, with some lawmakers mentioning during a relatively brief debate Wednesday that reserves should be even larger, given New Mexico’s reliance on the fluctuating price of oil and gas.

Others suggested the budget does not do enough to make up for budget cuts of recent years.

Rep. Jim Townsend, R-Artesia, proposed a separate bill that would restore $41 million cut from the savings accounts of school districts last year to shore up the state budget, leaving districts with about 3 percent to 5 percent in reserves.

That means that even as the state’s financial outlook has improved, some schools are still feeling the sting of last year’s cuts, he argued.

“If you really think education is important — and I know we all do — we ought to look seriously at giving some of that money back to the schools,” Townsend told the House.