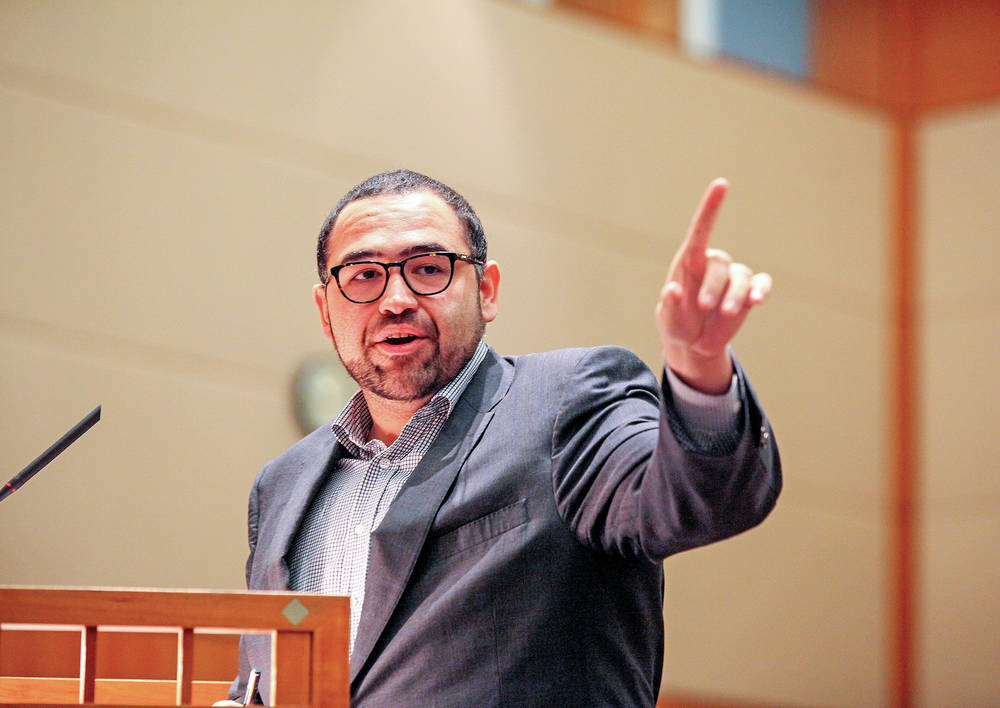 State Sen. Jacob Candelaria, D-Albuquerque, speaks at the Capitol on Saturday in support of Senate Bill 47, which would have allowed Public Service Company of New Mexico to sell bonds to pay for the early shutdown of a coal-burning power plant in northwestern New Mexico. Candelaria sponsored the measure.

A Senate committee dealt a blow to Public Service Company of New Mexico on Saturday by voting to stall a bill allowing the utility to sell bonds to pay for the early closing of a coal-burning power plant in northwestern New Mexico.

The vote followed a more than three-hour hearing, which drew a packed crowd to the Senate chambers. Proponents argued the measure would boost renewable energy in the state while offering aid to residents of San Juan County who heavily rely on jobs at the power plant and a nearby coal mine that supplies it. Opponents, however, painted it as a bailout for PNM and said it would weaken state regulators’ oversight of the utility.

While a vote to table a measure is usually its death knell, the committee’s chairman, Sen. Joe Cervantes, D-Las Cruces, said that despite Saturday’s action, the bill could be heard later in the session if PNM, San Juan County residents and bill opponents negotiate more compromises.

At one point during the committee’s debate, Cervantes, who is running for governor, said he thought it was important to pass a good version of the bill before the session ends.

Still, the clock is ticking. There are only 12 days, as of Sunday, left in the session, and the legislation has several legislative hurdles ahead of it.

“This bill is about one thing: Getting New Mexico out of coal burning and into renewables,” said the bill’s sponsor, Sen. Jacob Candelaria, D-Albuquerque. “This bill would show the rest of the country that we can have environmental stewardship without economic losses.”

Senate Majority Leader Peter Wirth, D-Santa Fe, said he supports the bill’s goal of closing the San Juan Generating Station by 2022 and establishing a “local economic transition fund” of up to $19 million for San Juan County, but there are other parts of the bill he can’t support.

He agreed with critics who said the bill would reduce competition for the renewable energy market and would reduce oversight of the utility by the Public Regulation Commission.

Speakers at the hearing included San Juan County residents and officials who said the bill could be a cushion from the economic consequences of closing the aging electrical plant.

“I’m afraid we’re going to be like Raton,” said Mayor Mark Duncan of Kirtland, a small town near Farmington. He was referring to a northeastern New Mexico town that once was home to a thriving coal mining industry. “People are going to move away. Houses will be vacant,” Duncan said.

Some opponents called the bill a “blank check” for PNM.

Public Regulation Commissioner Cynthia Hall, D-Albuquerque, told the committee she’s against the bill because she believes the commission’s staff is most qualified to deal with such issues. She was the only commissioner to speak at the hearing.

In recent weeks, the utility has been in negotiations that have included environmental groups like Conservation Voters New Mexico and Western Resource Advocates.

Representatives of both of those groups told the committee that PNM had agreed to several concessions through the negotiations. But both groups said a consensus had not yet been reached.

“We’re remarkably close, but we’re not quite there,” Steve Michel of Western Resource Advocates told the committee. He said he’d like to continue the negotiations to resolve “relatively simple issues.”

After the vote, a spokeswoman for Conservation Voters New Mexico said she thinks chances of reviving the bill before the end of the session are slim. But Liliana Castillo said she hopes negotiations resume during the interim committee process after the session ends to craft a better bill for next year’s session.

One committee member who voted to table the bill, Sen. Bill Soules, D-Las Cruces, said after the vote that the interim is the proper time to work on this bill. “This was too complicated for a 30-day session,” he said.

Candelaria said he believes the measure can still get through the Legislature. “It’s on Sen. Cervantes,” he told The New Mexican after the vote. “It’s really on him. … I really hope he can work with us to get past the last 10 yards.”

A spokesman for PNM said after the session that the company remains optimistic that the Legislature will pass a bill. “We take chairman Cervantes at his word that he thinks there’s enough time left in this session to bring people together to move forward,” Ray Sandoval said in an email.

But Sandoval’s original statement on the vote spoke of the bill in past tense.

“PNM believes the Energy Redevelopment Bond Act is an opportunity for New Mexico to become a sustainable energy leader,” he said. “This Legislation would have moved New Mexico considerably forward.”

In an emailed statement, Ben Shelton of Conservation Voters said there were three major concessions environmentalists got out of PNM in the negotiations during the first part of the session. They were:

An identical bill, House Bill 80, is in the House. It has not yet been heard by a committee.

Contact Steve Terrell at 505-986-3037 or sterrell@sfnewmexican.com. Read his blog at http://www.santafenewmexican.com/roundhouse_roundup.