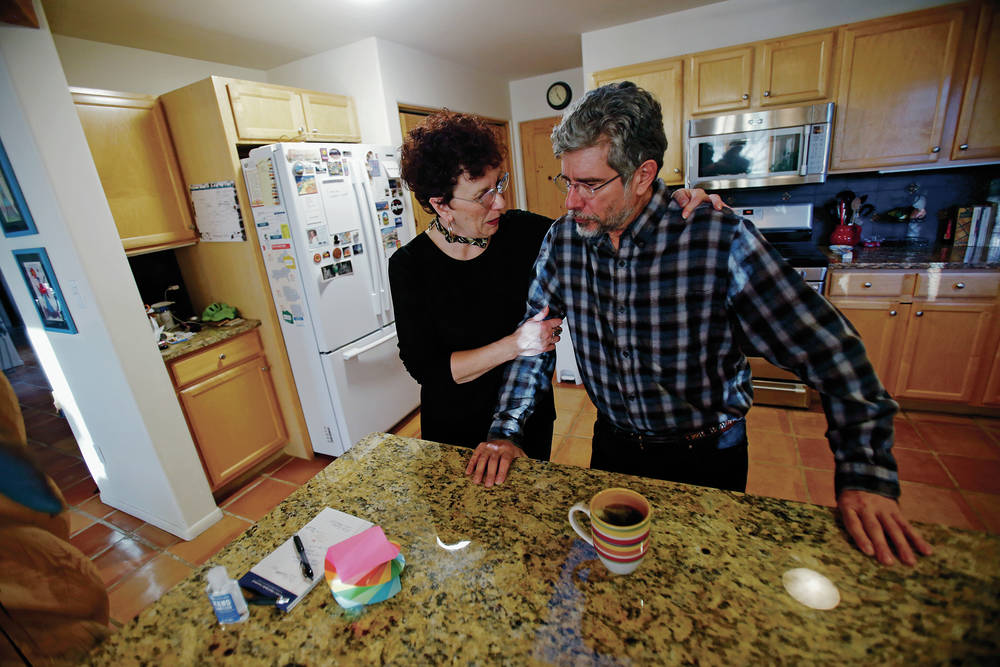 Rob Barteletti and his wife Karen St. Clair sit Friday at their home in Santa Fe. The New Mexico Parkinson's Coalition, of which St. Clair is vice president, pushed a memorial through the Legislature that calls on The University of New Mexico to devise a plan to create a center for patients with movement disorders.

Rob Barteletti falls down a lot.

The 69-year-old retired teacher, who moved to Santa Fe from Portland, Ore., falls about 100 times a year, sometimes three times a day. After a recent interview with The New Mexican, Barteletti stood up and stumbled as he started to walk. His wife, Karen St. Clair, caught him and steadied him in time to prevent a fall.

Falling is a common symptom of Parkinson’s disease, which Barteletti has suffered for at least 16 years. “He just fell outside before we came in,” St. Clair said.

He’s been dealing with the falling, the tremors and the other ravages of Parkinson’s for a long time. But when Barteletti and Wells first moved to New Mexico almost four years ago, they discovered another problem, one they didn’t have back in Oregon: a scarcity of medical options.

“When we moved here to Santa Fe to retire, the one thing we didn’t check out was how easy it was to get health care,” St. Clair said. “And what we discovered was that it was going to take him six months or more to see a movement disorder specialist.”

Barteletti is one of an estimated 10,000 people in the state who lives with Parkinson’s disease. The total number of those diagnosed with movement disorders in New Mexico is 250,000.

If those numbers are surprising, the number of movement disorder specialists available to treat these patients is downright shocking. There are three, all of whom practice in Albuquerque.

With so many mobility disorder patients and so few doctors, many people with Parkinson’s and other such ailments seek treatment out of state. “We just changed Rob’s insurance so we can get treatment in Arizona,” St. Clair said.

Having so few specialists in the state is a challenge for both the patients and the doctors, Dr. Amanda Deligtisch said in a phone interview last week. Deligtisch, who has practiced at the University of New Mexico Hospital for the last seven years, is one of the state’s three neurologists with fellowship training in movement disorders.

“A routine wait for new patients is six to nine months — barring a cancellation or lucky phone call,” Deligtisch said. “Routine followups generally take about six months,” she added, though patients who recently have changed medications or are “doing something new” with their treatment usually can be seen sooner.

As a long-term effort to help with the Parkinson’s treatment shortage in the state, the New Mexico Parkinson’s Coalition, of which St. Clair is vice president, pushed a memorial through the Legislature that calls on The University of New Mexico to devise a plan to create a center for patients with movement disorders.

The issue got media attention last week because of a gaffe by state Sen. Daniel Ivey-Soto, D-Albuquerque, at a committee meeting.

“I do have to say I love actually talking about stuff with the Parkinson’s folks because I get all this nodding, and it feels very affirming as I’m talking,” Ivey-Soto said, evoking prompt condemnation from Republicans and an apology from the senator.

But the measure passed both the House and Senate last week without a dissenting vote.

A movement disorder center at UNM would offer patients specialized care from neurologists certified to treat such disorders, as well as other health care specialists. Backers of the legislation hope the center also would train more specialists in mobility disorders who could treat patients throughout the state.

Having a movement disorder center “would help us in a lot of ways,” Deligtisch said. “There’s a ton more we could offer patients. A center would allow us to get patients together with a physical therapist, an occupational therapist, a nurse practitioner, a neuropsychiatrist to come up with a treatment plan.”

Those who think they might have Parkinson’s would still need to be diagnosed by a physician, Deligtisch said. But, after starting treatment, patients then could seek more specialized care from other health professionals.

For instance, she said, when Parkinson’s patients experience increased falls, a physical therapist can help address that problem. “Access to multiple health care professionals expert in the care of movement disorders, who work as a team, gives patients the most comprehensive and effective care,” Deligtisch said.

The memorial for the movement disorder center came from Jamie Koch, a former state legislator, state Democratic Party chairman and member of The University of New Mexico Board of Regents. Koch, 82 was diagnosed with Parkinson’s last year.

“I have family up in Colorado, and they tried to convince me to come up there and get treatment in Colorado Medical School,” he said in a recent interview. He looked into movement disorder centers and learned that Colorado, Arizona and Texas all have them, but not New Mexico.

Koch, who made his living in the insurance business, said he’s fortunate because he has good medical coverage. Plus, he admitted, he was able to “pull strings” to get an appointment much sooner than most Parkinson’s patients in New Mexico can.

“But what about someone in Taos who doesn’t have insurance and might not be able to travel all the way to Albuquerque for an appointment?” he said. “These are the people who will benefit from a center.”

Barteletti was 52 when he was diagnosed with Parkinson’s, but he suspects he’s had the ailment since his mid-30s. About 18 years ago, he told his doctor that he wasn’t able to play guitar as well as he used to. “I said, ‘I think it’s Parkinson’s,’ ” Barteletti said. But the doctor wasn’t so sure.

Later that year, Barteletti was in Italy with a cousin. His cousin’s girlfriend, a doctor, arranged an appointment for Barteletti with a neurologist. “And she diagnosed me in 10 minutes,” he said.

When he got back home, a neurologist in Portland confirmed what the Italian doctor had found.

When she and Barteletti first moved to New Mexico, St. Clair said, she called the New Mexico Parkinson’s Coalition to ask about a local Parkinson’s support group in Santa Fe. “They said, ‘There isn’t one. … Would you like to start one?’ ”

Today, about 35 to 50 people attend the monthly meetings in Santa Fe.

Koch said when he began researching Parkinson’s care after he was diagnosed, the idea that New Mexico doesn’t have a mobility disorder center astonished him.

He didn’t complete the sentence, but his meaning was clear.

Contact Steve Terrell at 505-986-3037 or sterrell@sfnewmexica­n.com. Read his blog at http://www.santafenewmexican.com/roundhouse_roundup.

What: Monthly support group meeting for Parkinson’s disease patients through the New Mexico Parkinson’s Coalition; the scheduled speaker is Dr. Amanda Deligtisch, who will appear via Skype.