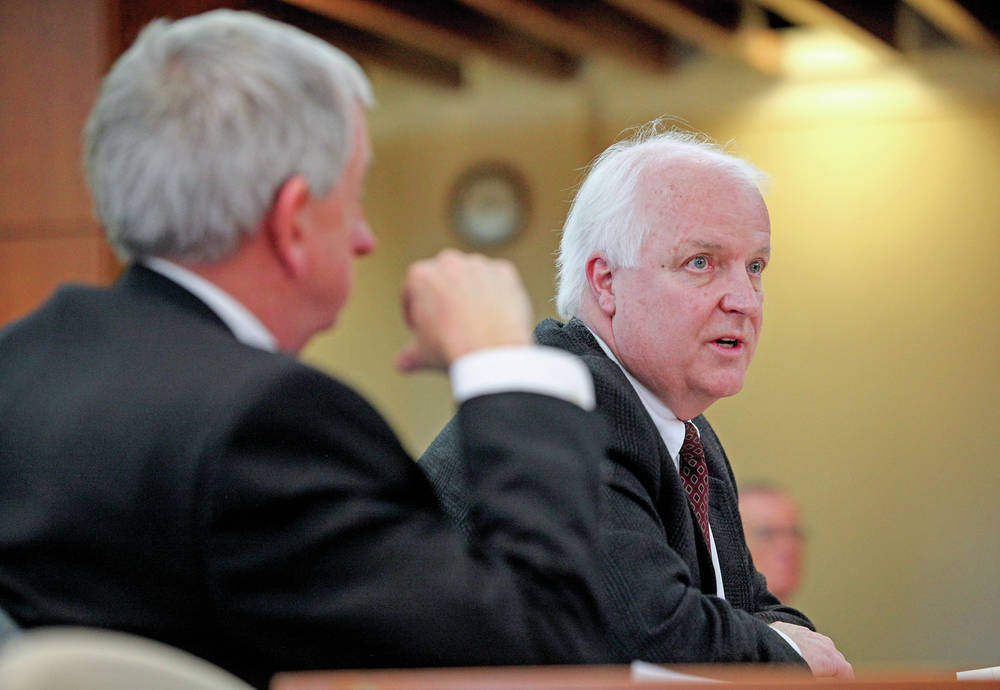 David Barden, CEO for the New Mexico Lottery, speaks on behalf of HB 147 at the Capitol on Wednesday, February 7, 2018. The bill was temporarily tabled.

The state lottery’s luck may have run out at the Legislature.

A House committee on Wednesday tabled a bill that would end a requirement that the New Mexico Lottery turn over 30 percent of the gross revenue of ticket sales for the state’s college scholarship program.

The lottery argues that scrapping the revenue requirement would allow it to boost prizes, in turn raising ticket sales and providing even more money for scholarships, which helped defray expenses for some 26,000 students last year.

Critics contend the bill would amount to a blank check for the state lottery and mean less money for students.

The 8-8 vote by the Appropriations and Finance Committee did not kill House Bill 147.

But it stalls a controversial proposal that has been the subject of an intense lobbying campaign.

Reflecting perhaps just how contentious the debate is among lawmakers, the finance committee initially voted 9-7 to advance the bill to the floor for a vote of the entire 70-member House of Representatives.

But one member of the committee changed her vote to “no,” leaving the bill locked at 8-8.

The committee then agreed to temporarily table the measure, leaving open the possibility that its sponsor could still revive the legislation.

The bill’s sponsor, Rep. Jim Smith, a Republican from Sandia Park, said he would talk to some of the bill’s opponents on the committee to see if he could persuade them.

The disagreements seemed somewhat intractable, however.

Some Republicans who voted against the measure said they simply do not want to support gambling. Moreover, they expressed distrust of the state lottery’s leadership.

Meanwhile, some Democrats questioned the math behind the organization’s argument that the scholarship program would be better off if it did not have to turn over as much money to students.

The lottery only provided $34.8 million to the state’s scholarship program in fiscal year 2007, according to an analysis by legislative aides. In fiscal year 2008, after the 30 percent revenue requirement went into place, the lottery provided $40.8 million. That was a bump of $6 million in just one year.

“I have concerns we’re going lower than what the average has been,” said Rep. Liz Thomson, D-Albuquerque.

Smith’s bill would have required the lottery provide at least $38 million a year for scholarships. And he brought forward an amendment that would have ensured unclaimed prize money went back into scholarships.

Several university student groups have backed the measure with those provisions.

And Smith scratched an amendment from a previous committee that would have eliminated that $38 million requirement after just a few years.

“Why would we want to give up the 30 percent of something that is for sure?” said Rep. Harry García, D-Grants.

The vote may not be the end of the issue, however.

The scholarship program has covered less and less of students’ tuition in recent years, a cause for ongoing concern among lawmakers.

And lottery officials alongside lobbyists for lottery vendors have pushed hard to remove the 30 percent cap.

Her husband, Rep. Antonio “Moe” Maestas, is an Albuquerque Democrat and sits on the House Appropriations and Finance Committee.

He voted in favor of Smith’s bill on Wednesday.

Asked if he should have recused himself because of his wife’s work, he said no.

“I have an obligation to vote on matters of public policy. That was what I was elected to do by my constituents,” he said.

Maestas also said 12 couples across the country, including four in New Mexico, are lobbyists married to legislators. He said the National Conference of State Legislatures advised him and the rest of the lawmakers that they should not abstain from or avoid votes in which the spouse has a lobbying interest.

To do so, Maestas said, would mean more companies would hire his wife because they would negate his vote.