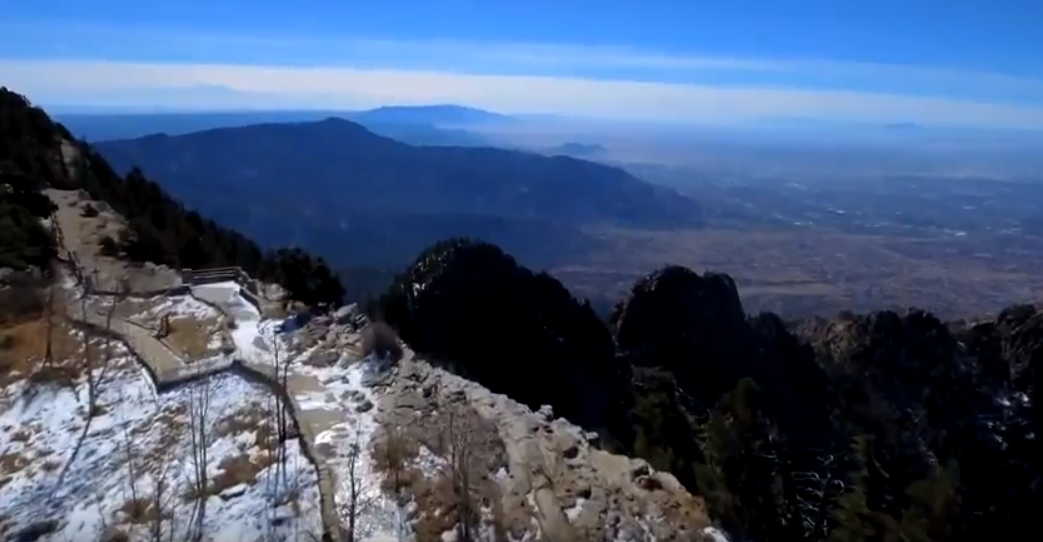 From Our Land (NM In Focus). Drone footage shot by Anthony Rodriguez

On the last day of January, Kerry Jones points to signs near the Crest Trail in the Sandia Mountains. Nailed to a conifer, the signs guide cross-country skiers along the trail and they’re placed high enough to be visible in the winter snows. Today, the signs are a good three feet above his outstretched arm. Beneath his boots, there are only a couple of inches of snow.

It’s not supposed to be this way.

And a few hundred yards away at Sandia Peak, the view is even more grim.

Thousands of feet below, the Rio Grande Valley is dusty and dry. To the west, Mount Taylor should be a hulking white mass this time of year. Instead it’s just a deeper shade of blue than the sky. Along Sandia Crest, what snow there might have been has blown back from the edge.

“We’re up at just a little bit above 10,000 feet and in the world of weather this is high altitude,” says Jones, a warning coordination meteorologist with the National Weather Service in Albuquerque. “This time of year we should be not on bare ground as we are today, but [standing in] several feet of snow.”

The lack of snow in New Mexico’s mountains will have implications for farmers and cities in the spring and summer. And certain tree populations in many of the state’s mountain ranges, including the Sandias and Jemez Mountains, are already experiencing large-scale dieoffs. Drought and warming temperatures have weakened ponderosa pines and some conifers, which make them even more vulnerable to insect outbreaks. And communities should be preparing for wildfire season.

“We are standing at the driest start to any water year on record in the observational period, which goes back to the late 1890s,” Jones says. “There is no one alive today that’s seen it drier for any start to a water year.”

A water year begins October 1, and helps meteorologists, water managers, tribes, and various agencies plan. Jones says that New Mexico’s snow accumulation season typically begins in late October. From there, snowpack is supposed to build through early spring. Jones says that storms may still hit the Sandias and other mountains in New Mexico this spring—and this weekend’s storms brought one to six inches to places like Gallup, Santa Fe and Angel Fire. But new snow won’t likely make up for the existing deficit.

“We would basically need two and a half times our normal precipitation for northern New Mexico into southern Colorado to even bring us back to where we should be this time of year,” he says. “When you think about it, that’s just a tremendous deficit to overcome.”

It would be “pretty unprecedented,” he says, to get that much snow between now and early April.

On the last day of January, the National Weather Service even issued a Red Flag Warning for most of eastern New Mexico. These warnings alert people to critical fire weather patterns and usually start in the spring. It was the sixth they issued in January.

Winds increase fire danger and whip up dust storms. They also dry out soils and whisk snows away before they can melt and make their way into streams and rivers.

“As we’ve seen for the last several years, we’re not getting as much snow—and it’s warmer and so we’re melting that snow much earlier,” says Jones. Instead of snowmelt peaking in May and June, when farmers need that water for their fields and orchards, the waters are churning in late February or March.

And of course, people are already worried about fire season.

“This is a pretty scary year,” says Tom Swetnam, regents’ professor emeritus of dendrochronology at the University of Arizona, where he directed the Laboratory of Tree-Ring Research. “I’m very worried about this year, which is shaping up to be an extraordinary drought year.”

The connection between drought and fire is obvious in the 20th and early 21st centuries—think about Las Conchas, a wildfire that ripped through 156,000 acres of the Jemez in 2011. It’s also visible within the tree-ring record, which Swetnam and his colleagues have been studying for more than 30 years. And their records go back centuries.

Related story: The Heart of Darkness: A walk through the scorched landscapes where our forest used to be and a glimpse of our future fires

“A lack of moisture in the cool season preceding fire season is really key,” says Swetnam. Dry winters and springs are a recipe for bigger, hotter fires in the Southwest.

Overlaid onto cycles of drought is long-term warming. As the Earth continues warming, droughts aren’t just dry. They’re also warmer than they used to be in the past, Swetnam says. “Now, when we flip into a drought mode on a yearly or seasonal basis, on top of that, the magnitude of the drying is exacerbated by warming,” he says. “It makes it even more intense.”

Tree ring scientists peer into the past to understand the impact of drought on forests. But Swetnam can also look outside his window to see how how forests in the Jemez Mountains have changed over the past few decades. Swetnam grew up in Jemez Springs and moved back here from Tucson a few years ago.

His father was a forest ranger on the Jemez Ranger District, and he recalls playing in the snow on the hillsides off the highway between Jemez Springs and the Valles Caldera. Those same grassy valley bottoms and rounded hills are now covered in trees. “There’s been an increase in density just within my lifetime,” he says. “It’s clearly noticeable.”

After decades of fire suppression and overgrazing, the forests became far too dense—and those fuels also increase the risk of high-severity fires.

Swetnam warns against overgeneralizing across all forest types and elevations in the Southwest. But the Jemez is the “poster child for high severity wildfire” in New Mexico. “One after another, fires have been eating away at the forest up here, creating giant canopy holes and destroying hundreds of homes,” he says. “With the potential of losing thousands of homes.”

Sandia Mountains visible in the background, from the Las Conchas burn scar, six years after the fire burned through here.

The U.S. Forest Service and its federal, state, tribal and local partners have been working to thin the forests.  And Swetnam is encouraged by programs like the Southwest Jemez Mountains Resilient Landscapes and Collaborative Forest Landscape Restoration Project. “There are other organizations, like The Nature Conservancy and others that are working hard to try to turn things around in terms of the resiliency of our forests, and make them more resilient,” he says. But people living within and alongside the forest need to take fire seriously. Right now, people should be reducing fuels around their homes, and preparing to evacuate if the time comes.

“We all have a collective responsibility to deal with the problems, especially if you have a home in the forest—it is your responsibility to reduce the risk to you home, your neighbor’s home—and the firefighters who would have to come in and try to save houses,” he says.