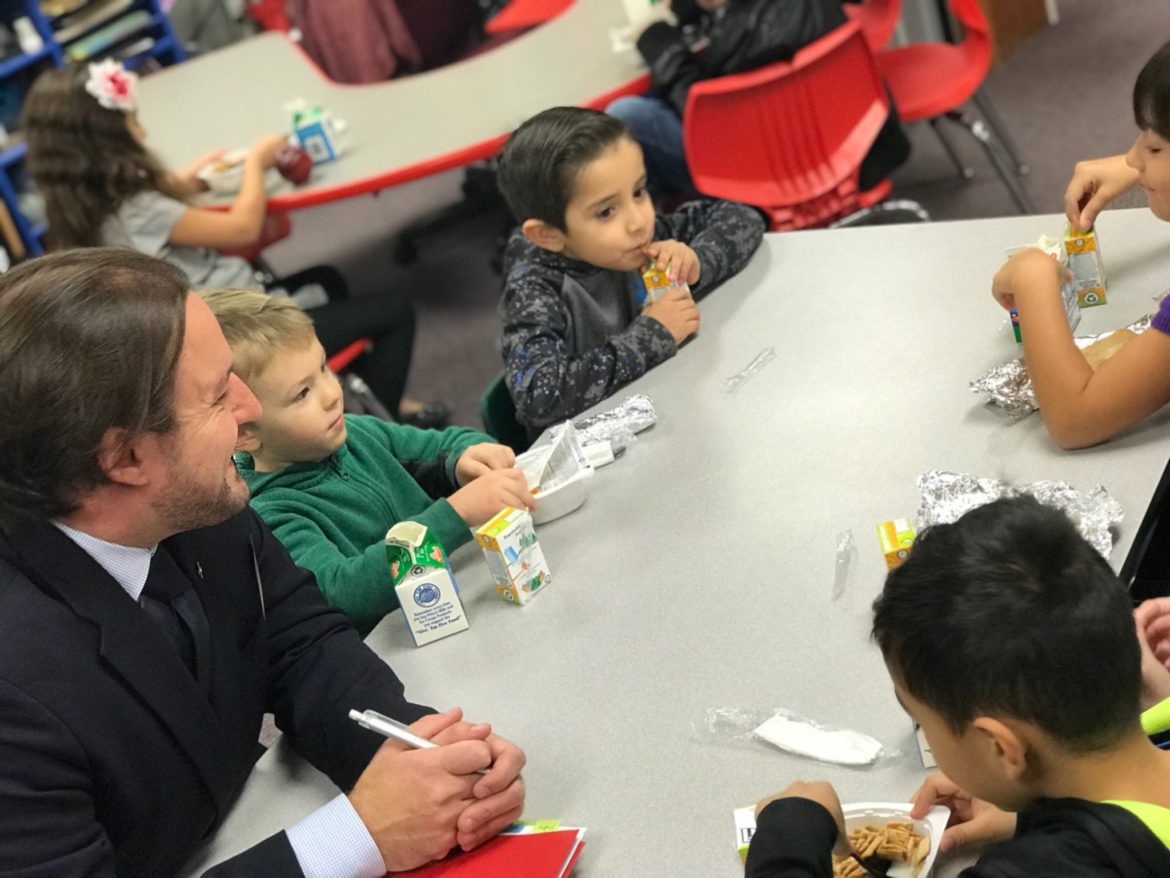 NM PED Secretary Christopher Ruszkowki at Breakfast Before the Bell at Chaparral Elementary in Deming. (Twitter)

A senior Democratic lawmaker says Christopher Ruszkowski, secretary-designate of the state Public Education Department, has not consented to a background check, preventing the Senate from holding his confirmation hearing.

“We require all teachers and administrators and others in the [education] field who deal with children in our public schools to be cleared, and we are still unable to do that with Mr. Ruszkowski,” Senate Rules Committee Chairwoman Linda Lopez, D-Albuquerque, said Monday in a statement. “He is operating as Cabinet secretary without authority to do so.”

But Lopez said the Martinez administration did not send formal notice to the Senate, which the state constitution requires within 30 days of appointment.

The governor’s office countered that Ruszkowski underwent a rigorous background check before he was appointed as a deputy secretary in April 2016.

Ironically, Lopez’s comments came the same day that the Senate Education Committee voted 5-3 to approve a bill that would require all school employees to undergo background and fingerprint checks — an action supported by the Public Education Department.

Current state law allows school employees hired before 1999 to be “grandfathered” into the school system without undergoing a background check. The bill would ensure those employees undergo background checks, said Sen. Daniel Ivey-Soto, D-Albuquerque, sponsor of the measure.

Mike Lonergan, a spokesman for Martinez, dismissed Lopez’s comments about Ruszkowski being uncooperative as “nothing more than the latest in a long line of failed political games from Senate Democrats desperate to hide their inability to do their jobs.”

The governor for years has accused Lopez of holding up the confirmation process for many appointees. Lonergan said the Senate Rules Committee has a backlog of more than 100 nominees to various boards and committees awaiting a hearing.

“It’s clear Linda Lopez is unable to do her job no matter how much paperwork is done,” Lonergan said.

Senate Democrats clashed with the governor over Ruszkowski’s predecessor, too.

The Senate finally confirmed Hanna Skandera as secretary of the Public Education Department in 2015 — after she had been in office for four years.

It seemed for a moment as if Ruszkowski would avoid the controversies that surrounded Skandera’s time as secretary.

But Lopez earlier in the legislative session called for Ruszkowski to resign over his comment about Manifest Destiny being one of the founding principles of the country. Pueblo leaders assailed Ruszkowski for a poor grasp of history.

With only three days remaining in the legislative session, it is unlikely that Ruszkowski would receive a confirmation hearing in the Rules Committee, even if he agreed to the background investigation.