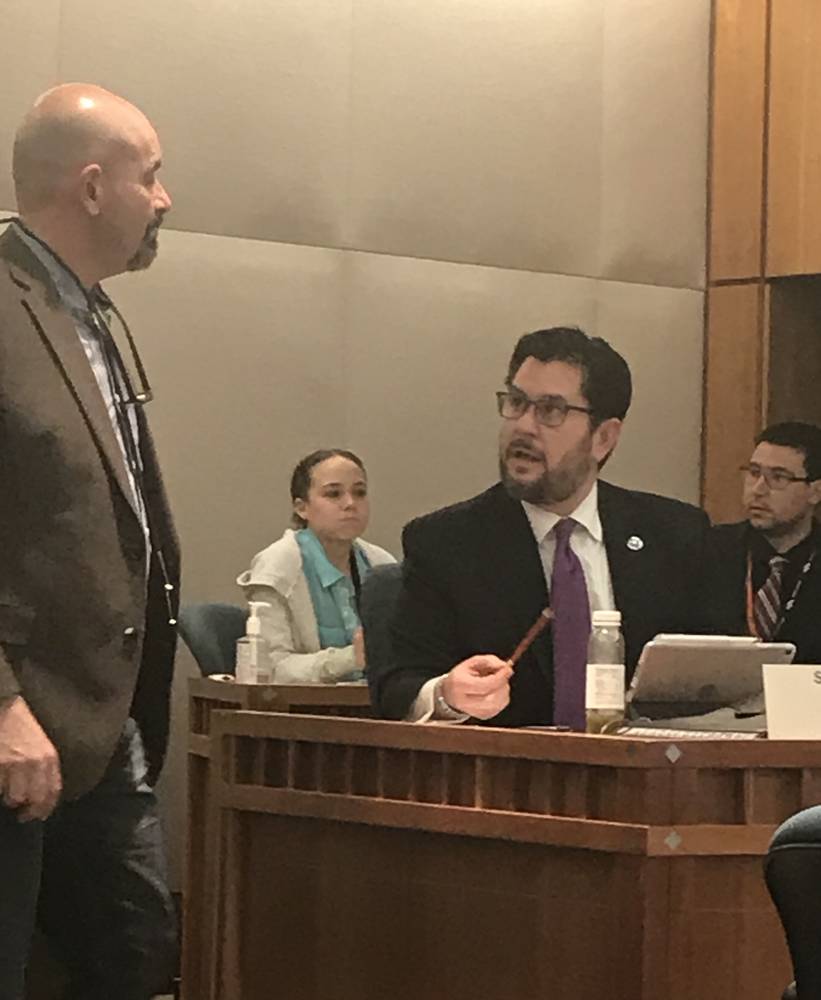 State Rep. Rod Montoya, R-Farmington, talks to House Speaker Brian Egolf, D-Santa Fe, Monday about Montoya's House Bill 325, which is aimed at helping communities, like San Juan County, that would be hurt by closing coal-fired power plants. The committee on Tuesday voted 10-2 to give the bill a favorable recommendation and send it to the House floor.

In a case of strange political bedfellows, a conservative lawmaker from San Juan County and the leader of a Santa Fe environmental group not known for compromising came together Tuesday to back a bill aimed at easing the economic woes of New Mexico communities hit by the closing of large coal-burning power plants.

The House of Representives voted 44-25 to pass Rep. Rod Montoya’s House Bill 325, designed to help a large school district keep most of its tax base if Public Service Company of New Mexico closes the San Juan Generating Station by 2022.

To become a reality, the measure would also have to clear the Senate before the Legislature adjourns at noon Thursday.

“Are you going to refer to me as an environmentalist activist,” Montoya joked with a reporter Tuesday.

Endorsing the bill was Mariel Nanasi, executive director of New Energy Economy, a Santa Fe-based non-profit that has fought many PNM rate increases and other proposals before the state Public Regulation Commission.

That support was the result of hours of negotiating between Montoya, Nanasi and representatives of other environmentalist groups over the past several days.

But a coalition of seven other conservation groups issued a statement Monday urging lawmakers to reject the bill, saying it is “not a replacement for a strong clean energy policy.”

The state Public Regulation Commission would be required to consider the economic effects on communities when deciding cases involving the shuttering of large power sources such as the San Juan Generating Station in northwestern New Mexico.

The utility closing a coal-fired plant would have to procure replacement power within the school district where the old plant was — as long as the cost is no more than 110 percent of the estimated cost of building in another location.

In choosing what kind of energy would replace coal, the bill would require the new facility to use a replacement resource that would minimize environmental impacts and be “the utility’s most cost-effective option among feasible resources.”

Not all environmentalists were on board with the bill.

Steve Michel of Western Resources Advocates said while he supports the goal of the legislation, he believes it favors natural gas as a replacement rather than renewable energy such as solar or wind power.

Later, Michel’s group was one of seven conservation groups — including the Sierra Club, Natural Resources Defense Council, Environment New Mexico, Conservation Voters of New Mexico, Western Environmental Law Center and the Union of Concerned Scientists — to sign a letter opposing the bill. The statement said the measure would provide “an economic thumb on the scale” to keep the San Juan plant open and would make it difficult for renewable energy from elsewhere in New Mexico to compete if the constraints of this bill are in place.”

The coalition’s letter says, “The bill will govern the development of hundreds of millions of dollars of energy resources in New Mexico, and the implications of the bill should be fully understood before passage. San Juan Generating Station will not be abandoned until 2022. There is time to address these issues in a thoughtful and deliberative manner.”

David Jaramillo, a lobbyist for PNM, told the House Judiciary Committee Tuesday that the utility had not been invited to participate in negotiations and did not have a chance to vet HB 325. “There are unanswered questions,” he said. “What does it mean for the ratepayer? Since we don’t know the nature of replacement energy we don’t know what the benefit will be.”

Montoya estimated that the utility’s customers would have to pay a little more, but only about $1 more per billing cycle. he said the bill would recapture about 70 percent of the property tax revenue that would be lost if PNM closes the San Juan plant.

Earlier in the legislative session, a Senate committee tabled a PNM-backed bill that would have allowed the company to sell bonds to recover the expenses related to closing the plant by 2022, some 30 years before schedule.

That bill, Jaramillo said, “was a comprehensive solution. It’s a shame that didn’t get the the finish line.”