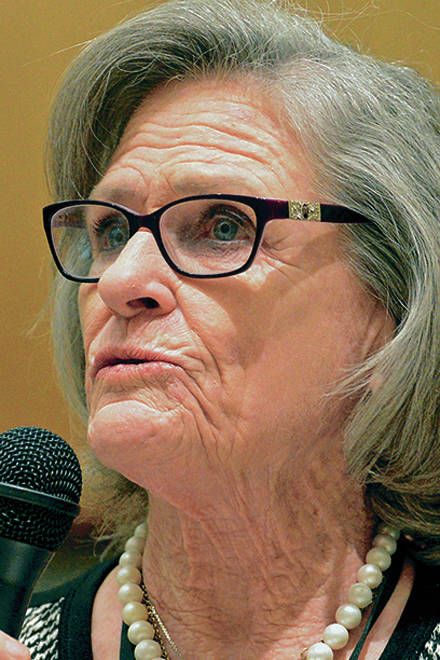 The president pro tem of the New Mexico Senate on Wednesday called for the resignation of the five regents of New Mexico State University, saying they had arbitrarily stripped powers from Chancellor Garrey Carruthers.

The regents voted Monday to prohibit Carruthers from hiring and firing people in executive or coaching positions at the main campus in Las Cruces and on NMSU’s branch campuses.

She stated in a letter of complaint to the regents that they had inappropriately and perhaps unlawfully delegated their responsibilities to one person while taking away authority from Carruthers.

Papen’s reference was to regents board Chairwoman Debra Hicks, who was empowered by the rest of the board to make interim appointments.

“The board is shirking its constitutional responsibilities in the control and management of NMSU by delegating its collective authority to the board chair,” Papen wrote.

Hicks, of Hobbs, did not immediately respond to a message seeking comment.

Papen distributed the letter to fellow legislators in hopes that they would sign it.

Many quickly did so, including Sens. Bill Soules, D-Las Cruces, and Howie Morales, D-Silver City.

“I just think what the board did is uncalled for,” Soules said.

Morales said at least three Republicans from the House of Representatives had added their names to Papen’s letter calling for the regents to resign. They are Reps. Yvette Herrell of Alamogordo, Candy Spence Ezzell of Roswell and James Townsend of Artesia.

Senate Minority Leader Stuart Ingle, R-Portales, was writing a letter of his own criticizing the regents for their treatment of Carruthers.

That letter, which had not yet been made public, did not go so far as to seek the regents’ resignations, said Sen. Steve Neville, R-Aztec.

Neville has been a vocal supporter of Carruthers for years. He said the regents were “a little heavy-handed” in taking away the chancellor’s powers.

Neville spoke out for Carruthers last year when the regents said Carruthers had announced his retirement. Soon after, Carruthers, 78, said he wanted to work as chancellor for another few years.

The regents then voted to search for a new chancellor and said Carruthers would leave office at the end of June, when his five-year term expires.

In debate Wednesday on the Senate floor, several Democratic senators spoke on behalf of Carruthers and against Republican Gov. Susana Martinez’s record on picking regents. No Republican senators spoke during the debate, though Carruthers is a former GOP governor of New Mexico.

Papen’s call for the ouster of the NMSU regents was challenged in certain respects by one Democrat, Sen. Jacob Candelaria of Albuquerque.

Candelaria said the Senate should hold up-or-down votes on nominees for regent seats through its confirmation process. That has not always happened.

He said he was frustrated by the politics on all sides when it comes to seating university regents.

In Martinez’s seven years as governor, the Senate has rejected only one of her nominees for a board or commission. They did not confirm Matt Chandler for a seat on The University of New Mexico Board of Regents.

Martinez later appointed Chandler to a District Court judgeship, a job not subject to Senate confirmation.

In addition to Hicks, members of the New Mexico State University Board of Regents are Kari Mitchell, Mike Cheney, Jerean Camerez Hutchinson and Margie Vela. Vela is a student at NMSU.