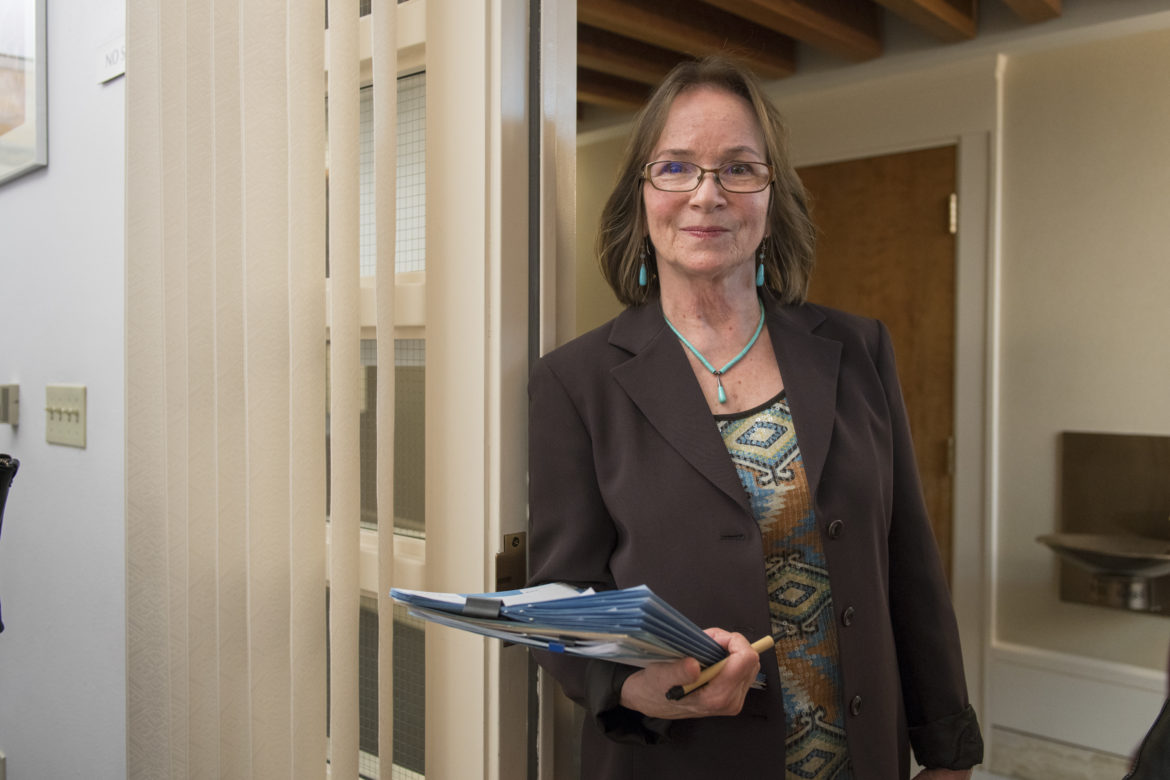 Santa Fe – She was 3 years old when her father died in a car crash and 17 when her mother committed suicide. In between those bookends of loss, she lived with the man she refers to as “my evil stepfather.”

He demeaned her, her two older sisters and her younger brother, and punished them with a belt when they didn’t meet his exacting standards.

At night, he crept into her bedroom. “He would reach under my pajamas and start,” she says.

Decades of therapy after a nervous breakdown have led Mimi Stewart, at age 70, to a place where she can talk about her childhood trauma.

Stewart was a state representative for 20 years and has served in the Senate since 2014. She can be abrupt and hectoring in committee hearings and on the floor. She is also one of the New Mexico Legislature’s most dogged and prepared members, with a passion for education and a knack for working across party lines and getting bills passed.

As the sun fades and her office on the fourth floor of the state Capitol darkens – Stewart, 70, has a pet peeve about wasting electricity – she says everything she needed to know about politics she learned in that haunted house with the man her mother brought home when she was 5.

“I’m good at politics because I learned how to work in coalition – with my siblings,” she says. “How to mediate with someone who we don’t trust and like – my stepfather. How to determine what to do about right and wrong – because my stepfather lied to my mother about what we did and who we were.”

She stops and starts again.

“I have more resilience than probably most people have.”

Stewart first came to the Roundhouse more than 25 years ago as one of the legions of citizens who seek to influence policy concerning something they care about.

For Stewart, who taught special education at Zia Elementary School in the Albuquerque Public Schools, that was teachers and education. Watching the process piqued an interest in politics, and in 1992 she made an audacious move.

She challenged the Democratic incumbent in her Eastside Albuquerque Senate district in the primary and lost by only 63 votes. Two years after that, with backing from the Albuquerque and New Mexico teachers’ unions, she ran for her House seat and won.

Twenty-three years later, the Democrat has served as chair of the House Education Committee. She served as vice chair of the Senate Education Committee before resigning in January after being elected majority whip. She has been instrumental in getting enacted many of the state’s advancements in education, from a tiered licensure system for teachers to a K-3 Plus program that extends the school year for low-income children.

She has been a sharp critic of Gov. Susana Martinez’s education policies, in particular the controversial Partnership for Assessment of Readiness for College and Careers, or PARCC, a computer exam administered in grades 3 through 11. She has been a staunch opponent of the governor’s decision to assign A-to-F letter grades to New Mexico’s public schools. And she has been a primary impediment to the passage of one of Martinez’s most persistent demands: mandatory retention of third-graders who can’t read at grade level.

Not content to simply put the brakes on Martinez’s proposals, Stewart has introduced her own legislation on these topics. That includes proposals for a replacement A-to-F grading system and intervention supports for children struggling to read.

This year, Stewart was named New Mexico’s most effective lawmaker by FiscalNote, a Washington, D.C., firm that uses an algorithm counting bills sponsored, bills moved out of committee to the floor and bills enacted.

But back in 1995, she got off to a rocky start. Freshman member Stewart – always the prepared student – painstakingly researched her bills, presented them with enthusiasm and was furious when other lawmakers didn’t support them.

After a few years, Rep. Max Coll, the longtime chairman of the House Appropriations and Finance Committee and a fellow Democrat, had seen enough.

“You know your bills. You’re passionate,” he told Stewart in a written note. “But it would be a lot better if you were not angry on the floor of the House. They push your buttons. You show them where all the buttons are and they have a heyday with you.”

Stewart, who has been described as a “whirlwind,” admits Coll was right.

“I’ve had to struggle with my anger,” she says.

Her sharp tongue is a calling card. In 2013, when the Democratic leadership helped push through a corporate income tax cut, some angry legislators characterized the measure as hasty and unfortunate. Stewart called it “a royal screw job.”

As she has said with a tight smile, “I tend not to edit myself very well.”

A passion for change

Stewart stands 5 feet 3 inches tall and bristles when she is referred to as short. (“I’m normal!”) She has worn the same uniform – black slacks, colored jacket, turquoise jewelry – for decades, while keeping her hair in the same neat bob.

Fellow Sen. Bill O’Neill, a Democrat, described that hair as “perfectly parted, perfectly straight,” in a book of poetry he published this year. The poem about Stewart is called “House Bill 644” after a 2001 bill she sponsored that would have raised the retirement age for some state pensioners.

He described her in the midst of an argument on the House floor: “The fury in her elfin face as she reddens and the thundering begins. Her anger is a clear stream, always, and merits respect.”

O’Neill considers Stewart to be his political mentor and a personal friend. But that doesn’t mean he’s safe from her fury.

“When I cross her, that’s a tough one. She gets angry at me,” he says. “In her defense, she just cares so deeply about her bills that she can’t believe anyone would vote against them.”

When Stewart gets over her pique and he is again in her good graces, O’Neill knows it only by sensing a rewarming of the relationship.

“I can’t remember her ever apologizing,” he says.

‘I’ve tried to slow down’

Last July, Stewart was representing New Mexico in New Orleans at an education conference and sat on a panel about closing the achievement gap.

When it came her turn, Stewart, who has a master’s degree in education and taught for 30 years before she retired in 2009, spoke about the challenges of teaching children from low-income neighborhoods who come to school unprepared to learn.

“We don’t know how to teach kids from poverty,” she said. “They come with no skills – well, they have street-fighting skills. They’ve got a lot of skills; they’re just not academic skills.”

Martinez, who has pushed for five years for the third-grade retention bill and who calls Stewart a “liberal elitist,” pounced. Her office tipped the New Mexico news media to a recording of the New Orleans panel, and she issued a statement that read, “I believe all children can learn, and unfortunately many liberals believe some children are destined to fail.”

So it might have surprised a few of her colleagues when Stewart last year received the Senate’s “Milagro Award” – an award presented at the conclusion of each session to a member who has performed exceptionally well. Stewart was singled out for “wisdom,” “courtesy” and “elegance.”  Stewart displays the framed award in her office and points it out proudly. It’s an acknowledgment that she’s made headway in her efforts to be less strident and more patient – to sand down some of the rough edges of her personality.

K-3 Plus, one of the bright spots in New Mexico’s early childhood education landscape, is a case in point. It began in 2003 when Stewart, then in the House, sponsored a bill that would pilot a program in a handful of school districts to extend the kindergarten year to help disadvantaged children catch up and be on more equal footing with their peers. It passed with broad bipartisan support.

In 2007, she sponsored the bill that established the state’s current K-3 Plus program as a six-year pilot and again received near-unanimous support.  In 2012, her bill made the program a permanent part of the state Public Education Department.

“She’s beyond 100 percent committed to education and particularly early literacy,” says Claire Dudley Chavez, executive vice president of the New Mexico Early Childhood Development Partnership. “And she is courageous and not really afraid of anybody and just dogged. When she is passionate about something, she is just a dog with a bone.”

When she was in elementary school and was asked what she wanted to be when she grew up, Stewart said “actress” and “teacher.” Ten years ago, as she was turning 60, Stewart wrote and performed a one-woman show at a small theater in Albuquerque. It was called “The Scary Life of Mimi Stewart,” and it explored her childhood traumas and the effects of being orphaned at 17.

In the show, Stewart included her arrest for drunken driving. It happened early one morning in May 1999, when a Santa Fe police officer found Stewart asleep in the driver’s seat of her Toyota Corolla. The engine was running; the headlights were on. When the officer woke her, she told him she didn’t know where she was.

She later said she had consumed three margaritas with dinner at Tomasita’s at a Cinco de Mayo party.

By the end of that day, Stewart had admitted her mistake, apologized, pleaded guilty to the charge and accepted a sentence of fines and 48 hours of community service.

What could have been a career-killer – Stewart was an advocate for tougher DWI laws at a time when New Mexico was a national leader in DWI fatal crashes – was taken care of in a news cycle.

Stewart’s sense of conscientiousness – whether it’s reading every last word of a report, volunteering for every committee or admitting she was driving drunk – was born at age 17.

In the summer after her junior year in high school, Stewart’s mother moved back to Arizona with her husband and son. Stewart got a job as a maid at a summer resort and arranged to live with a friend during her senior year.

A few weeks later, Stewart’s sisters dutifully mailed birthday cards to their mother. They didn’t arrive in time, however, and Stewart forgot altogether. On July 22, the day of her 44th birthday, her mother shot herself, leaving behind a suicide note that read, “Not even a card or a present.”

“So I’ve done a lot of therapy,” Stewart says. “Some people think I’m overly responsible. I may have that. I volunteer for things. I feel like I want to step in and help people.

“I want to solve problems. I’m manic about politics. I work all the time. I have a T-shirt that says, ‘Please stop me from volunteering again.’”

She ignored that T-shirt message when asked three years ago to serve on the National Conference of State Legislatures’ International Education Study Group, a small group of state lawmakers tasked with looking to other countries for ways to improve educational outcomes in the United States.

The work has prompted Stewart to turn the interim education committee she chairs into a tutorial on best practices, with assigned reading and nationally recognized education experts as guest speakers.

Stewart, who has often chafed at the pace of education reform, is heartened by the reception from committee members. She’s set her hopes on a new governor — whoever that may be — in 2019.

“I’m so excited about what we’re doing,” Stewart says. “I’m much more hopeful now than I’ve ever been.”