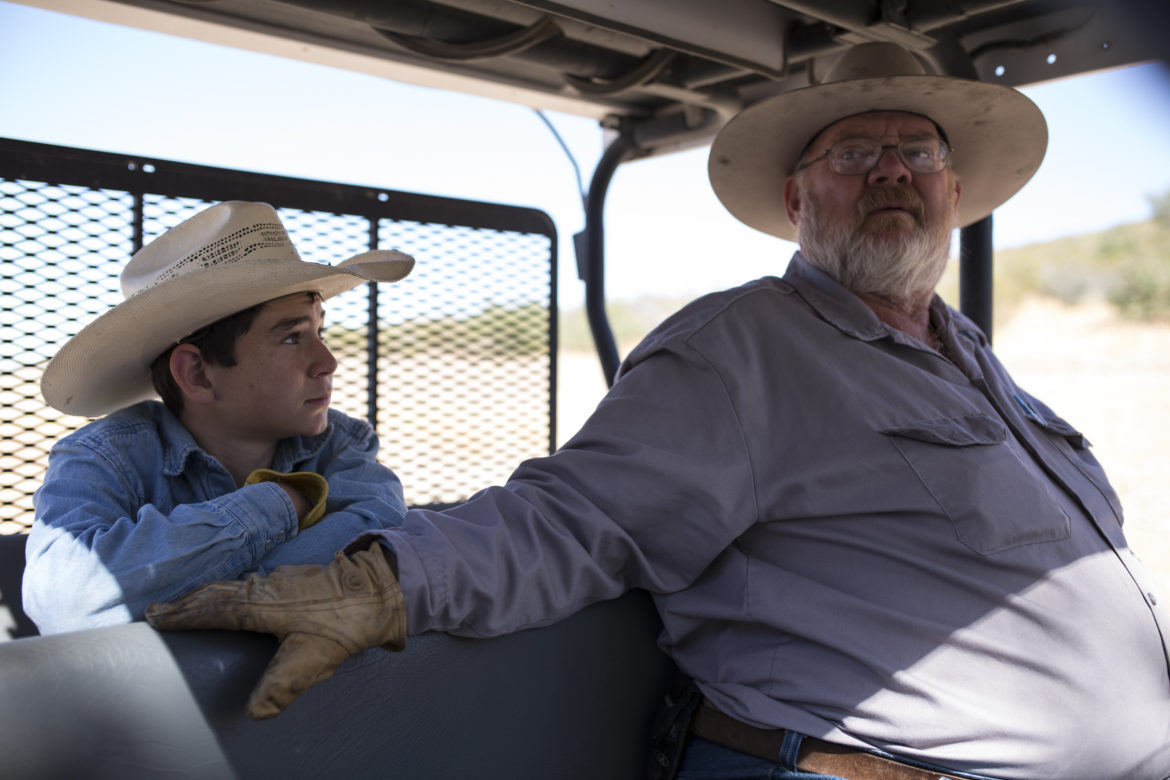 James Hurt (left) and his father, William Hurt, sit on the ranch cart as they work early one fall morning.

ALAMO-HUECO RANCH — The boys wake before dawn, eat sausage and biscuits in the cookhouse and saddle their horses at first light.

James Hurt is 12, a month away from becoming a teenager. His brother, David, is 11.

They wear Wrangler shirts, jeans and cowboy boots and move quietly in the dark corral, lit by a single bulb. It’s an autumn Sunday in 2017. Today they’ll help their Uncle Avery Hurt bring in from pasture a herd of hundreds of cattle.

It is a dangerous job, and they know it. They take ranch work seriously and see their future here.

James Hurt helps prepare for an early morning breakfast as other ranchers and extra hands joined before heading out to round up cattle to wean the calves.

“Like, in this part of New Mexico you can learn about it” — the land, he means. “You can learn from your family and learn about the place. You can travel across all this country.”

This “country” is the Alamo-Hueco ranch belonging to the boys’ father, William Hurt, a third-generation rancher in New Mexico’s Bootheel. The ranch — one of the state’s largest, a mix of private, federal and state land — stretches from the U.S.-Mexico border to the south and east, across hills of mesquite and creosote 35 miles north to Hachita.

It is a place of peace and beauty and significant risk: Drug smugglers have used the ranch roads to illegally move dope across the border. Last month, Border Patrol found 61 bundles of marijuana — weighing 1 ton, with a street value of $1.5 million — hidden near a dirt road.

David and James Hurt ride their horses across the ranch as they make their way to round up cattle early one morning in the fall. The boys are active daily on the family ranch and both intend to continue the ranching tradition when they are older.

Of living on the border, James says: “You have to be real cautious. You have to always look around you, especially in our southern pastures and also in our eastern pastures because there could be some illegal activity out there.”

Their mother, Lupe Hurt, is Mexican. She has always spoken to them in Spanish, so they know the language and use it to translate between the Mexican and Anglo cowhands who work the ranch.

On this Sunday, the sun climbs higher.

The Hurt boys help push the lowing herd into pens, then let the professional cowhands do the work of separating the bulls from the cows and the cows from the calves. The boys put their horses away and help by standing on a catwalk in the pens, whipping the animals as they push and shove their way into the corrals.

Isolated from cell service and tasked with learning the family business, the Hurt boys have been riding horses, handling pocket knives, shooting guns and driving machinery for so long they can’t remember the first time they did any of those things. Their father is strict about safety.

Hidalgo County is one of six “completely rural” counties in New Mexico, according to the U.S. Census Bureau. The nearly 3,500-square-mile county averages just 1.4 people per square mile.

The boys have one of the longest bus commutes to school in the state, nearly two hours each way to and from Animas. The school runs a four-day week to make life a little easier for far-flung students.

James says they try to sleep after the bus picks them up at 6:10 a.m. On the way home, David says, he listens to country music.

“I think I learn more out here, because there is so much stuff I can grasp onto out here,” James says. “But I still need to go to school so I can know mathematics and English and language arts and science.”

James became class president in the fall at Animas High, an “A” school under the state’s grading system.

On the ranch, he says, “I can learn how to ride a horse, how to saddle my horse, how to work on stuff, how to run machinery, how to get a herd to do what you want — which is almost impossible sometimes.”

Lunch, homework — an exercise on pronouns for James, some book reading for David — then shooting practice in the afternoon.

What is their favorite thing to do?

David chimes in: “Riding a horse and processing calves and sorting and weaning and branding — and that’s about it.”