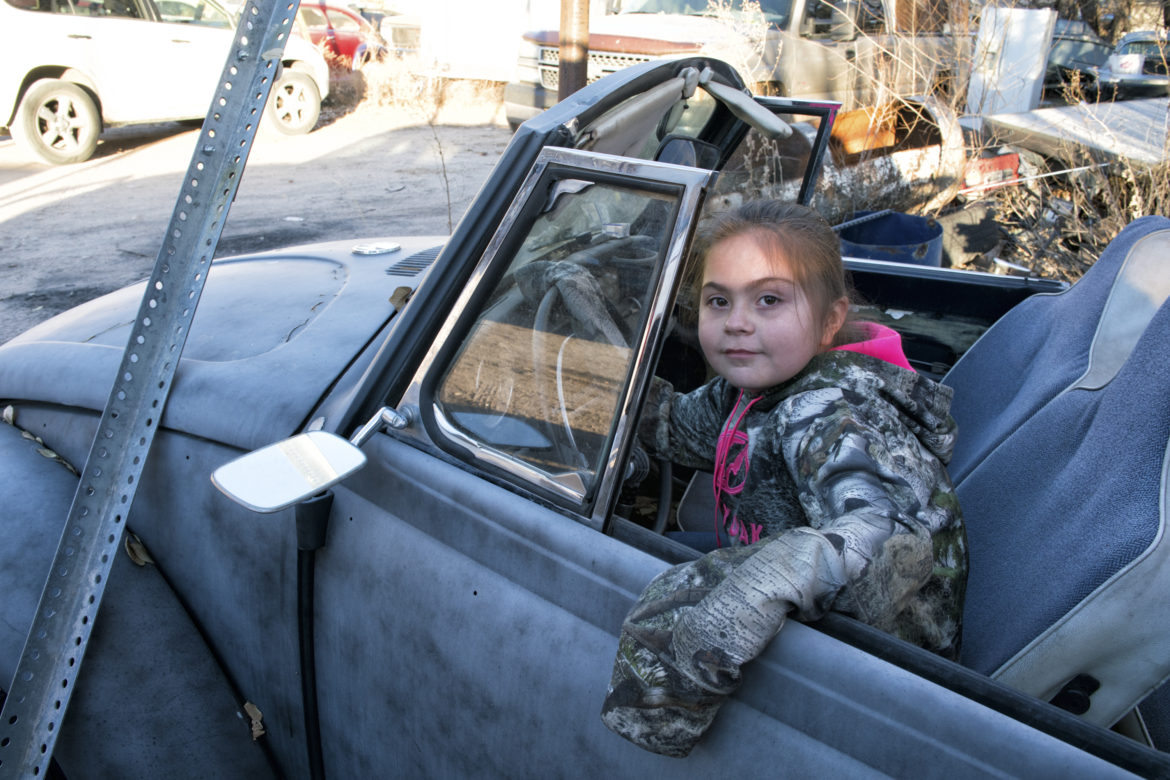 Heaven sits back in her very own Chevy Impala.

“I have two cars — one’s a VW Bug, one’s an Impala,” 7-year-old Heaven Chacon declares from the driver’s seat of a red 1961 Chevrolet Impala. And it’s true, her parents, Bobby Chacon and Pam Jaramillo, affirm: Heaven has chosen a Volkswagen and the Chevy as hers, while her sisters, Angel and Bobbie, have cherry-picked others from the dozens of 40 old vehicles (some restored, others waiting for renovation) that surround the family’s double-wide trailer in Chimayó.

These are no ordinary cars. Bobby, a co-founder of the Los Guys car club, is an aficionado of the custom car style known as the “lowrider.” Although Chimayó is more widely known for its ferociously flavorful chile peppers and for the Santuario, a 19th-century church that draws thousands of visitors to the Chimayó valley each year, lowriding is also a distinctive element of the cultural scene here.

Heaven has been “cruising El Norte” as a passenger since she was an infant. She looks forward to the day she’ll be able to drive the cars herself.

“My favorite things to do are to play outside with my friends, and go horseback riding and go fishing and go hunting,” she proclaims. “I like hunting because I get to shoot a .22, and I love to ride horses because the horses go fast and I don’t slip off — and I also like to go lowriding. It’s my most favorite thing because I get to ride in so many cars — and I don’t have to walk!”

Chimayó is home to some 3,000 people, most of them descendants from Spanish colonists who arrived in the early 1600s, though most families can also trace Native American ancestry. The traditional arts — weaving, wood carving, tin work and retablo-painting — are still practiced here. Many regard the art and craft of building lowriders, which are often decorated with murals derived from traditional imagery, as a natural extension of the people’s knack for self-expression through folk art.

Heaven’s family lives in one of the many mobile homes that now greatly outnumber the old adobe houses in Chimayó, in the middle of a patchwork of largely disused farm fields that spans the valley. Chimayó has never been clearly defined as a distinct town but rather comprises a loose collection of neighborhoods known historically as plazas or placitas.

Fifty years ago, Heaven would have said she was from the Plaza Abajo. It was only with the arrival of the U.S. Postal Service that the distinct barrios were grouped together under one moniker.

The spread-out nature of the community remains, as Chimayó is unincorporated and split between two counties, Rio Arriba and Santa Fe. The lack of public administration and authority leaves it in a kind of “in-between” place, which is both a blessing (taxes are low; rules and regulations are few) and a curse (public services are scarce).

Heaven revels in the rural life, though she acknowledges it has its rigors and challenges. Every year, she and her sisters pile in a big pickup with their father and uncle to drive for hours, buck up ponderosa pine logs and haul them back home to split into firewood. The work is but one of the many chores that Heaven helps with to keep the household going.

Even though the local grade school is only a mile away, her father takes her seven miles to James H. Rodriguez Elementary in Española. “We chose to start Heaven in kindergarten in Española because that’s where her older sister, Angel, and her tios went,” explains her mother, Pam. “And besides, it’s close to Bobby’s work.”

All schools in Rio Arriba County accommodate a large number of children facing learning difficulties, partly attributable to the tough socioeconomic conditions that are prevalent in the region.

In the state with the highest poverty rate in the nation (20.6 percent) Rio Arriba County sits about midway in the county ratings, with 22 percent of its residents living beneath the poverty line. Over 70 percent of K-12 public school students in Rio Arriba County participate in the National School Lunch Program. Circumstances such as these have been linked to low academic achievement and slow rates of academic progress.

Heaven, however, is doing well, earning As in all subjects.

Heaven’s success is no doubt thanks, at least in part, to her stable and supportive family situation.

Heaven’s resilient, bright personality helps, too. When asked to pick a pair of descriptors, she doesn’t hesitate: “Two words that describe me are ‘strong,’ and ‘nice.’”

It’s hard to argue with that characterization when you see Heaven in her camo jacket behind the wheel of her Impala or slinging fire wood into the woodstove — always with a playful grin on her face.