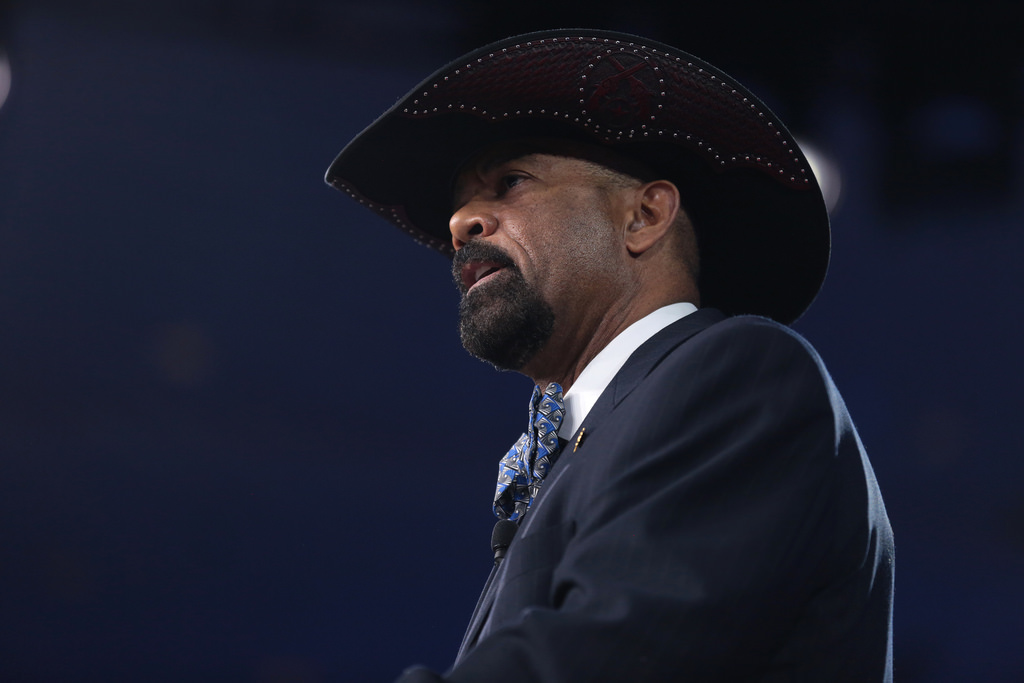 The New Mexico Gang Task Force continues to stand by its controversial choice to give a keynote address at an upcoming conference, even after he advanced a conspiracy theory about the survivors of a recent school shooting.

Earlier this week, Clarke sent a tweet about the students at Marjory Stoneman Douglas High School who have become leaders in advocating against gun violence.

The well ORGANIZED effort by Florida school students demanding gun control has GEORGE SOROS’ FINGERPRINTS all over it. It is similar to how he hijacked and exploited black people’s emotion regarding police use of force incidents into the COP HATING Black Lives Matter movement. pic.twitter.com/XDZ3bcwF6F

This is one of a number of conspiracy theories advanced in the wake of the mass shooting in Parkland, Florida.

The conspiratorial criticisms of the survivors have themselves received criticism, even from conservatives, like the National Review.

When asked about Clarke’s tweet, organizers of the conference responded with a statement standing by their decision to invite Clarke to speak to the group.

Our goal, as the New Mexico Gang Task Force, is to provide high quality, low cost training for law enforcement officers in the state of New Mexico and surrounding states. Each year we look for speakers who can provide a unique experience that our officers can utilize in their training. This year, our conference Keynote Speaker is former Milwaukee Sheriff David Clarke Jr. Ex Sheriff Clarke served the people of Milwaukee County for 15 years and politics aside, his experiences are invaluable to Law Enforcement everywhere. The decision to invite former ex Sheriff Clarke was made by the NMGTF Training Committee, a committee of 10 volunteers. We stand by our decision to have him as our Keynote Speaker.

The task force is a multi-jurisdiction, multi-agency entity that targets gang activity in the state. It was created in 1990, and according to its Facebook page has more than 60 law enforcement member agencies.

Clarke is a staunch conservative and supporter of President Donald Trump.

But it’s not just his political views that’s landed him in controversy. He’s also been criticized and sued for some of his practices while in office.

In 2016, guards at the Milwaukee County jail denied water for an inmate for over a week. That inmate died from dehydration. As sheriff, Clarke oversaw the jail.

This year, the commander of the jail and two other staffers were charged in the death.

A female inmate at the jail received a $6.7 million settlement after she said she was repeatedly raped by a correctional officer.

He has also had personal controversies

Twitter temporarily suspended his account after he posted three anti-media tweets with calls to “punch them in their nose & MAKE THEM TASTE THEIR OWN BLOOD.”

Clarke has a history of advancing conspiracy theories about those he views as political opponents in the past.

Clarke said Black Lives Matter was a hate group and would join forces with ISIS and compared the movement to the Ku Klux Klan.

Clarke also announced he would join the U.S. Department of Homeland Security as an assistant secretary and resigned from his position as sheriff. But days later, he withdrew his name from consideration. In between, CNN reported Clarke plagiarized portions of his master’s thesis on homeland security, something Clarke denied.