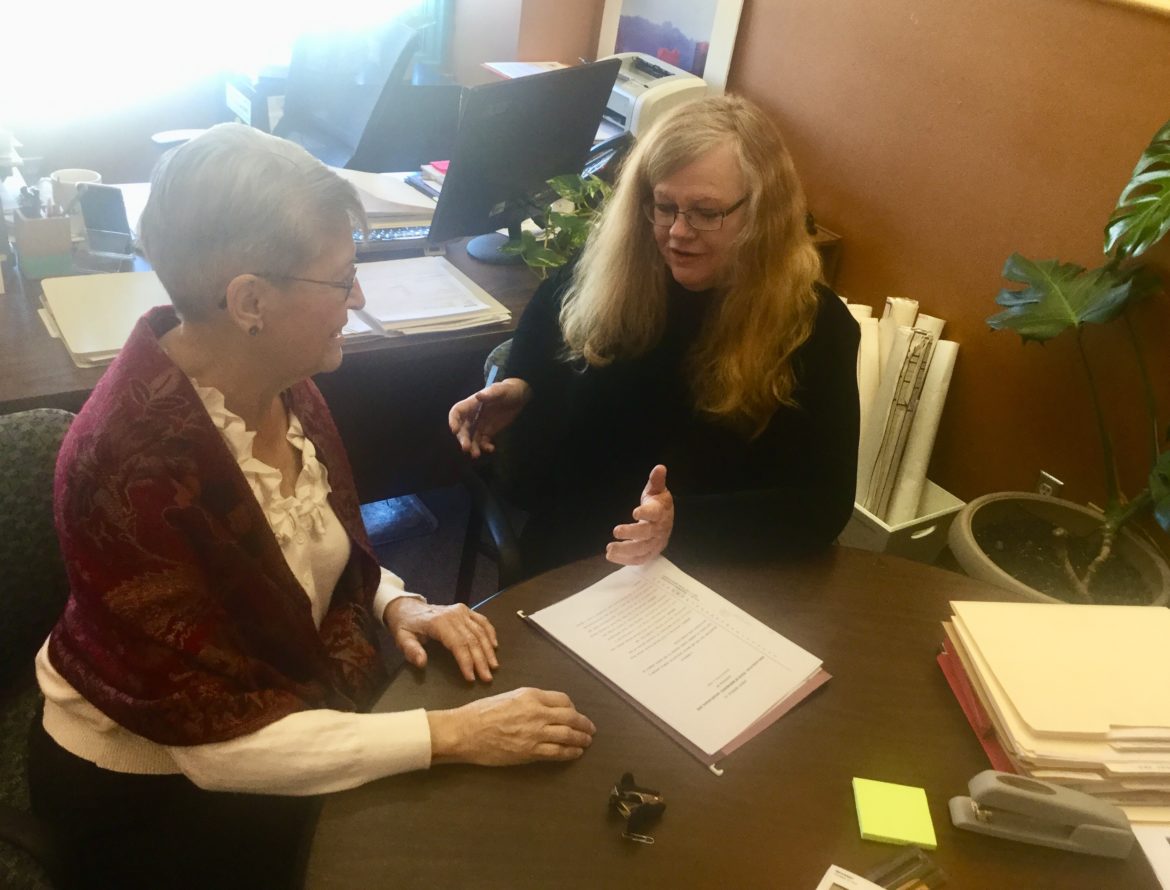 Pamela Stafford (right) confers with her colleague Doris Husted (left) at The Arc of New Mexico's office in Albuquerque. Stafford will assume the agency's policy director role when Husted retires this month.

Ripple effects of the #MeToo movement addressing sexual assault and harassment continue to cascade, from Hollywood to academia, sports to politics. For people like Pamela Stafford who are closest to those at particular risk of assault and harassment, such public conversations feel painfully overdue. “I don’t think there’s been as much of a ripple effect as we would like to see,” she said during an interview last week.

Growing up alongside a disabled sibling pushed Stafford toward a career in advocacy. And today at The Arc of New Mexico, a non-profit offering services for people with intellectual and developmental disabilities, she prepares to take on a new role. The agency’s longtime policy director Doris Husted retires this month. The two women collaborated with other advocates during this year’s 30-day legislative session, which culminated in the passage of a far-reaching guardianship reform bill.

Another proposal with timely implications did not gain traction, despite unanimous approval by the lone committee which heard it. Sponsored by Democratic Senator Jerry Ortiz y Pino, Senate Memorial 61 proposed formation of a state task force to research and improve prevention and treatment of sexual assault against people with disabilities.

The text of this interview was edited for length and clarity.

My understanding is that reproductive health and access to reproductive health services are human rights, and that people have a fundamental right to autonomy when it comes to their own bodies. Can you share some thoughts about how these concepts overlap with the disability community and your work here at The Arc of New Mexico regarding sexual assault and harassment?

People with disabilities have reproductive rights, and they can also be assaulted. … Essentially, people are people. And it’s important to highlight what is a really pretty severe problem.

… One of the issues I’ve seen for women that have been victimized is difficulty in overcoming and resolving traumatic stress and how that can impact reproductive health. A woman may not want to see a doctor or not want to have ongoing gynecological services, to the point of being so terrified of being touched that the only way for her to have a pap smear would be sedation. … There’s not always consistent staffing in a group home environment. People needing personal hygiene support who have also been sexually assaulted creates hygiene issues related to reproductive health, if they’re  not allowing the stranger who just walked through their door to help with hygiene.

The history of enforced sterilization also complicates all of this. In the early 20th-century … the belief was that intellectual disabilities were passed on, which we now know is not the case. We thought we could solve societal ills through eugenics. … The fact is that if I’m a person with ovarian cancer, I will probably need to have my ovaries removed. And today, if a doctor mentions sterilization of someone with developmental disabilities, there are gut reactions, questions about, “Why?” And does the patient have a say in the matter? … Families and individuals also often make decisions about reproductive health based on the fear that the [disabled] person might be abused, might end up pregnant. All of that adds levels of complexity to the discussion about reproductive health.

Stigma surrounding people with disabilities means they often feel subservient, are made to feel that they’re required to follow instructions and are often pressured to simply do what they’re told. An underlying propulsion of sexual assault and harassment is about imbalances of power. Can you talk about how stigmas put people with disabilities at risk and can make it difficult for them to communicate and advocate for themselves if harm has been caused?

You’re talking about a broad range with many vulnerability factors. People may have physical disabilities to the extent that any thought of fighting back is not going to occur. Individuals may be unable to express emotion or facts verbally. Being able to communicate that someone is assaulting them, or that they have been sexually abused, can be very challenging.

You also have people who have never received sex education in school. The basics that we give to the general population are not necessarily done with this population, and people who are isolated, who are lonely, that adds to their vulnerability. … You add in the fact that [disabled] people are often taught to be compliant, because that makes it easier in a public classroom, easier in a more institutionalized setting such as a group home or adult habilitation program. People do what they need to do in order to fit in.

… You have [disabled] people who are terrified about things such as moving into a group home. While we don’t have institutions for people with developmental disabilities in New Mexico, nationwide it’s a problem that we still do. Think about people being told that if they’re not allowed to stay in their home anymore, they’re going to end up in an institution or nursing home. Who will take care of them now?

Where can disabled people turn if they need help disclosing or responding to sexual assault?

They can go to where any typical person goes, but whether or not there is good training in the response is a different issue. Obviously, they should call the police. There has been some training for law enforcement. [Victims of abuse] can also call adult protective services. If a person is receiving services by a paid provider under the Developmentally Disabled Waiver, they can call the division of health improvement, and they will investigate … Hopefully the more we highlight the problem, the more people will become used to reporting.

Can you say anything about educating caregivers about these risks and healthy responses if evidence of abuse emerges?

Not that it’s always staff or non-family caregivers who are the issue, but how do we screen staff and caregivers? There are family issues as well. The NPR series “Abused and Betrayed” used statistics from the Department of Justice that didn’t have anything to do with people living in group homes or institutionalized facilities. It only included people in individual homes. … If you add in other names from institutional and group homes, you are really looking at 70 percent of people with developmental disabilities having been abused, and out of those, about 50 percent have had ten or more occurrences. Those numbers are overwhelming. … We need to have an environment where there are less fears around reporting.

… The silence that can be caused by feelings of complicity is one of many things we all share, when we’re in an institution or a workplace environment, where speaking up about a colleague or supervisor could endanger our own material well-being. People often think that even though they know someone else is being harmed, they have to stay quiet to protect themselves.

If any of this was easy and we had all that answers, that would be a bill and of itself. But the idea behind a task force [to address sexual assault of people with disabilities] is that we need to do some real think-throughs about what is the best way to handle the variety of situations. … The stigma of intellectual disability lends itself to assumptions that that person reporting misunderstood what happened. It’s easier not to believe them. We’ve seen people without disabilities not being believed.

What can our disabled community members teach us all about the importance of bodily autonomy and informed consent when it comes to reproductive health?

Disability is the one minority group we can all join. The longer we live, the more likely it is that we will join it. It’s important to always be aware of that when we are talking about the disabled community. … In my 25 years working with people with developmental disability, I’ve learned many lessons about resiliency. … There are real lessons about the resiliency of human spirit that people with disabilities can provide all of us.