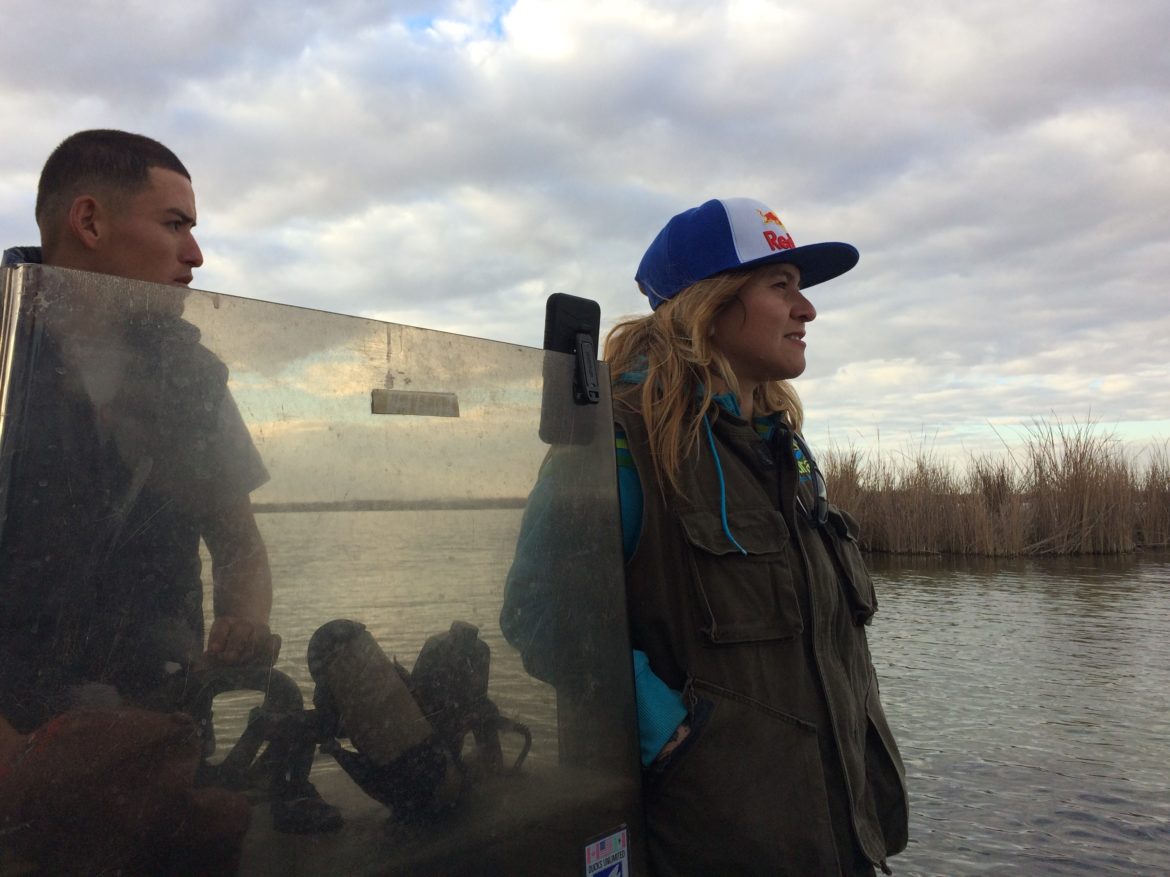 LA CIÉNEGA DE SANTA CLARA, MÉXICO— Alejandra Calvo crosses a barren stretch of desert in Sonora, México almost daily during certain times of the year. The route could easily disappear beneath blowing dust and when rain does fall here, it renders the road impassable. There are no birds or wildlife here, not even any visible plants.

It wasn’t always like this: Until the 1960s, the Colorado River spread across this delta on its path to the Sea of Cortez.

Originally from Chiapas, Calvo is a biologist who works for ProNatura Noroeste, a conservation group based in northwestern Mexico. “Calvo is ‘bald’ in English,” she laughs, and tugs at her long blond hair spilling out from beneath her baseball cap. “That is not me.”

Where the Colorado River Delta once swarmed with life, today its dry sections don’t even support vegetation.

She drives this way to reach an unexpected wetland in the desert. About 30 miles south of San Luis Río Colorado—as the crow flies, not as the roads wind—lie 40,000 acres of salty lagoons and marshy wetlands. Shorebirds and migratory ducks and geese descend here by the tens-of-thousands. Migratory warblers and terns visit, as do rare birds like Yuma Clapper Rails and Piping Plovers.

La Ciénega de Santa Clara, the largest saltwater marsh in the Sonoran Desert, isn’t here because the ocean crept this far inland. Nor is it some remnant from when the Colorado River still reached the sea. Since the 1970s, a canal has dumped water too salty for farms here in the delta. For decades, the United States delivered water across the international border that included saline runoff from American farms. After a treaty amendment requiring the U.S. to reduce the salinity of its deliveries, that runoff was diverted to the Colorado River’s dry floodplain. And there grew La Ciénega de Santa Clara.

Today, as the motorboat passes between stands of cattails, American Coots squeak and flap off into the air. Calvo says families come out here during La Semana Santa, the Holy Week of Easter, and hunters and fishermen visit, too. But for the most part, it’s quiet.

The boat surprises two white pelicans, which lift off the water in a slow, heavy show of impatience. There are herons, too, and as the sun lowers in the winter sky, swallows swarm across the surface of the water, skimming up a drink. Back on shore, grackles hop across stands of saltbush, keeping a close eye on all that’s happening.

As cities and farmers in the United States, not to mention the warming climate, increase pressure on the Colorado River, the Yuma Desalting Plant is again looking like an attractive way to glean more water for Arizona. Built in 1992, the plant has only been operational twice. Were it running again, however, the ciénega would lose its water supply.

That has activists like Calvo, and the National Audubon Society’s Jennifer Pitt, worried. But there are also reasons for hope—here and upstream where Mexican and American activists have worked together on a restoration project in the Colorado River’s historic channel for about a decade.

Binational cooperation on the Colorado

About 40 miles from the ocean, Laguna Grande is the largest restoration site in the delta. The binational Sonoran Institute began work here on patches of existing habitat established when the river flowed through its channel in the late 1990s or early 2000s.

Soon, the project should cover about 800 acres, and it already employs more than 20 people, many of whom live in nearby villages. Families can visit the restoration project, and students come out to tour the newly re-established cottonwood forests. Beavers have returned here, as well as bobcats and coyotes. There are also rodents, raptors and rattlesnakes. The Sonoran Institute leases or buys water from farmers in the Mexicali Valley to support the wetlands, and the more than 250,000 trees they’ve planted here.

Walking through the cottonwood forest, Pitt says this landscape was destroyed before anyone figured out what to do about it. When the Colorado River started running dry in the mid-20th century, there weren’t yet environmental laws to temper or stop destructive operations or policies.

“We didn’t have a regulatory framework, we didn’t have courts, and we didn’t have any leverage,” Pitt says. “We figured that out at some point in the mid-2000s and figured out that as a conservation advocacy community our path forward had to be collaboration and cooperation. We had no choice.”

The United States and Mexico, as well as conservationists and stakeholders on both sides of the border, worked to bring a pulse of water through here in 2014, down the Colorado River to the Sea of Cortez—an initiative Pitt championed while working for the Environmental Defense Fund.

But whether talking about Laguna Grande or the pulse flow, Pitt is careful to note the delta is by no means fully restored. “When we say ‘restoration’…we mean there’s going to be a tiny, little ribbon of green that connects the Upper Gulf to the Colorado River,” she says. “That’s important. But that’s not the delta back again.”

In the intermountain West, 70 percent of all wildlife depend on river corridors for some part of their life cycle, she says. And communities need rivers, too.

“The perspective on rivers that has allowed us, as a society, to manage them unsustainably—where our demands exceed supply, which has devastated the health of rivers—is also set up to devastate communities,” Pitt says. Fixing rivers means stabilizing water supplies for communities, both urban and rural. As water managers and stakeholders wrangle with policy, infrastructure and water uses and rights, they can also be deliberate about healthy rivers—or, she says, “remnants” of healthy rivers.

Unlike in the past, environmentalists and community advocates aren’t always on the outside, unable to apply the brakes to destructive projects or unsustainable policies, she says. And addressing climate change offers the chance to look at things differently, too.

“All those water management systems that seemed in the past so fossilized and unable to adapt to changing social values are now having to change because of climate change and the declining supply,” Pitt says. “As they’re revisiting the policy, which will change the infrastructure, which will change how water is distributed across economies and societies—now is the time for us to be at the table, helping to find the ways to at least not lose more, and in some cases, to try and rebuild.”

Crunching through the fallen cottonwood leaves across Laguna Grande, Pitt grins with the surety of an optimist who just a few years ago watched an unlikely pulse of water crawl and then crusade across the Colorado’s floodplain in Mexico. “It’s an opportunity we didn’t really have 20 years ago.”

This story was reported during a Lower Colorado River fellowship with the Institute for Journalism and Natural Resources. You can read our earlier story, “Looking for lessons along the Colorado River,” here.