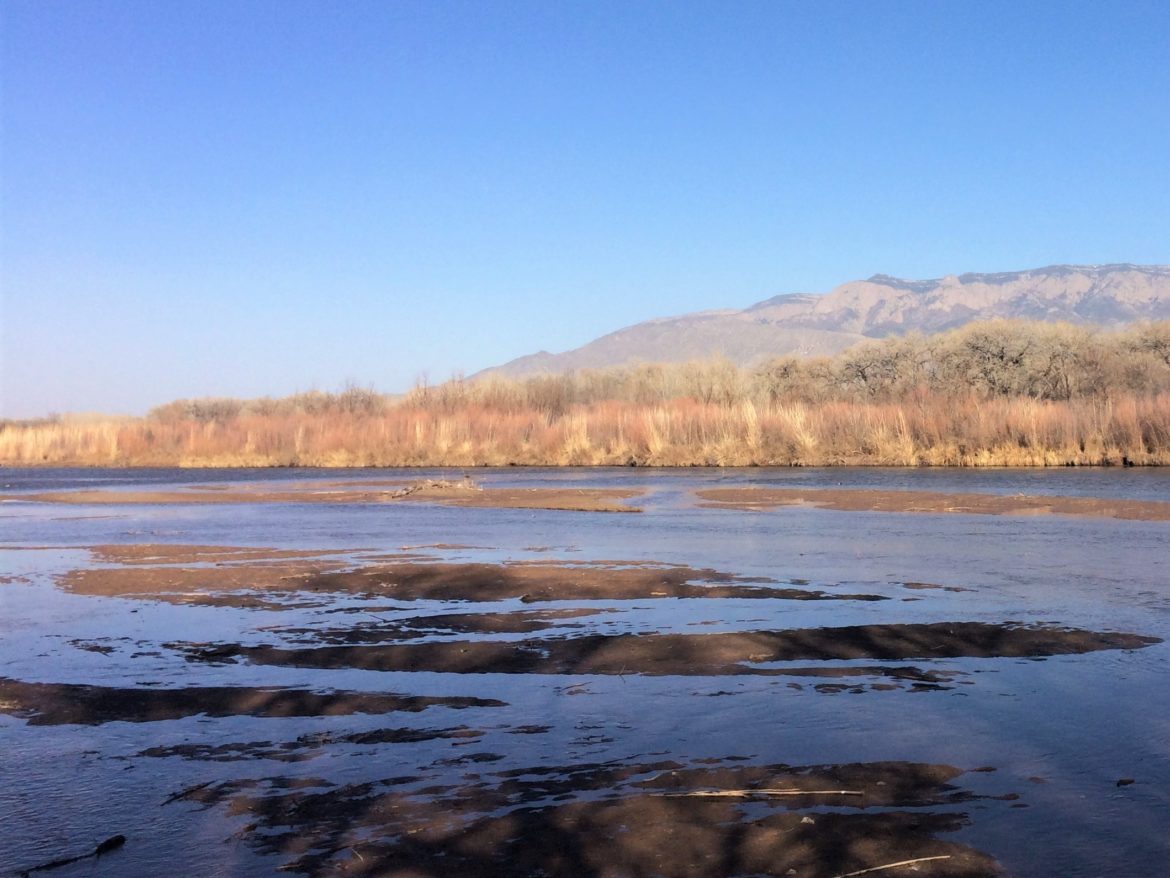 This weekend’s warm and windy conditions were good for hiking or kite-flying. But they were tough on a river everyone is already expecting to be low on runoff this spring and summer.

According to the National Water and Climate Center’s forecast for the Rio Grande Basin, the water supply outlook for spring and summer remains “dire.” In his monthly email, forecast hydrologist Angus Goodbody noted that while storms did hit the mountains in February, particularly along the headwaters in Colorado, snowpack in some parts of the Sangre de Cristo’s continued to decline. That means the river and its tributaries will receive less runoff than normal this spring and summer—and many areas may reach or break historic low flows.

Last week, a new study in the peer-reviewed journal, Nature, also heralded troubling news. According to the authors, more than 90 percent of snow monitoring sites in the western United States showed declines in snowpack—and 33 percent showed significant declines. The trend is visible during all months, states and climates, they write, but are largest in the spring and in the Pacific states and locations with mild winter climates. To drive home the numbers, they noted the decrease in springtime snow water equivalent—the amount of water in snow—when averaged across the entire western U.S. is 25 to 50 cubic kilometers, or about the volume of water Hoover Dam was built to hold in Lake Mead.

And conditions on the Colorado River, which feeds Lake Mead, don’t look good this year.

The March forecast for the Colorado River Basin remains “well below average.” Lake Mead, the largest reservoir in the United States, has already dipped below 40 percent of capacity and its “bathtub ring” is about 130 feet tall. As of Sunday, the lake’s water level was 1,088 feet above sea level. If it reaches 1,075 feet, that will trigger federal rules that cut the amount of water Nevada, Arizona and California can take.

Meanwhile, water users in the three states, including cities like Las Vegas and Los Angeles, the Central Arizona Project, irrigation districts in southern California and tribes, are all keeping a close eye on Lake Mead—and trying to work out a drought contingency plan to avoid those federally-mandated cuts if the reservoir keeps dropping.

At the same time, water managers in New Mexico know they’re also in for a tough year.

The U.S. Bureau of Reclamation watches snowpack and streamflow forecasts closely, said spokeswoman Mary Carlson: “And the current outlook is grim,” she said.

“We are grateful in years like this, when it appears we will have very little runoff from snowmelt, that we are able to rely on the water that has been stored in our reservoirs in previous years,” she said. “Without those reservoirs, conditions on the Rio Grande would be much more extreme in a year like this.”

Reclamation currently has about 12,400 acre-feet of supplemental water in storage, she said, and the agency expects to get another 9,000 to 14,000 acre feet to augment Middle Rio Grande flows.

“We are working with our partners, including our sister agency the Fish and Wildlife Service to determine when and how to use that water to benefit the Rio Grande silvery minnow and other endangered species in the area,” she said.

The Rio Grande Silvery Minnow was listed for protection under the Endangered Species Act in 1994. Two years later, in 1996 about 90 miles of the Rio Grande south of Albuquerque dried. Biologists scrambled over the fish, environmental groups sued, political wars waged and water managers tried to figure out how to serve cities and farmers while keeping the fish from going extinct. For 15 years, the U.S. Fish and Wildlife Service (FWS) required water managers to keep at least 100 cubic feet per second (cfs) of water in the Albuquerque stretch of the river—even if it dried to the south, as it did many years, typically between Las Lunas and the southern boundary of the Bosque del Apache National Wildlife Refuge. Then in 2016, FWS pivoted. Under its new biological opinion for the silvery minnow, the agency said water operations in the Middle Rio Grande were not jeopardizing the fish’s survival. It stopped requiring flow minimums and instead expects Reclamation and its partners to manage the river to improve fish densities.

David Gensler, the hydrologist for the Middle Rio Grande Conservancy District (MRGCD) said the district still has water stored in upstream reservoirs for the valley’s farmers. “But not enough. Reclamation has storage for fish, but not enough,” he said. “(There are) some hard choices facing us.”

Typically, irrigation season runs from March 1 to Oct. 31, but due to dry conditions and low soil moisture, this year, the district started its diversions earlier.

Last year dealt water managers a good hand, Gensler said, but this year will be the opposite. And 2018 is shaping up to be similar to that notoriously-dry 1996. “I’m optimistic we will all come together and manage through it,” he said.

‘This is not a place we’ve been’

It’s not only the middle valley that’s causing concern. WildEarth Guardians attorney Jen Pelz said she’s been looking at flows in northern New Mexico in anticipation of the 50th anniversary of the Wild and Scenic Rivers Act, which Congress passed in 1968 to protect “outstanding” river stretches. Specifically, when looking at Rio Grande records from the late 1960s until now, she noticed some very low years, such as 2013.

“I was looking at how many days were below 100 and 50 cfs, and it was shocking,” she said. “This year’s way worse, and it’s going to be a problem. It’s going to be a huge challenge to do anything good for the river.”

“Colorado’s attitude is that they only have to deliver what the [Rio Grande Compact] said, and if that means no boating in New Mexico, that’s not their problem,” she said, noting that about 150 cfs typically comes in below Colorado and also feeds the Wild and Scenic stretch. “But I’m skeptical and a little scared of what those gages are going to look like, and whether the recreation community in Taos can survive off really low flows.”

She’s also wary about what might happen to the silvery minnow population in the Middle Rio Grande this year. After 2017’s flows, the fish’s population saw a bump, and the fall monitoring numbers were good. “My worry, is all the fish in the river you did have, and the stress of the low flows for an extended time—April through October, large stretches of the river can and will dry —and will you find any fish in the river in October?”

She doesn’t want to see the fish’s population boom, only to bust again. “I’m really concerned about going on good faith that Reclamation, Fish and Wildlife Service, MRGCD will do the right thing,” Pelz said. “They’re stressed and they have their own constituencies.”

Pelz added that last year’s snowpack and water supply was an anomaly in the new climate regime.

Existing laws, like the Endangered Species Act, don’t do enough to protect species and habitats, she said. In fact, she said, it’s time for a whole new language about rivers, as the region continues warming. “This is not a place we’ve been,” she said. “And we don’t know what it looks like.”

River runner and conservationist Steve Harris lives alongside the Rio Grande above New Mexico’s major diversions. Right now near Pilar, the river is clipping along at about 500 cfs, he said.

“It’s beautiful, but soon, irrigation will start and we’ll see what’s really on the mountain,” he said. “Last year was a real joy because it was good for the river and all its denizens, and we had a great rafting season.”

According to Harris, New Mexico has been bailed out by late-season snow before. “But when you think about the long-term climate projections—later onset of snowpack, a shorter snow season, earlier runoff—to me, this year is fulfilling the prophecy.”

Having lived for decades in Terlingua, Texas, Harris also pays attention to the river in his old stomping grounds around Big Bend State Park. “Fifteen years ago, I had a sense we might be moving toward managing the river below the irrigation in El Paso and Juarez,” he said of the roughly 400 miles of the river that are dry in Texas. “Now, it’s not on the horizon to restore the ‘forgotten river.’”

The river dries in southern New Mexico, too. Except during irrigation season when water is moved to farmers, or when storms flood the channel, about 100 miles of the Rio Grande above Mesilla is dry.

“I’m at the point in my life, where I’m thinking, ‘So, what are we doing about the Rio Grande problem? How is society responding?’ Of course, the jury is still out,” he said. “People care, but people tend to be paralyzed by pessimism sometimes, particularly the policy makers, heads of agencies and legislators.”

That doesn’t mean it’s time to give up on the Rio Grande. “I think the Rio Grande’s problem is people expected a lot more out of it than it could normally deliver,” he said. “There has to be a shift of focus back toward the Rio Grande and the dawning general realization that the river’s in trouble if we don’t act, and act on a lot of fronts.”