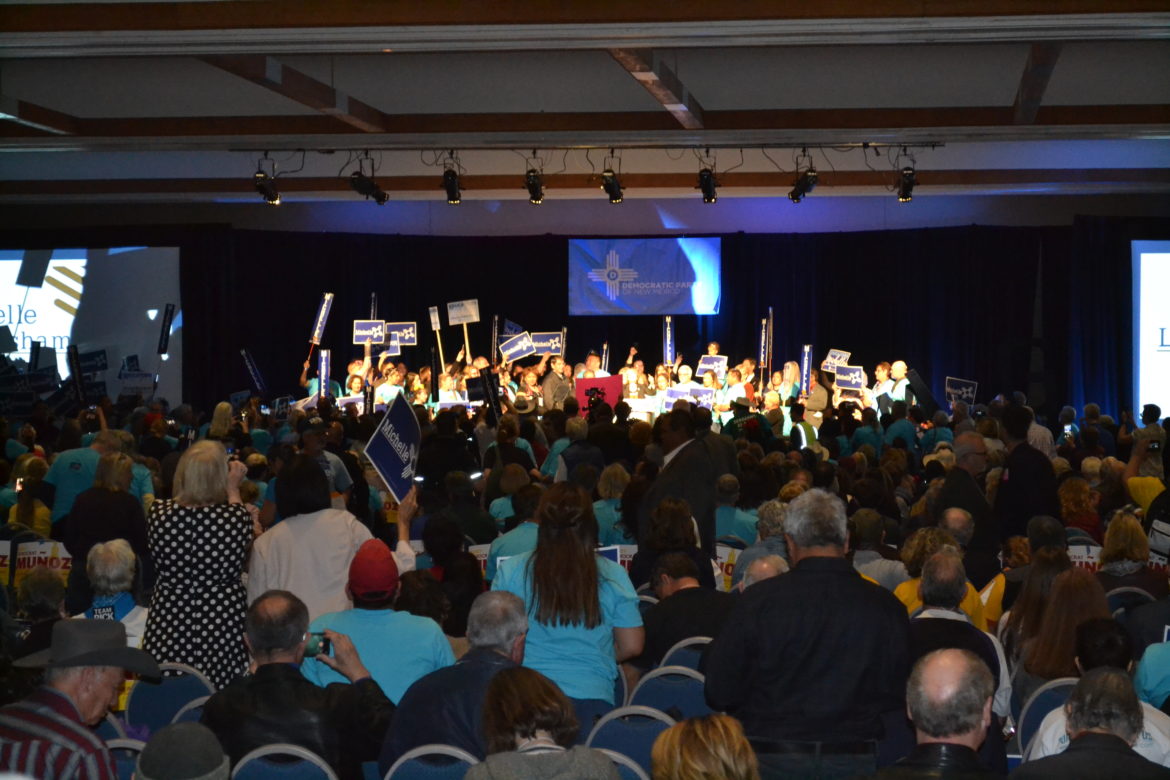 Delegates for the Democratic Party of New Mexico chose their preferred candidates for statewide and federal races Saturday afternoon at the state pre-primary convention. But before candidates finished their stump speeches, a brief protest and an alliance between two gubernatorial candidates caused some excitement.

The Democratic convention showed higher numbers of both the number of candidates and convention attendees than the recent Republican and Libertarian state parties.

Six state and federal candidates emerged from contested races as party favorites for the Democratic primary election in June.

While he denied rumors that he was dropping out, gubernatorial candidate Peter DeBenedittis used his speech to encourage delegates to cast votes for another candidate in the race, Jeff Apodaca. DeBenedittis also accused the state party of being biased in favor of certain candidates, without specifically naming who.

“The Democratic Party has been favoring certain candidates and certain issues,” DeBenedittis said to jeers from the crowd.

Just minutes after DeBenedittis declared his support for Apodaca, a protester interrupted U.S. Rep. Michelle Lujan Grisham’s speech before being removed by police.

State Sen. Howie Morales and former state Rep. Rick Miera are both guaranteed to be on the primary ballot for Lt. Governor. Morales came in first place with 50 percent of the votes and Miera received almost 28 percent.

During her stump speech, Haaland reminded the crowd she would be the first Native American woman in Congress, if elected.

“Congress has never heard a voice like mine,” Haaland said.

Both candidates for the 2nd congressional district secured a spot on the primary ballot.

State Rep. Stephanie Garcia Richard of Los Alamos secured the first spot on the ballot for the Land Commissioner position with almost 44 percent of votes, followed by political newcomer Garrett VeneKlasen with 39 percent.

Both candidates for State Auditor will be on the primary ballot.

“You ask anyone in politics, including the governor, about Bill McCamley and they’ll say one thing, ‘That dude’s a huge pain in the ass,’” McCamley said.

Candidates who failed to get 20 percent of the vote could get on the ballot by collecting extra petition signatures, so the primary ballot could still be lengthy.