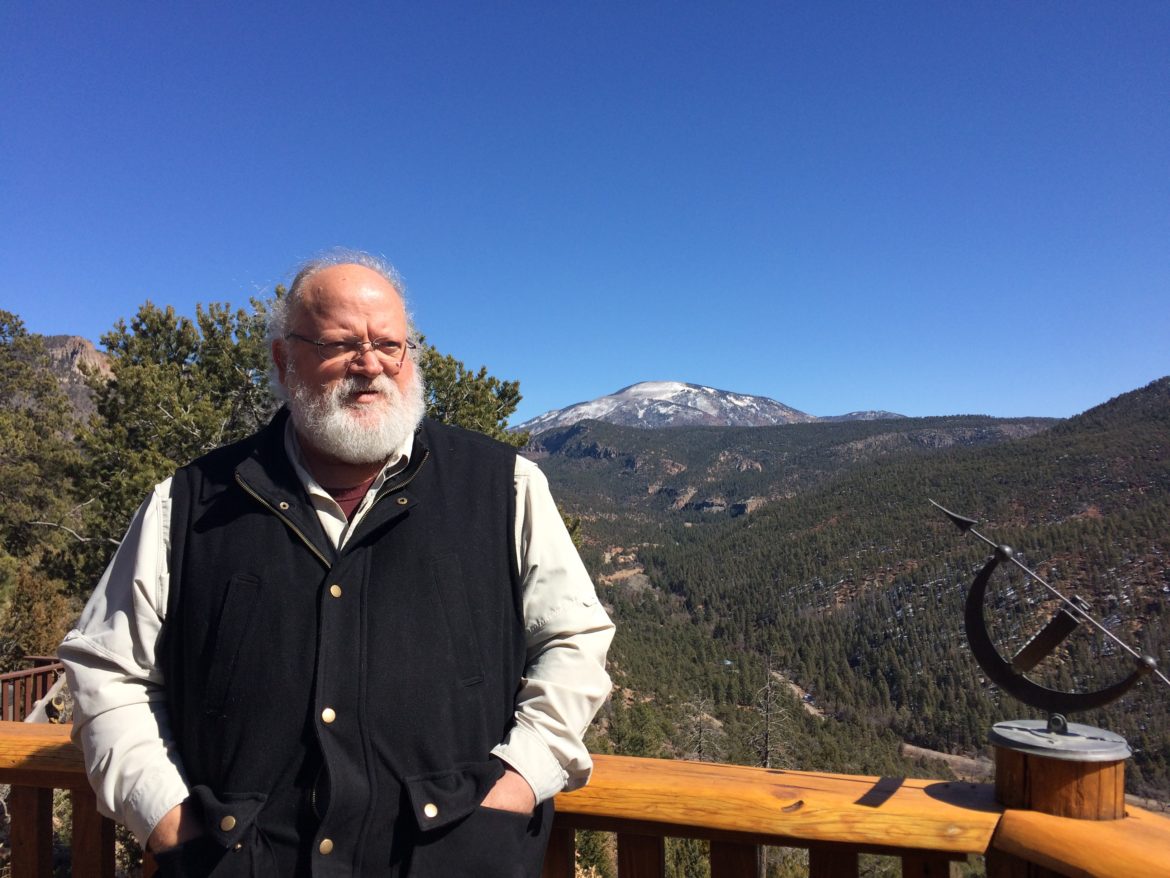 Tom Swetnam with Redondo Peak and scars from the Thompson Ridge Fire behind him.

New Mexico’s wildfire season typically begins in May or June. But it’s only March, and New Mexicans are already dealing with wildfires.

Earlier this month, a fire ignited on Kirtland Air Force Base, burning about 200 acres. The fire’s cause is still under investigation, according to base officials. But a lack of coordination between the base and local fire departments has worried some East Mountain residents.

To the north, the Stateline Fire burned more than 27,000 acres of state and private lands, in New Mexico and Colorado. Wendy Mason, a spokesperson for New Mexico State Forestry, said big fires like Stateline aren’t expected until later in the spring. “That just goes to show how dry it is,” she said. “It was sad to see that drought monitor map start turning colors again this year. We’re definitely on high alert.”

Nearly every square mile of New Mexico is experiencing abnormally dry conditions and moderate drought, according to the most recently released Drought Monitor Map for New Mexico. More than three-quarters of the state is in severe drought, and a quarter, extreme drought.

“Typically, the hottest fires occur after the driest winters and driest springs, so the signs are not good,” said tree-ring expert and forest ecologist Tom Swetnam. “We’re very concerned right now because the moisture is very low, and most of the weather stations around the state are showing that we’re in one of the driest—if not the driest—winters on record.”

Swetnam, University of Arizona professor emeritus, moved back to Jemez Springs a few years ago. He grew up there when his father was a Forest Service ranger in the 1960s. Since then, the forest has changed—and become increasingly vulnerable to wildfires, especially in the last three decades.

“The Jemez is like a poster child for wildfire in forests—what it can do and how extreme it can be,” he said, citing 2011’s Las Conchas Fire, which burned 156,000 acres. That fire grew from 40 to 43,000 acres just in its first 14 hours, something firefighters and experts had never seen before in New Mexico.

High severity, tree-killing fires in the Jemez Mountains since the 1970s through 2017, with most of the fires shown in red occurring since 1996.

From his deck, Swetnam points to where Redondo Peak sports a scar from the 2013 Thompson Ridge Fire, which burned about 24,000 acres of Valles Caldera National Preserve and the Santa Fe National Forest. And he recalls the 2000 Cerro Grande Fire that destroyed hundreds of homes in and around Los Alamos. “That’s what we’re facing as the temperatures keep going up and we’re getting droughts years like this one,” he says. “We’re going to lose more neighborhoods in the Jemez…and I hope we don’t lose human lives.”

He looks down to where the Jemez River cuts a course through the valley and roofs poke out from the dense forest. He estimates there are more than a thousand homes built within overgrown ponderosa pine forest in the Jemez. Some of these neighborhoods can only be reached by steep, dead-end roads. That means there’s only one way in—and one way out. And severe, quick-moving fires can trap people, including firefighters, in those neighborhoods.

Each year, as fuels build up, drought intensifies and temperatures keep warming, the risk for severe fires grows greater and greater. This isn’t unique to the Jemez. Wildfires across the West have grown in number and size since the 1990s—a trend that’s predicated to continue as warming continues.

To protect homes, communities and firefighters from moderate severity fires, thinning trees and making sure your home is “firewise” can help.

“A firewise home means that it’s less likely to catch on fire as a fire approaches,” said Swetnam, who has been helping raise awareness around his own community. Basic steps include moving exposed wood and firewood at least 50 feet from structures, using metal or asphalt shingles and burying propane tanks. “If fire gets under those and starts heating them up, they will pop off a safety valve and start shooting flames out of the top of them,” Swetnam said, “Or, if that safety valve doesn’t work like it’s supposed to, it’ll blow up and it’ll go off like a bomb.”

Swetnam and his wife have thinned their property, leaving only the strongest and oldest ponderosa pines and clearing out the “doghair thicket” of stunted and spindly young trees.

A dirt road separates these two tracts of forest in the Jemez Mountains. On the left is “doghair thicket” and on the right, an area that has been thinned.

Before widespread livestock grazing, and then the late 19th century Forest Service policy of fire suppression, ponderosa pine forests looked more like this: older, widely spaced trees with grasses and forbs running beneath them. Ponderosa forests thrive when periodic, lower-intensity fires burn through the understory. Based on the tree ring record for the Jemez, those types of fires typically burned through areas once or twice a decade, Swetnam said. As fuels built up, however, fires changed, roaring into the canopies and destroying entire forests.

Thinning doesn’t mean clearcutting, Swetnam said: “Most of the trees can stay.” Thinning can cost anywhere from $500 to a few thousand dollars an acre, he said, adding that many local contractors will come out for an evaluation and free estimate. There are also state or federal grants to help with the costs. And homeowners may get lower insurance rates if they take certain steps to protect their homes ahead of wildfires.

“The insurance companies are starting to take notice, especially of fire risk, and in New Mexico we’re starting to see rates are going up,” he said. “Some of this is, I think, because of the loss of homes in California but also in New Mexico.”

Doing all this work isn’t just about protecting your own home.

The Forest Stewards Guild is one nonprofit that helps people prepare their homes and communities for wildfires. “Research has shown that the best defense against wildfire is work that happens around your house,” said Matt Piccarello, the group’s Southwest Assistant Director. Large-scale restoration and thinning projects on public lands are important, he said. But people can also do a lot to protect their homes: clean the gutters, move the woodpile away from the house and sheds, make sure vents are clear and bring patio furniture inside when there are fire embers within a few miles.

Communities and homeowners associations can request seminars, and the group also does home hazard assessments. “We’re here to provide that as best we can,” said Piccello, who added the group has an ambassador’s program. “We’re building capacity for people who might not be experts like firefighters or Forest Service personnel, and having them provide guidance to their neighbors.”

That model has been successful elsewhere in the western United States, said The Forest Stewards Guild’s Esme Cadiente. “It’s really having a citizen voice within the community that will interface with us and with the fire department and other forestry professionals, to gain a foundation they can then pass on to their neighbors and friends,” she said. “It’s more than one person can do from their office.”

And to make it through this year’s fire season—not to mention next year’s, and the year after’s—it will take all hands on deck.

More information and links to resources:

This story was reported in partnership with New Mexico In Focus. To watch this month’s episode of “Our Land: New Mexico’s Environmental Past, Present and Future,” visit here. You can also learn more about the series at the New Mexico In Focus website.