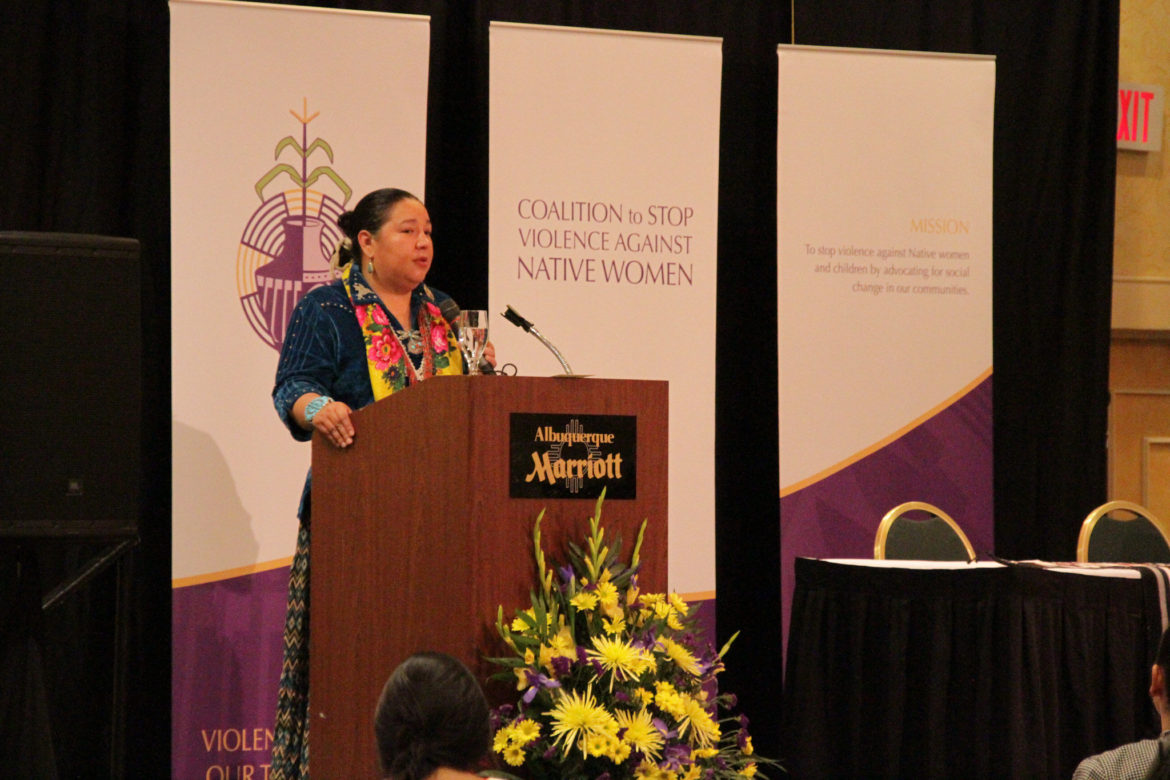 NM Political Report sat down with Cheyenne Antonio, project coordinator for the Coalition’s anti-sex trafficking initiatives, and Kimberly Benally, the Coalition’s training and development manager, after the two-day summit to hear some of their takeaways. Our conversation has been edited for length and clarity.

NMPR: Senators Martin Heinrich and Tom Udall were both invited but didn’t attend this year’s summit, in part because they were in D.C. voting to pass FOSTA, federal legislation intended to hold websites accountable for platforming activities related to prostitution and sex trafficking. While much of the data we have about sex trafficking is anecdotal, a high number of women forced into sex trafficking identify as Native American or Canadian First Nations. If the senators and other absent political leaders had attended the summit, what would you have hoped came to their attention?

Kim Benally: I believe that [Senators] Heinrich and Udall are strong advocates for our people compared to leaders in other states. … I truly believe that both of them have a good grasp on what our communities are facing. I think it would have been important for them to hear specifically from Delegate Crotty on initiatives the Navajo Nation has taken on, because while we do have mainstream sex trafficking, like what you see on Craigslist and Backpage, it does look different in our tribal communities. … Although there is trafficking of our indigenous people outside of our communities, it’s also happening inside of our communities.

Cheyenne Antonio: I do see the need in holding traffickers accountable. … And within this [FOSTA] legislation, I see the good and the bad. I see the loopholes within Backpage and Craigslist, and it’s really hard to hold traffickers accountable. It’s really hard to even hold the owners of businesses accountable as well, as they’re making money out of it. And it’s not just Craigslist and Backpage, it’s also Facebook, Twitter … But then again, I don’t think sex workers should be punished. … I hope that sex workers are a part of the conversation. That’s what we’re trying to do here at the coalition.

NMPR: What do you hear from sex trafficking survivors and sex workers about what their needs are?

Cheyenne Antonio: For sex workers, it’s usually just acceptance. They’re trying to survive, trying to pay their rent, and oftentimes there is a possibility trafficking will happen to them as well. It all depends on who’s walking through their doors.

… Settler colonialism, patriarchy, all of these morals pushed onto our people forcibly have left huge gaps in our identities, even within our beliefs. There are Native people out on the streets who tell us, “They won’t accept me back home because I’m not meeting their expectation of where I should be.” There is a lot of shaming that happens within our communities when it comes to sex trafficking, and when it comes to sex work, especially when it comes down to our LGBTQ relatives. … It’s hard for our communities to accept children for who they are. That says a lot about not only our tribal communities but our culture at large.

I really liked what [Delegate] Amber [Crotty] said … Our victims and survivors, our people in general, already have knee-deep issues that they have to work through—shame within their families and within themselves—and so it’s really hard to seek out support. … It’s difficult for us to find services that will help our victims and survivors with Native-appropriate help.

NMPR: How do we acknowledge problems like sex trafficking in Native communities without further adding to the shame and stigma that they stem from?

Cheyenne Antonio: Definitely inviting the communities to have these conversations is very important. … We need to tell our own stories, to support our own communities and accept them for what they are. What does that look like? I don’t know.

NMPR: Because it may be different in every community?

Cheyenne Antonio: It’s going to be different, from how the Navajo handle it and how Jicarilla Apache handle it, from the eight Northern Pueblos to the Southern Pueblos.

Just to have awareness out there, and setting the groundwork for your community is so important … I was very grateful to witness and hear [tribal] lieutenant governors say, “I’m going to take this home, and we’re going to figure out ways to advocate for our LGBTQ community members for the sake of their safety and to help them.” That alone reminds me why we do this work.

… And we have to acknowledge it. [Sex trafficking] has been going on for 500-plus years. It’s something that has been forced upon us since settler colonialism, since Spanish colonization. … We had to deal with the violence of two conquests, and we’re still here, we’re still thriving. Now we have more impacts coming in, impacts like social media. Social media is a good thing, but it has its negativities as well. That’s what worries me. Our parents don’t know what sites like Snapchat can do. … Social media safety is very limited. …

If you look into our committees, our tribal councils, there are hardly any young people there. I can’t wait until there are more young people working in this field, because then we’ll start to get a better understanding of the beast we’re really facing in our communities. That goes for everything: bootlegging, drug dealing, it’s all online. You can order anything online, including sex. … And we have to look at [legal] jurisdictional issues within and outside our tribal communities as well.

NMPR: How can tribal communities assess and determine for themselves what’s needed?

Kim Benally: One of our building principles within the coalition is that solutions come from within the communities. That would be a good starting place. We do have our inherent problems in all our respective tribal communities, but we also have the solutions. One of the biggest challenges for us is that we just don’t have the resources. … We compete against other tribal nations to get funding.

I’m not Pueblo, I can’t go into a Pueblo community and say, “This is what’s best for you, and this is how we’ll solve this problem.” My job as a coalition member is to work with them and help them build capacity, so they can come up with their own solutions that work for their community.

View all Coalition to Stop Violence Against Native Women articles →