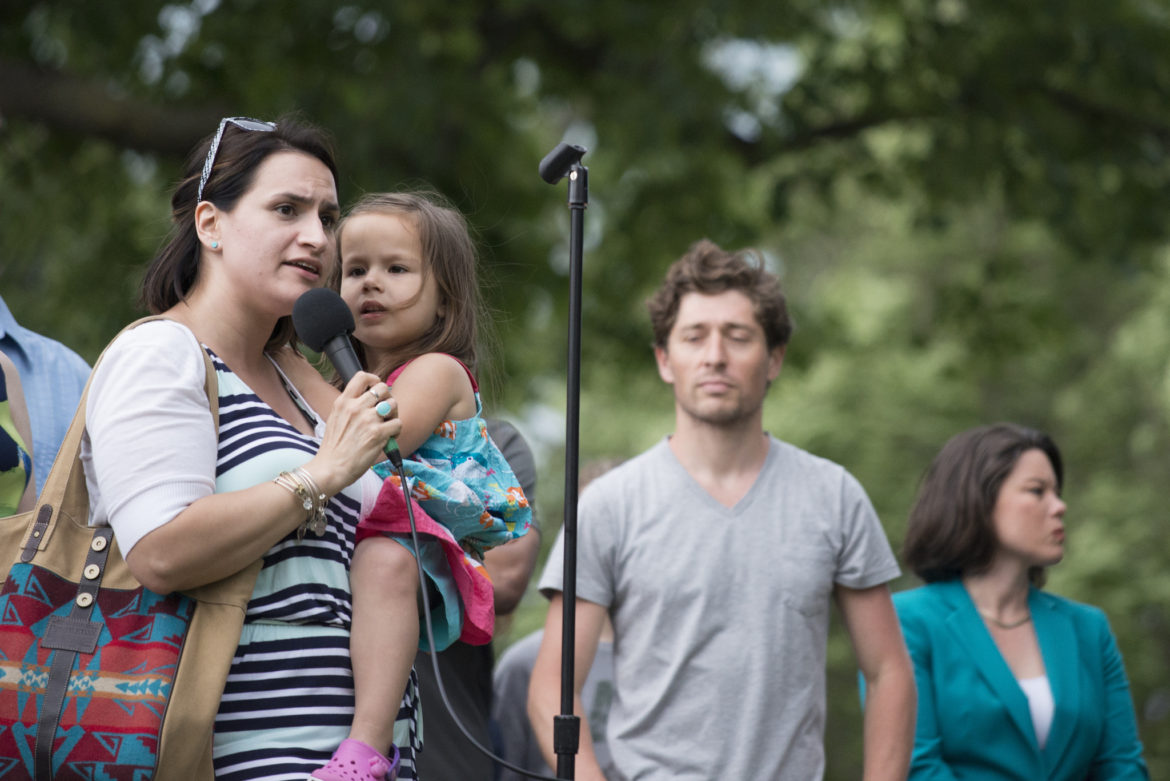 Peggy Flanagan is running for lieutenant governor of Minnesota. Flickr/cc

Indian Country News is a weekly note from High Country News, as we continue to broaden our coverage of tribal affairs across the West.

Patricia Roybal Caballero was a freshman lawmaker in New Mexico’s House of Representatives when she walked into a popular Santa Fe restaurant in 2013 for a meeting with some of her colleagues. Roybal Caballero, a community and economic developer of Piro-Manso-Tiwa ancestry, was by then used to dealing with negative perceptions about her race, but what happened next astounded her.

“Before I had a chance to ask for a table, the hostess said, ‘I am sorry, but we’re not taking applications right now,’” Roybal Caballero told me recently.

For that kind of encounter to happen to a lawmaker in the state capital, in a city with so many people of color, was a reminder of the need for her to be a voice for marginalized people. Although there are 6.6 million Native Americans and Alaska Natives in the country, Roybal Caballero is one of only a few dozen Indigenous state lawmakers. That’s a discrepancy worth considering as we head toward 2018 midterm elections.

“If you look at our Indigenous populations in the state of New Mexico, it is the voice of New Mexico,” she said. “We are what represents the best and worst of histories of the state.”

For Roybal Caballero, racial misconceptions and ignored histories don’t stop at local restaurants. In a December speech at a charter school conference, the state’s education secretary, Christopher Ruszkowski, said America was built on “freedom, choice, competition, options, going West, Manifest Destiny.” Manifest Destiny is a thorny 19th-century concept — a justification of the expansion of American colonialism that destroyed countless Indigenous communities and lives — but here it was again, being glorified.

“It was one of those moments I refer to as an educational and teaching moment,” Roybal Caballero said, “which I’m finding these days to be almost every moment, that we are subjected to these kind of references.”

Roybal Caballero said her mere physical presence can change the tone of a conversation in the statehouse, which in turn can change misconceptions. That’s why the upcoming federal elections have caught her attention, as at least four women across the country are hoping to become the first Indigenous women elected to Congress: Sharice Davids, Deb Halaand, Eve Reyes-Aguirre and Amanda Douglas. Three more Indigenous women are running for governor in Idaho, Hawaii and Minnesota.

“Four in relation to our population in this country may not be seen as significant through the eyes of power and authority, but through our eyes, we know that through our history that just three or four of us can be resounding,” Roybal Caballero said.

Native Americans were not allowed to vote until 1924. It was only 40 years ago that Congress recognized the legal right of Indigenous peoples to practice their religious beliefs. Needless to say, Native communities have never been properly represented in Congress. That legacy of disenfranchisement continues to this day, as Native Americans across the country face a variety of challenges accessing the voting booth and having their concerns met with action.

It isn’t just Indigenous candidates that make this year feel different. In one part of the Navajo Nation, there is hope that redistricting can begin to reverse generations of voting disenfranchisement. In Alaska, efforts are being made to create voting ballots in several Indigenous languages.

“This year seems organic,” Mark Trahant, editor-in-chief of Indian Country Today, told me. “Lots of folks who have decided they must run—now.” Trahant has been tracking Native political candidates for years now, and he said the unprecedented number of Indigenous state and federal candidates has caused him to create a new category in his data set for first-time candidates.

Issues like the dramatic reduction of Bears Ears National Monument, a land sacred to Native peoples, many of whom successfully lobbied to have it designated, have also galvanized voter participation efforts. It probably didn’t hurt voting efforts to have President Donald Trump, who backed the reduction, hang a portrait in the Oval Office of President Andrew Jackson, a man whose embrace of genocide led to the Trail of Tears.

The president’s history with Native Americans is not good. Combined with his continued attacks on Elizabeth Warren’s claim to Native ancestry, sometimes at the most inappropriate of moments, there’s little room for optimism over future relations between tribes and the Trump administration.

The voices of our people have always lacked a proper platform. We have long been marginalized. We have never had a voice in Congress that reflects us as a people. As Roybal Caballero told me: “Even historically, we have had to be our own organizers. We’ve had to lean back on our own traditions. We’ve had to rely on those in order to strengthen our own presence because we have not had anyone.”

Here’s hoping our voices become too loud to ignore.