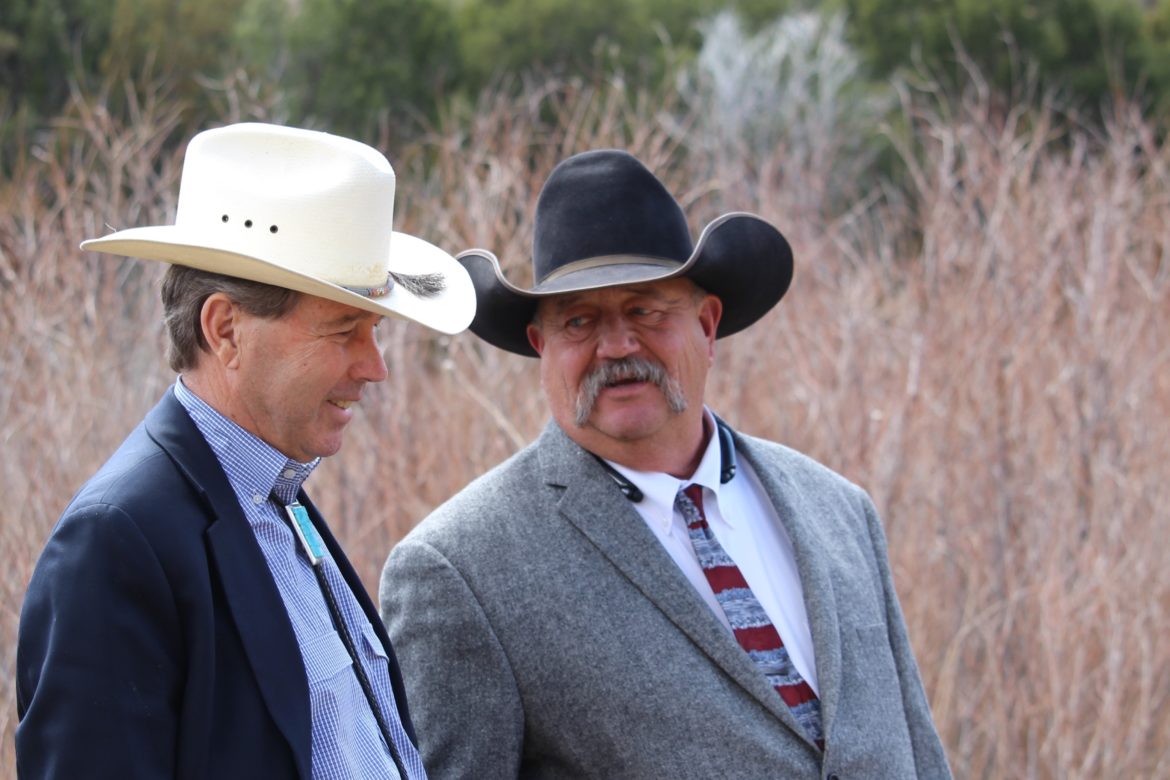 HARDING COUNTY, N.M.—Descending the narrow dirt road into Mills Canyon, U.S. Forest Service District Ranger Michael Atkinson jokes that in the nineteenth century some homesteaders headed to California surely reached the rim of the Canadian River, peered down its 1,000-foot-deep canyon and decided to settle here in New Mexico.

He points to a small stone building on the floodplain below and explains that in the 1880s, Melvin Mills planted thousands of fruit trees. For more than two decades, horses hauled up tons of peaches, pears, apples and cherries, as well as walnuts, chestnuts and almonds. But in 1904, a flood wiped out Mills Canyon Enterprise and now all that’s left are the stone remains of the storehouse and Mills’s home and this wagon road Atkinson twists down.

That’s not the only story this floodplain tells.

This restored section of the Canadian River floodplain was previously crowded with salt cedar (and in the nineteenth century, was home to Mills Canyon Enterprise)

Just a few years ago, this floodplain was a solid bank of salt cedar. The long-lived flowering tree, also called tamarisk, was imported to New England in the early nineteenth century as an ornamental. By the 1880s, it had moved out of gardens and nurseries and across western river banks. And in the early twentieth century the federal government planted salt cedar to slow erosion and keep farmers’ soils from flying into the air.

But the trees did their job too well, armoring the banks of New Mexico’s rivers and narrowing their channels.

That increased the velocity of the water, enhancing the river’s ability to carry sediment, which causes downcutting, said Jack Chatfield, manager of the Canadian River Riparian Restoration Project. As the water blasts downstream and the riverbed keeps cutting deeper, the floodplain is separated not just from the river’s surface water but the water table, too.

Since 2004, the Canadian River Riparian Restoration Project has been working, mile by mile, to reclaim the river and its floodplain in New Mexico. Supported by eight soil and water conservation districts, as well as state and federal agencies, the effort even receives money from the state of Texas. The work is also supported by all five members of New Mexico’s congressional delegation. Last year the five—four Democrats and a Republican—announced a $3.6 million grant through the U.S. Department of Agriculture Natural Resources Conservation Service for the riparian restoration effort.

Last week, Democratic U.S. Sen. Tom Udall took a detour while visiting communities in eastern New Mexico and joined Chatfield, Atkinson and other Forest Service staff at two of the restoration sites along the Canadian.

“My job as an appropriator”—Udall is on the Senate Appropriations Committee—”is to be a guardian of the purse, so to speak, and make sure our money is being well spent,” Udall said. “I really believe this federal money is well-spent, and I’m sure the state partners feel the same way.”

Chatfield himself grew up on a ranch near Hillsboro—he waxes nostalgic about the Arizona sycamore trees there—and now runs cattle east of the tiny town of Mosquero. “They know me,” he said of the ranchers. “Having the trust of your neighbors is a very important part of this job.”

Despite news-grabbing conflicts, ranchers and government officials can work together on watershed and river restoration. “Ranchers, you ask them what they’re trying to do and maybe I can help you accomplish your dream,” said Chatfield, who is also running for the state legislature, hoping to win the seat of fellow Republican Rep. Dennis Roch, who has decided not to run again. “And the agencies have a plan, and if it’s honest and good, I will help them accomplish their goals.”

Ranchers and environmental groups oftentimes clash across the West, but there’s also common ground. “Whatever we don’t agree on, we’ll put it on over in the parking lot,” Chatfield said. “What do we agree on? Well, I think we all want to help the watershed. I think we all know that a healthy watershed is good for everybody.”

The work itself isn’t easy. Riparian restoration work requires coming back year after year. Once the salt cedar has been killed, usually with herbicides, heavy equipment operators knock down the dead trees and masticate them into mulch. And crews keep surveying for re-sprouts, until the seed source has been destroyed and the trees are gone for good.

“My vision is of this being a healthy, functioning ecosystem that has grass and willows and a variety of wildlife, that provides water for recreation, grazing, farming and communities downstream,” Chatfield said. “And I would say that all those things could happen here.”

As drought intensifies again across New Mexico, this type of work along New Mexico’s rivers becomes even more important. “Resilience is key: Drought is a huge stressor, even on a healthy watershed,” Udall said. But healthy watersheds can endure drought better.

When officials tried to slow soil erosion during and after the Dust Bowl, they did the best they could, Chatfield said, but there were unintended consequences—like the impact of salt cedar on the West’s rivers and watersheds.

“Quite honestly, they had a huge problem, and they did a good job,” Chatfield said. “We recently went through the driest period in 125 years in New Mexico—drier than the drought of the Dust Bowl, drier than the drought of the 1950s, but we didn’t wash away and we didn’t blow away, and that is largely due to the fact that today’s farmers and ranchers have better technology, better knowledge of how to manage.”